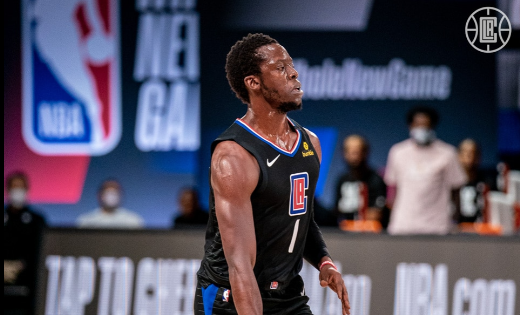 Reggie Jackson Needs To Play Less for Clippers to Thrive

After playing 20 minutes against the Dallas Mavericks in game one, Patrick Beverley hasn’t played since due to a recurring calf injury. Reggie Jackson has been next up off the bench, but as recent performances against Dallas indicate, Jackson needs to play less, not more.

Though the Clippers currently lead the series 2-1, the absence of Beverley is evident on both ends of the floor. As I detailed in a previous piece, Beverley sticks to his role and excels in it. He plays tremendous, physical defense and spaces the floor at a solid clip.

Jackson’s veteran experience failed to show up in 16 minutes of playing time coming off the bench. Jackson went 0-5 from the floor, including a missed shot from deep. He recorded three rebounds and an assist but also picked up two fouls in that span.

In this clip, Trey Burke cuts off Jackson’s path to come around the screen, forcing him to drive towards Boban Marjanovic. Jackson attempts a floater over the towering center only to get blocked from behind. Ideally, you’d want Jackson to look for a kick out pass as the lane to Paul George is open, but Jackson’s narrow focus leads to a block.

Kristaps Porzingis’ ejection made life easier for the Clippers’ defense as they were able to pull out a victory despite shooting 34% from deep. Beverley’s 20 minutes were scattered throughout the game and he played critical crunch time minutes, but Jackson’s series was already off to a rough start. Combine that with his poor play in the seeding games, and the call to have Reggie Jackson play less was already mounting with Clippers fans.

Jackson got the nod from Doc Rivers to start as Beverley didn’t play due to his calf injury. Offensively, Jackson was L.A.’s best three point shooter on the night, going 3-5. Jackson converted on a pullup three for his first make and then roamed the arc for catch-and-shoot attempts on his other two makes.

Jackson’s attempts reminded me of Beverley’s role on offense. Beverley would let the creators create, and when he needed to shoot, he’d shoot. Jackson got to his spots and supported the main cast with triples, but where he really struggled was on the defensive end.

Besides Lou Williams, the Clippers don’t have a reliable backup point guard. Even then, Williams doesn’t play the same role as Beverley. Unfortunately, the defensive drop-off from Beverley to Jackson is significantly steep and the Clippers paid the price in game two.

This play shows Luka Doncic driving down the lane, and a quick hesitation crossover throws Jackson off balance. Jackson fails to recover and it’s an easy layup for Doncic. Jackson’s lack of lateral quickness is on display here. Because of Doncic’s driving abilities and his own defensive weaknesses, Jackson should’ve left more room between him and Doncic to close off the drive. Jackson made it too easy and the help defense arrived late because the play unfolded so quickly.

Doncic has obtained multiple favorable matchups in pick and roll situations and a similar one occurs here. Late in the shot clock, Doncic combines with Porzingis deep in the half court. Situational awareness plays a big role here. Jackson allows Doncic to catch the high pass rather than getting in his grill and disrupting it. Doncic gets space from the screen to make a move and Ivica Zubac cuts off the dribble drive.

Jackson needs to tag back to the “roller”, as there’s not enough time for a roll and Porzingis prefers to pop anyway. Luka reads the defnse immediately and makes the pass to Porzingis who has enough time to get set and shoot. With Zubac also pointing towards Porzingis, Marcus Morris Sr. is the one who closes out. Unfortunately, he was too late, and Kristaps drained it. All that wouldn’t have been necessary if the roller was stopped from initially slipping out. Porzingis is the better three point shooter than Doncic, and though it’s just a difference of four percentage points, you’d take your chances with the 31% shooter in Doncic than Porzingis who is a 35% shooter. Doncic and Porzingis combined for 51 points in this game and you’d have to believe that figure would be lower if Jackson’s defense was adequate.

Doc Rivers made the switch to bring Jackson off the bench and have Landry Shamet start in his place. Jackson played 17 minutes in this game and strictly stuck to catch-and-shoot attempts. Jackson hit 2-4 threes, which isn’t a bad figure, and tried to do less on offense.

In this clip, Dallas forgets Jackson exists in the left corner and it’s a wide open look. Jackson has plenty of time to take the shot. Jackson didn’t attempt anything besides three pointers and it worked in his favor. Through three games, Jackson is 6-18 (33.3%) overall and 5-10 (50%) from deep. Though both are small sample sizes over the course of three games, it’s not surprising that when Jackson sticks to a specific role, he tends to see better results.

The Shamet-Jackson swap worked on both ends. Shamet only managed two points in 18 minutes in game two, but answered the call with 18 points in 27 minutes in game three. Shamet’s presence tied things better defensively than Jackson as well.

The Clippers won’t have an ideal replacement for Beverley when he’s hurt. Maybe Doc gives the youngsters in Rodney McGruder and Terence Mann a run, but Shamet’s performance in game three gives some hope that the team doesn’t need Jackson to play heavy minutes when Beverley is unavailable.

Jackson can be serviceable when he glues himself to a limited role – the less he tries to do, the better. Until Beverley is back, the Clippers need Jackson to do less in his minutes: just hit threes when the opportunities come. That’s the best way Jackson can make an impact for his team.

For now, with Landry Shamet playing well, Reggie Jackson should play less for the Clippers to be at their best.