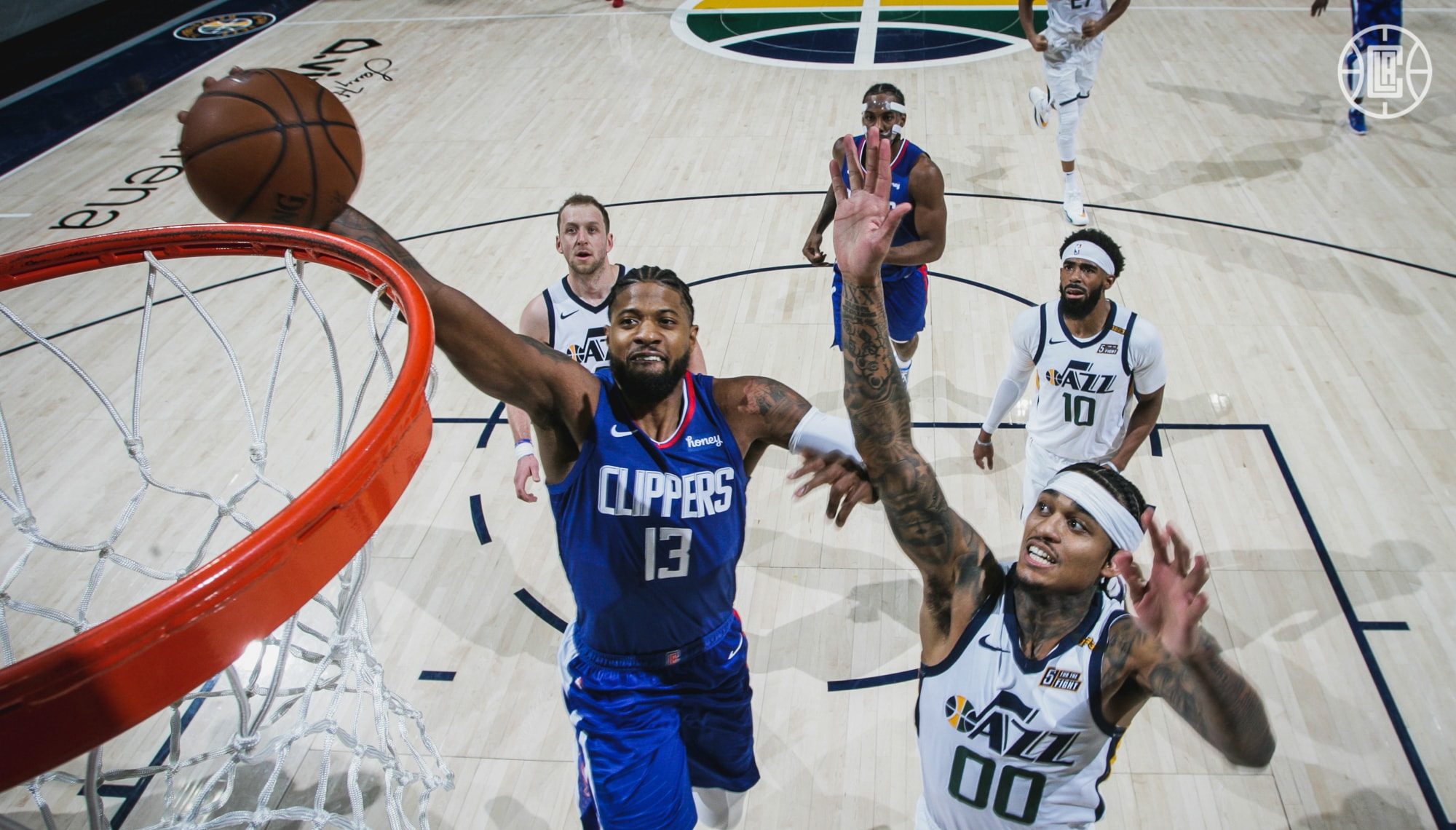 The NBA trade deadline is just a few weeks away, and a lot of the cut-off dates that allow players to be trade have passed, so we are now in full rumors season. One of the NBA’s leading news breakers, Marc Stein, put out a newsletter last night that included some juicy Clippers’ trade rumors, including on Jazz point guard Mike Conley.

Per Stein: “The Clippers… are exploring trade options to fortify their frontcourt beyond Ivica Zubac… “Sources say they have trade interest in Utah’s Mike Conley Jr…The Clippers’ backcourt depth just took a hit with the news that John Wall is out for at least two weeks with an abdominal strain.”

Let’s first unpack that opening statement. It’s vague. One thing that it says, with the “beyond Ivica Zubac” means that Zu himself would be unlikely to move in a deal for such frontcourt support. This makes sense, as even if the Clippers get an upgrade over Zu, trading Zu in the move would just recreate the same depth issue. This probably rules out guys such as Nikola Vucevic and Myles Turner, as I can’t imagine those deals getting done without Zu getting moved. The rest of the wording does support this as more of a shoring up with depth than a renovation. Some names that might fit this bill are Nerlens Noel, Alex Len, or Dewayne Dedmon at a very low level, or Mason Plumlee or Kelly Olynyk in a larger deal.

The second half of Stein’s reporting is a lot more juicy, as Conley is a tangible name (and one who has been linked to the Clippers quite a bit over the past year). For the season, Conley (35), is averaging 10.2 points, 2.1 rebounds, 7.5 assists, and 1.7 turnovers in 29.4 minutes while shooting 38% from the field (42% from two), and 35% from three (5 attempts per game). I have mixed feelings on adding Conley. On one hand, I do think he’s a better overall player than either John Wall or Reggie Jackson. He’s a better defender than either (though is still undersized), takes care of the ball better than either, is a better playmaker than Jackson, and a better shooter than Wall. He doesn’t have the burst of either of them, but would be a steadier hand on both ends of the court. Conley is also an extremely well-respected veteran and leader, and could provide a locker room boost. All well and good, right? Well, there are three issues.

The first is salary. Conley is making $22.7M this season, way more than Reggie or Wall, which means the Clippers would have to add another substantial salary to such a move. While the Clippers do have duplicative depth, the additional pieces would determine how I feel about the deal. If it was both Reggie and Wall for Conley, I’d be ok with it, but the Clippers would be a bit over the cap and would need to add more salary. The other likely players would be Luke Kennard (would not like it), Marcus Morris (would be ok if the Clippers shored up their forward depth), and Robert Covington (would hate it). Reggie and Morris for Conley and Rudy Gay would work, and while Gay is washed offensively, he can still provide serviceable minutes defensively in small-ball lineups, which is ok for depth purposes. Luke instead of Morris would work as well, though I think that’s a huge overpay for Conley at this point. At least it decreases the number of guards by one total and opens another roster spot.

A larger trade that could work is Wall, Jackson, and Morris for Mike Conley and Kelly Olynyk (presumably the Clippers would need to add picks and other assets such as one of their young guys). I’m not sure why the Jazz would do this outside of the “other assets” components, but this would be a move that would strengthen the Clippers’ frontcourt as well as consolidate their backcourt.

However, my main issue with a Mike Conley deal (one outside of a larger move such as the one above) is that it doesn’t really answer the Clippers’ issues. Yes, Conley is better than Wall or Jackson, and any kind of upgrade is good. But Conley is 35, older than both Wall and Jackson, and has missed significant time in two of the previous three seasons. He’s small, not athletic at this point in his career, and an injury risk. The Clippers need youth and athleticism more than anything else, and Conley is actually a step back in those areas, somehow. Gashing the Clippers’ depth for Conley, who is in his mid-30s, seems unwise for a team that’s already rickety. If the Clippers are going after anyone on the Jazz, I’d prefer Olynyk (though he’s no spring chicken) because of his shooting and playmaking ability as a legit big man, or Jarred Vanderbilt, who would add athleticism and energy.

The third issue is that the Clippers have seen some (very limited) success in the past week with Terance Mann at starting point guard, and Ty Lue has indicated Terance will remain in that spot for the foreseeable future. Would a Conley deal just be to upgrade the Wall/Jackson minutes as a backup? If so, I’m fine with it, but that’s ultimately a big trade for a single reserve spot. If it’s to bring him in as the starter, things get worse, as it would either mean Terance stays, shifting PG and Kawhi down spots and making the team smaller, or Terance leaves, making the starting lineup as old as ever. Ultimately, I just don’t see much of a point to the deal, backup point guard upgrade or no.

There are Mike Conley deals that would be acceptable to me, and that I think would probably make the Clippers a better team. But similarly to the Clippers’ pursuit of Marcus Morris in 2020, and Rajon Rondo in 2021, the Clippers’ interest in Mike Conley makes me think the front office does not fully understand the needs of this team. If the Clippers’ big deadline move is adding Conley for a couple of their other veterans, I don’t think the needle will be moved much at all.