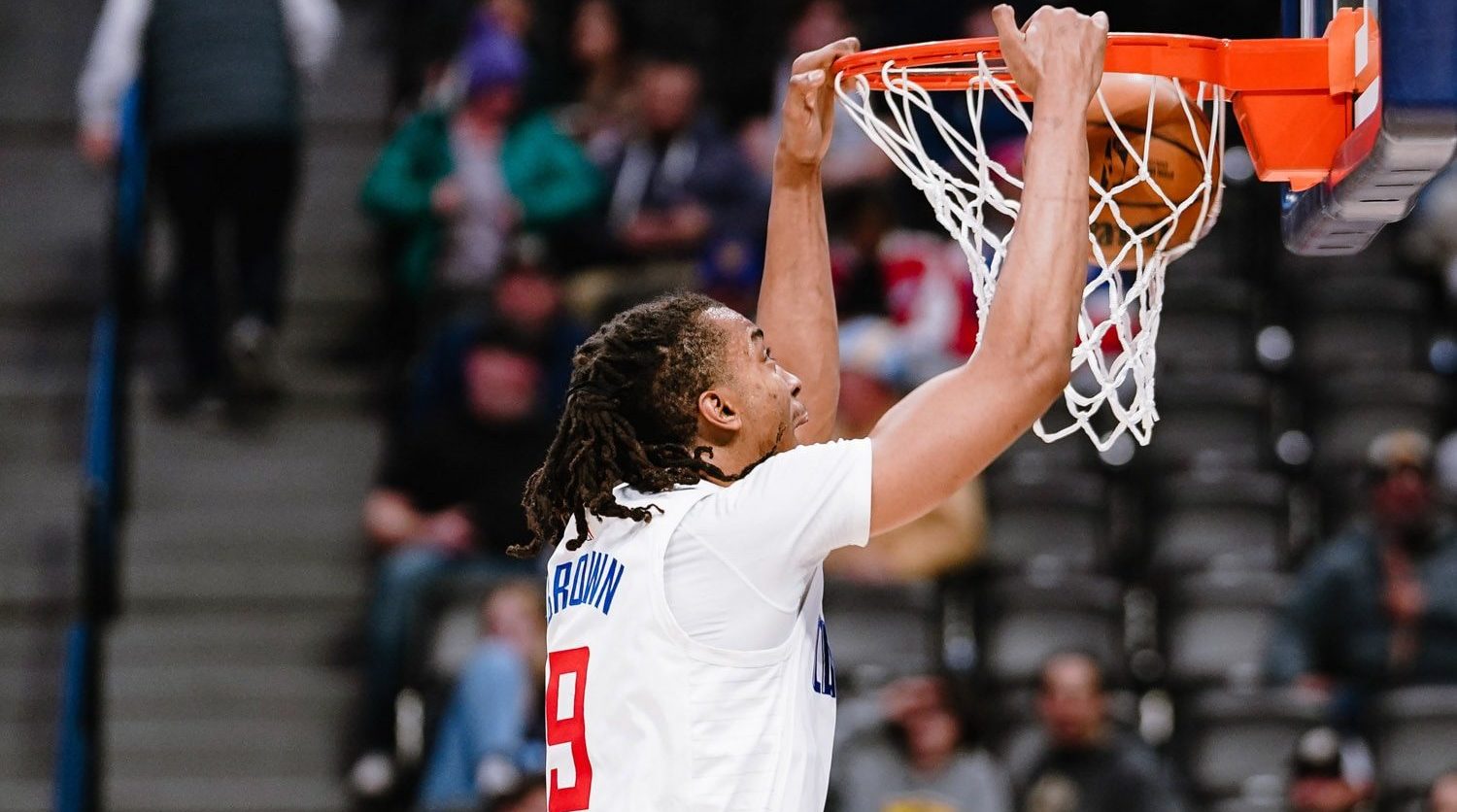 Note: When this piece was originally published, one of the central themes was the idea that January 15th was the deadline to sign new two-way contracts, meaning the Clippers could not replace Moses if they kept him past the 15th. This is the standard rule and has been since two-way contracts were first introduced to the NBA, but it was suspended last year to give teams more flexibility due to COVID impacting availability and roster decisions. After publishing the original post, I was privately notified by several people that the January 15th deadline is also not in effect this season (for unclear reasons, since COVID has had a minimal impact on player availability this year). This information was not publicly available, so while I regret the inaccuracy, I would never have learned it if I hadn’t published the original piece. The article has been updated to reflect that Brown’s two-way spot can be filled with another player past January 15th.

Perhaps the most unheralded player in the Clippers’ organization, two-way contract center Moses Brown has quietly had the best season of his career in an inconsistent role off of the bench for Ty Lue this year. It’s not necessarily saying much, as Moses’ first three seasons in the league saw him feature for four different teams and struggle severely at each stop, eventually being released. But nonetheless, in his 5th NBA opportunity in Los Angeles, he’s scoring and rebounding at higher rates than any of his prior stops and beating his career average for shooting efficiency (61.9% vs 56.6%, both bad marks for a center who only shoots at the rim but one notably less bad).

As January drags on, the Clippers will be forced into a decision on Moses Brown’s future with the team. A two-way player can be active for up to 50 of his team’s games in a single season (pro-rated for deals signed mid-season). Moses Brown has been active 44 times for LAC this year, setting up an obvious looming decision: he can only play six more games before they have to choose between keeping him the rest of the year, or having to go without a backup center until they find a veteran in buyout season. However, they can use 10-day contracts to stretch his availability.

As I mentioned at the start, this has been the best season of Moses’ career. At 7’2″, he’s one of the tallest player in the NBA, with lanky limbs that present Boban-like complications to opponents on the glass. In fact, he is second in the NBA in TRB% (total rebound percentage, or the percentage of available rebounds a player grabs while on the floor) among players who have played at least 200 minutes, behind only Andre Drummond. When he checks in, he works hard and has impacted games with his size, and he has actually seemingly worked his way into Ty Lue’s rotation of late. However, this has been with Nico Batum, who has been the primary backup center this season, starting in place of injured star Paul George, so there is some reason to believe that George’s return might push Batum back into that role and in turn remove Brown from the rotation altogether.

While Moses has overall done what has been asked of him this year, his limitations are no secret. As a roll man, he is relatively inefficient for his size, making just 66.7% of his shots at the rim and 79.5% of his dunk attempts (Ivica Zubac, who does not exactly count finishing in traffic as a strength, is at 68.1% and 83.3% this season after 71.5/89.4 last year). Those numbers aren’t terrible, but they are significantly better than Moses has done in past opportunities, which could suggest regression is looming. Regardless, the bigger concern by far is his lack of mobility defensively–while he runs fast in a straight line, he is almost entirely confined to the restricted zone defensively due to a lack of lateral agility, giving opposing guards huge amounts of space in the pick-and-roll. It is this, primarily, that causes me to think that Moses is not going to get a rest-of-season contract from the Clippers–my assumption has always been that eventually, whether via trade or the buyout market, LAC would bring in a veteran center with more playoff utility.

So, if we accept that Moses sticking around for the rest of the year is unlikely, but acknowledge that he’s doing a job for the team right now that seems likely to continue for some undetermined short span of time as Paul George works his way back into the lineup, then the Clippers are left trying to squeeze whatever possible out of his remaining tenure.

Without signing him for the rest of the year, the way to maximize Moses’ games played as a Clipper is to play him his 6 more active contests (beginning Sunday vs Houston), and then cut him and sign him to two 10-days. Moses’ 6 remaining active nights don’t have to be the next 6 games, either–so hypothetically, if George were to return and the team were to resume a normal rotation with Batum playing backup C and Moses on garbage time duty, they could deactivate Brown and “save” him for games where they know he will play. For example, the Clippers kick off a road trip this week by playing the Sixers at home on Tuesday and visiting the Utah Jazz on Wednesday. Even if George is back, it is unlikely that Kawhi Leonard will play in both games, likely meaning Batum starting in his place and Brown pushed into backup duty again. The downside with this plan is that garbage time is one of Moses’ main duties to buy Zubac (and the Clippers’ ancient PF options) rest. The team could always bring up Moussa Diabate to fill that role, but the entire point of this arrangement with Moses was to keep Diabate in the G-League playing starter’s minutes instead of riding the bench for the NBA club.

If the Clippers used Moses’ last 6 games on their next 6 games, his two-way eligibility would be used up January 24th vs the Lakers. He could sign his first 10-day on January 26th, covering 6 games before expiring on February 4th. A second 10-day would run through the trade deadline and be able to cover all but one of the Clippers’ games before the All-Star break, essentially giving the team a second center up through the point where they are likely to be able to acquire the player who they want to have that spot for the remainder of the season and into the playoffs.

If the Clippers release Moses’ two-way contract once his 50 games have expired, they will be able to replace him with a new two-way player. This requires waiving Moses, which would let him go to another team if given the opportunity, but if the Clippers aren’t willing to give him a spot on the 15-man roster then they should give him that freedom (they would need to waive him to re-sign him to 10-day deals anyway). Brown is not eligible for two-way play next season, so there is no future for him in his current role–he will have to make someone’s top 15 next year.

Then, the Clippers could identify a G-League player to sign to a two-way deal tomorrow afternoon and have him available to make appearances down the stretch of the regular season. The exact number of appearances allowed on a two-way contract is pro-rated based on when during the season a player is signed, but the Clippers could likely get 15-20 games out of a Moses replacement. For example, Nate Darling is a 6’6″ guard who has been a standout for the Ontario Clippers, averaging 20 points and shooting 44% from three in 19 showcase cup games this season. Former Clipper Xavier Moon is also featuring for Ontario and is well-liked by Clippers players and coaches alike, potentially giving a group that is struggling with morale a vibes boost and a deep bench PG option so that Jason Preston can stay in Ontario and get reps instead of being called up intermittently for potential garbage time duty. There are also a number of centers around the G-League who could be brought in to attempt to replicate Brown’s role as the team continues searching for a veteran big man.

Ultimately, as I said, I do think that they are unlikely to end up keeping Moses on a rest-of-season deal on the 15-man roster. Even though he has been solid and done what is asked of him this season, when it comes to playoff utility it feels like the Clippers can find a more dependable option for a backup big. The resulting scenario is that they will also likely add a new two-way player in the coming weeks to fill Moses’ spot once he reaches his games limit.