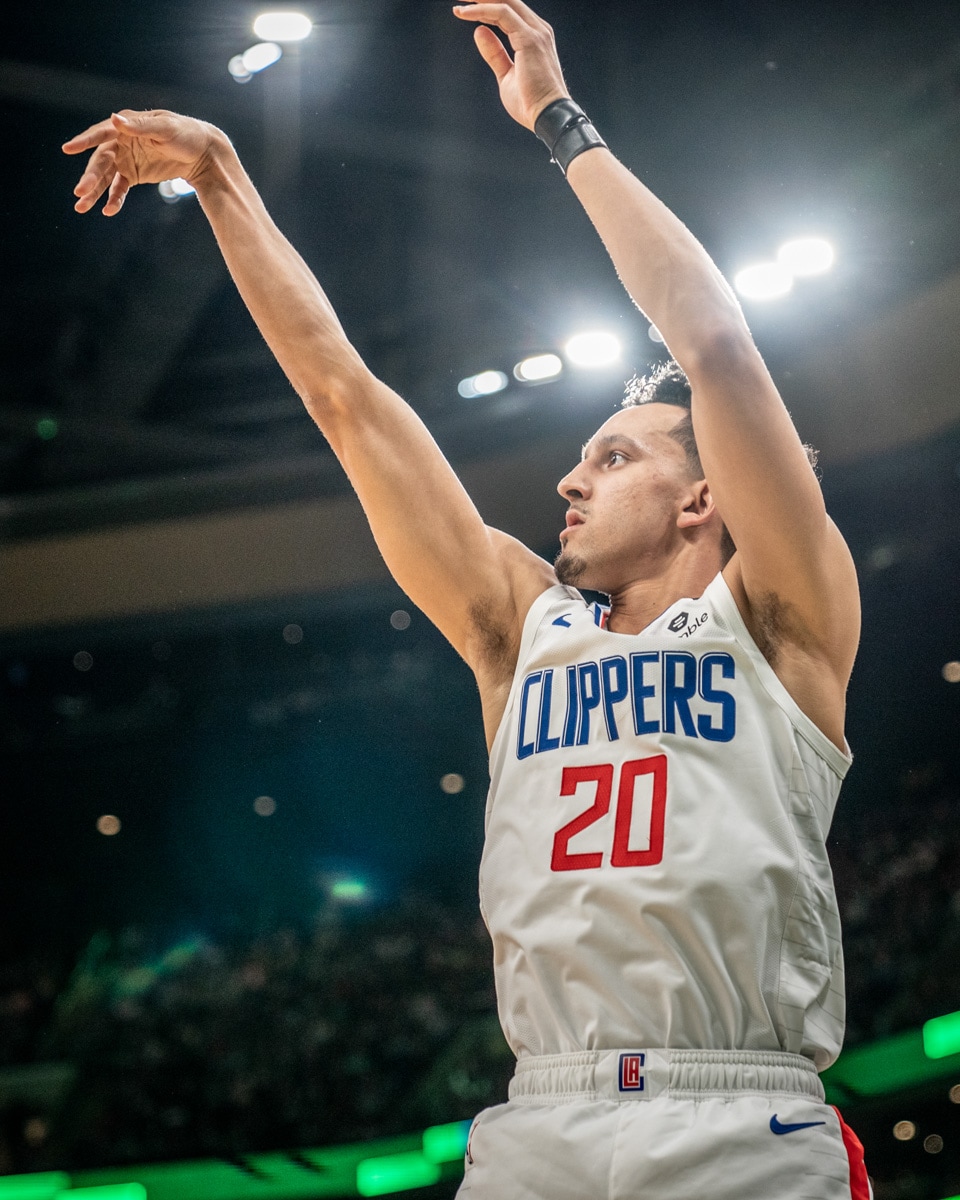 Landry Shamet: More Than a Shooter

When Landry Shamet arrived in Los Angeles after being part of the shocking deal that sent Tobias Harris to the Philadelphia 76ers, not many fans knew a lot about the 26th pick in the 2018 NBA draft.

Shortly after the trade went down, Doc Rivers received a text message from a former Clipper, and Shamet’s teammate in Philly, that endorsed the rookie with high praise. “Redick told me what we were getting back when we got him. He texted and told me ‘You won’t believe how focused this guy is. This guy does not act his age’,” Doc told the media.

JJ Redick, one of the greatest shooters the game has seen, saw something in Shamet that transcended his ability on the floor. It took Shamet all of one game as a Clipper to prove to his new team that the praise from Redick was perhaps even an understatement.

It took Landry Shamet just one game to win over his new fanbase. In the first game after the trade deadline, the Clippers were in Boston for what felt like a season-altering showdown. The Clippers’ front office had stayed consistent about their goal of pursuing the playoffs despite dealing Tobias; however, the play on the court in the first half of that Boston game left fans feeling as if the lottery was inevitable.

The Clippers were narrowly holding onto the 8th seed in the Western Conference, and at the time it seemed as if keeping their lottery pick that ironically was owed to Boston if it fell out of the top-14 would be the wisest course of action. A feeling of bittersweet contentment fell over the fanbase after going down 28 points in that first half, because while it seemed like the playoff hopes were dark, the future was not.

This notion lasted for about as long as halftime did, because Landry Shamet and the rest of the squad began asserting their will on that ballgame. The Clippers would go on to come back from what was at the time a franchise record 28-point deficit, and defeat the Celtics on the road. They were led by Shamet’s 17 points and 4 threes, all of which came in the 4th quarter.

It was mentioned that the 28-point comeback in Boston was the largest in franchise history “at that time.” That’s because just two months later, the Clippers pulled off the greatest comeback in NBA Playoff history by overcoming a 31-point deficit to defeat the Warriors on the road. Like his first game as a Clipper, Landry Shamet was right in the middle of this historic comeback as well.

Shamet’s go-ahead shot off the pass from Shai Gilgeous-Alexander, is arguably the most iconic shot in franchise history. It can only be rivaled by CP3’s Game 7 winner, but ranks right up there with it. The rookie sniper was only a Clipper for a few months before the summer hit, but everyone who watched him could tell that the Clippers got a good one.

A transformative summer saw the Clippers go from a gritty 8-seed starting two rookies, to the favorites to win it all. With this new ceiling came new expectations. High expectations always come with the territory of being a team with championship aspirations, with each member of the organization put under a microscope. Highly coveted sophomore Landry Shamet was no exception to this reality. Fans have seen it happen with Lou Williams, Montrezl Harrell, Doc Rivers, and even Paul George. Every flaw, miscue, and shortcoming is magnified when building a championship caliber team. Despite making the radical transition from a specialist on an 8-seed to a pivotal key to a team’s title hopes, Landry Shamet has proven that he is made for this.

Shamet broke rookie records with his three-point shooting last season, so the expectations coming into the 2019-20 campaign were immense. He has exceeded all expectations in ways that are obvious and in ways that are more abstract. Despite a new role with new expectations, his shooting has not missed a beat. Sham is shooting 43.6% from the field, 41% from behind the arc, and 91.8% from the charity stripe. Those marks accumulate for a 62.1 TS%, which is up from the 60.4% mark he posted in his record-breaking rookie campaign. The expectations went up, and so has Shamet’s play.

Not only are these shooting marks impressive in their own right, but they rank among the league’s best. Of all players taking at least 6 3PA per game, Shamet ranks 7th at 41%. Due to his role in the offense, the majority of these looks come off of catch and shoot attempts. He has been even better on these shots, as his 42.1% clip on catch and shoot threes ranks 6th in the league among players taking at least 5 per game. Landry Shamet is a special shooter.

It was previously mentioned that Shamet’s acclimation to his new team came through his clutch gene. That has not left him this season, as he is literally yet to miss a clutch 3PA in the 2019-20 campaign. Of the five threes that Sham has put up in clutch minutes this season, all five have found the bottom of the net.

Shamet being this elite a shooter does wonders for the Clippers’ offense. This was on full display in a game on the road earlier this season against the Miami Heat. It was evident from the opening tip that Miami was going to force the ball out of Kawhi’s hands by running a double at him every catch. Shamet was the beneficiary of this defensive decision by the Heat, and ended up draining six threes in a big 122-117 win against the league’s best home team.

The game against Miami was not a rare occurrence, as teams have often shown a desire to trap Kawhi any given chance. With the addition of Marcus Morris, defenses can no longer trap Kawhi without leaving at least one of three or four prolific shooters alone. Shamet’s ability from beyond the arc forces teams to either play Kawhi straight up, or risk leaving a shooter open for three.

The stats support this assertion that Shamet’s mere presence on the floor is a game changer for Kawhi and the entire offense. Kawhi and Shamet have played 633 minutes together, and that duo has posted a 115.9 ORTG. In the 730 minutes Kawhi has played without Shamet, that ORTG drops to 112.8. Both marks are exceptional, but Kawhi is undoubtedly able to operate to his fullest potential when playing alongside Sham.

There is no debating the impact that Shamet has offensively, but as previously mentioned, each player on this roster is operating under a microscope. The critiques of Shamet this season have come on the defensive end.

After analyzing the stats, there is a real correlation between a player who is bad on defense and a player who plays too many minutes next to Lou Williams. As a 6’4″ 190 LB guard, Shamet holds his own on the defensive side of the ball. The problem is that his backcourt running mate in the 2nd unit does not. Landry Shamet has played 1,110 minutes this season; 640 of these have come alongside Lou, and the other 470 have come without Lou. In the 640 minutes Sham has played with Lou, the duo has a 110.5 DRTG and -1.0 NRTG. In the 470 minutes Sham has played without Lou, he has a 101.6 DRTG and +10.2 NRTG. That is a drastic difference.

This brings up a dilemma. If the Lou/Shamet lineups are so bad, and the Shamet without Lou lineups are so good, why has the majority of Shamet’s playing time come with Lou? That is a question that is going to need answering before the Clippers set their rotations for the playoffs. Lou tanks the DRTG of literally everyone he plays with, so it is understandable that Shamet could be perceived as a poor defender when he plays the majority of his minutes alongside one of the league’s worst.

On the other hand, Shamet’s DRTG alongside Kawhi is superb. As already mentioned, the duo of Shamet and Kawhi has played 633 minutes together. Of those 633 minutes, 385 have come without Lou. The duo is posting a 101.3 DRTG in the non-Lou minutes. When Lou is added into the fold, the DRTG inflates to 107.5 in 249 minutes. It doesn’t matter who Lou is playing with, the defense is going to suffer.

To further solidify the case that Shamet is not the problem defensively, let’s analyze a few more lineups. The trio of Patrick Beverley, Kawhi Leonard, and Landry Shamet, boasts a 96.2 DRTG and +23.8 NRTG in 274 minutes together. Those are absurd marks. Now, for the trio of Shamet, Lou, and Trezz, the numbers are not so great. In 460 minutes together, Sham, Lou, and Trezz post a 110.9 DRTG and -1.0 NRTG. Injuries have played a factor in the minutes disparity between these two lineups, but the sample size is large enough to show that Shamet does not belong with Lou.

The numbers previously discussed are not just a product of Sham’s shooting ability. What separates his ceiling from a guy like JJ Redick, is his ability to create off the bounce and get his own in the short mid-range or at the rim. With a player as deadly of a shooter as Shamet is, defenses are going to close at him hard. This opens up the opportunity for him to get inside the defense and pull up for that short mid-range shot, or continue driving to the hole.

The two shots previously mentioned are synonymous with one another. After being chased off the three-point line, we have seen Shamet put the ball on the floor and either rise and fire from the free-throw line area, or continue his drive to the cup. So far this season, Shamet is shooting 66.7% (26-39) within 5-feet and 61.5% (8-13) from 10-14 feet. While neither one of these shots are Sham’s primary weapon, just having them available adds to his versatility.

Another opportunity that Sham’s gravity creates, is the chance to find his teammates. Whether he is playing on the ball, or capitalizing on over-aggressive closeouts, Shamet being a capable passer adds to his impact on the entire Clippers’ offense. Shamet’s 2.33 AST/TO ratio, while not overwhelming, is more than serviceable for the role he plays. For reference, that mark ranks above proven passers such as Ben Simmons, Lonzo Ball, and Jrue Holiday. Now, clearly Shamet is in no way the passer that those three are. Those players all handle the ball at a much higher rate than Shamet does; however, it is still a good reference to use when analyzing how effective of a passer Shamet is in the opportunities he is given.

With a team headlined by Kawhi Leonard and Paul George, it can be easy to overlook essentially everyone else. For a guy like Landry Shamet, who outside of his own fanbase is known as just a solid shooter, it is even more likely that the level of player he is will often go unappreciated. There are players who can thrive on average teams with no expectations, Shamet did that. Then there’s players who can thrive on a title team with championship expectations, and Shamet is also doing that.

It is time to start shining a light on Landry Shamet and how important he is to a team pursuing their first championship in franchise history.