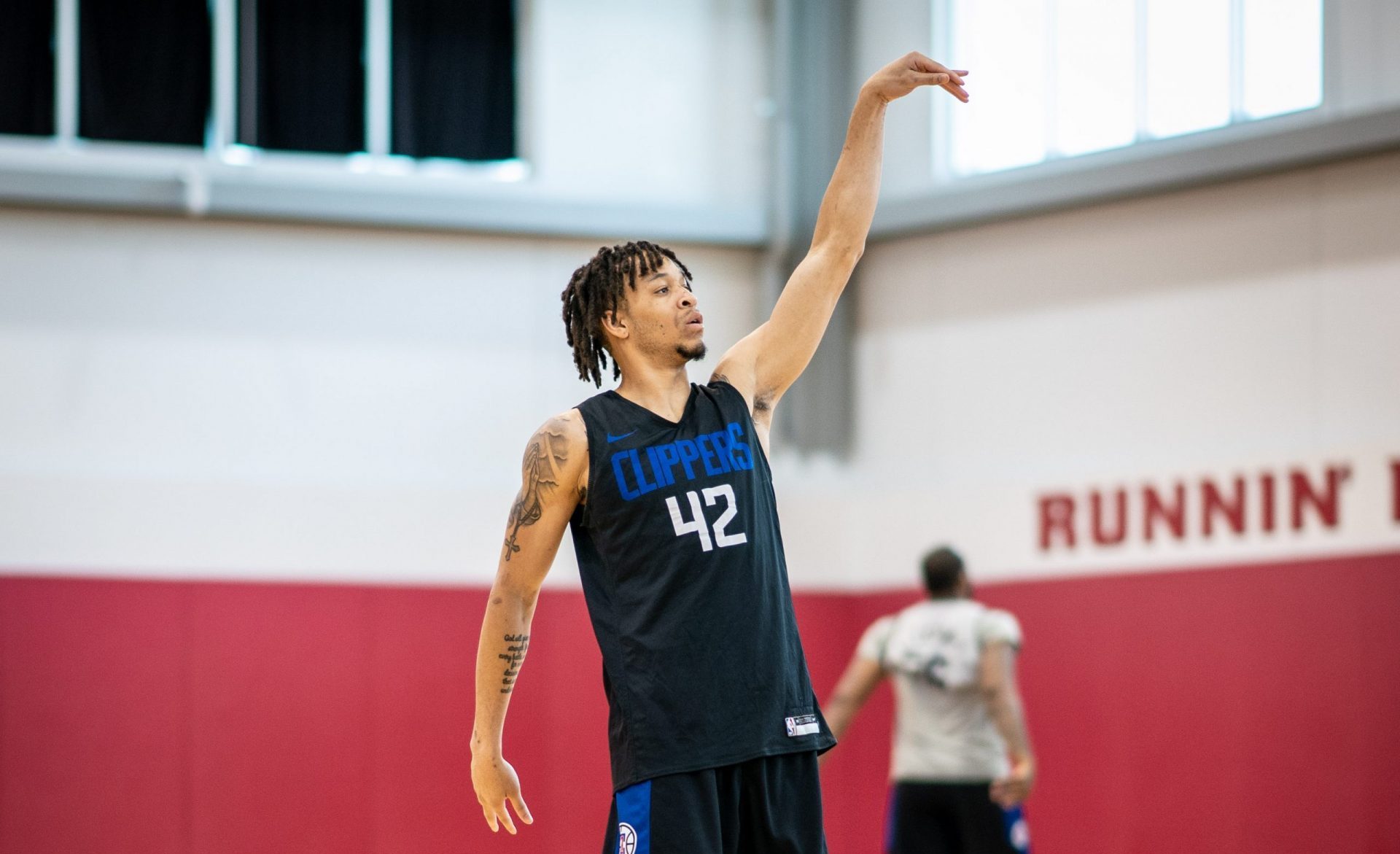 As is tradition, we’re starting our 213Hoops off-season coverage with a series of individual player breakdowns, going one-by-one through the roster to check in on how each player measured up to pre-season expectations and where their future with the Clippers might be headed. Today, we’re kicking things off at the end of the bench with Amir Coffey

As much as Clippers fans may be high on Coffey (as most fans are high on most of the younger/unknown players on the end of their team’s bench), any realistic expectation for his contribution this year should have been mild. That’s not a dig against Amir–he’s an undrafted free agent scrapping his way for garbage time minutes on a two-way contract. Before this season began, I wrote that Amir would need “adequate performances in limited minutes, either in garbage time or in extreme depth situations.”

That’s pretty much the job of any two-way contract player, who by definition are not expected to play on a nightly basis and are kept around to fill in the gaps while hopefully developing for a regular roster spot in the future. Speaking of the future, though… with Coffey entering his second season on a two-way contract with the Clippers, we did know coming into this year that it was something of a do-or-die season if Amir was to stick with the team long-term. While league rules would allow the Clippers to keep Amir on a two-way contract for a third year, it always seemed at least a little unlikely–if he had a breakout 2021 campaign, he’d be able to secure a better deal in free agency, and if he didn’t show a lot, the team would likely decline to invest a spot on him for a third year. And with the Clippers’ kind of weird roster construction this year (lots of small guards, two roster spots used on unplayable big men the team drafted, an open 15th roster spot due to the hard cap, and an injury redshirt rookie in the other two-way spot), we knew that Amir would get more chances than he did in his rookie year just by default of being a healthy 6’7″ wing.

And get those chances he did. Amir was a legitimate depth piece for the Clippers this year who Ty Lue turned to regularly in garbage time or injury replacement situations. He played 394 minutes on the year across 44 games, but it’s notable that he played in the first half just 19 times–a lot of those appearances were just a minute or two at the end of a blowout. Still, for a 14th or 15th man, being able to step in around 20 times a season and fill a role is basically all a team can ask for, and Amir did that quite well this season.

Without overstating his effectiveness, Amir does a lot of stuff that has value on an NBA court. He’s active and lengthy on the defensive end, he brings energy and pace to the lineup, he has enough ability with the ball in his hands and athleticism around the rim to make plays in transition, and he is a capable three-point shooter. The real question is how sustainably good he can be at these different things–this season, he shot 41.1% from three on 7 attempts per 100 possessions. If that held up over the course of a full 1200 minute season for typical role player, he’s probably good enough at everything else already to be playing nightly in the NBA. But you just can’t determine that he’ll sustain that based on 56 attempts this year–especially when he shot 32% on his 19 attempts in 2019-20, 30% on 135 attempts as a senior in college, and 30% on 67 attempts in the NBA G-League’s 2021 bubble. It remains to be seen if his shooting this year was because he’s taking easier, open corner threes as the 5th option against NBA defenses, or if it was just a fluke.

But where Amir’s shooting in this year’s sample of NBA minutes may have been a bit of a lucky outlier, it was certainly impactful: in one of the best Clipper games of the season, Amir played 32 minutes and shot 5-6 from three as an extremely shorthanded lineup defeated the Miami Heat. It’s really hard to quantify whether Amir was an “adequate fill-in” other than saying that he looked the part, but here’s an honest attempt: if we just look at Amir’s first half minutes this season (excluding potential garbage time to find a sample of only meaningful minutes), the team won his 133 minutes by 2 points. Now, the Clippers normally won by 6.2 points per 48 minutes, so +2 in 133 underperforms the team average by quite a bit–but it also means that the Clippers could more or less safely roll out lineups featuring Amir without worrying about consistently having any of his weaknesses exploited to concede runs. At a deep bench level, that’s a win.

It seems to me that Amir has pretty squarely shown that he’s a viable NBA depth piece who belongs on someone’s 15-man roster. But, it feels like there’s a relatively low upside beyond that–he’s 24, not 19, and likely regression to average (or below-average) three-point shooting plus a lack of ability consistently create efficient half-court offense limits his ability to be a high-impact rotation player unless he becomes an All-Defense-type guy–and while he’s fine on that end, he’s not Tony Allen.

All that means is that while you’d be perfectly happy to keep Amir around for depth, he’s not a can’t-miss developmental player because he’s already 24 and therefore less likely (though it’s not a 0% chance) to break out in a major way in the coming years. In my opinion, his status on the roster probably has more to do with other guys than him. We’ll discuss the roster spot crunch plenty over the next six weeks or so, but the Amir question might depend on the sum of the following questions: does Patrick Patterson’s relationships on the team warrant another one-year deal? Can the team hold on to free agents like Kawhi Leonard, Reggie Jackson, and Nicolas Batum? Do they trade the expiring contracts of veterans like Patrick Beverley and Rajon Rondo? Do they intend on rostering their first-round pick (as opposed to a trade or draft-and-stash)? Do they intend on buying a second rounder to add another prospect into the fold? Is DeMarcus Cousins coming back on a guaranteed deal? Is Jay Scrubb staying on his two-way or moving onto the 15-man?

Overall, as long as there’s space for him, I’d be fully happy to have Amir back next season in essentially the same role, but on the official roster, and not just because of the Coffey puns. He’s fully capable of being that emergency third string wing, and he seems to have built up goodwill in the organization after they first saw him in summer league two years ago. If the team doesn’t put him on the 15-man roster, I worry that another team will… but if that doesn’t materialize, I think you probable get more value from using a two-way spot on a third year of Amir than taking a shot in the dark at a new player.