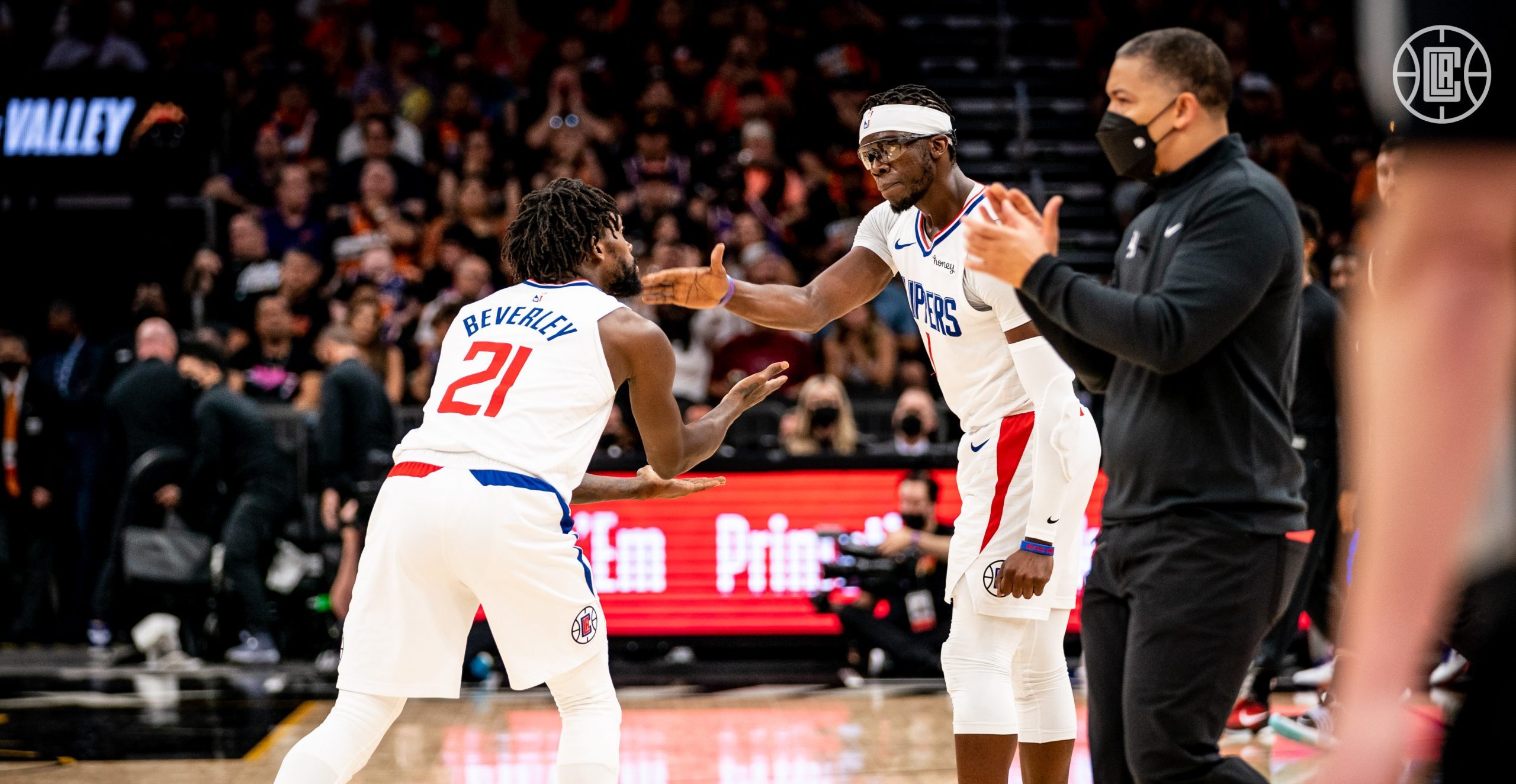 With the Clippers season over, we’re going player-by-player breaking down the season each Clipper had, reviewing our pre-season expectations for them, and considering their future with the team going forward. As we look at the team’s guards this week, we’re kicking things off with perhaps the season’s most notable storyline: Reggie Jackson.

Contract Status: Finishing his second season in LA on a minimum contract, which gives the Clippers his early bird rights. These rights allow the team to offer him a contract starting at 105% of the league average salary in 2021 (projected to be $10M) and running for 4 years with 8% raises–making for a maximum total of 4 years and $47 million (give or take depending on where the actual league average comes in compared to the projection).

When the Clippers originally signed Reggie Jackson off of the buyout market during the 2020 NBA season, there was some mild optimism about what he could bring to the table: a legitimately proven NBA point guard with over 300 career starts at the position, he brought far more viability at the position than your typical third string point guard. But as has been the case with a lot of potential point guard additions discussed in recent years, it had to be noted that just because the Patrick Beverley/Lou Williams duo was flawed didn’t inherently mean that other players in the Clippers’ price range weren’t also flawed in their own ways (think Rajon Rondo). That certainly played out in the 2020 postseason, where Jackson was completely lost defensively and made dreadful decisions with the basketball, forcing Doc Rivers to bench him and start Landry Shamet at point guard instead when Beverley was injured.

Coming into the 2021 season, it’s fair to say that expectations for Jackson were even more muted. By his own admission, he considered retiring and wasn’t sure if he was going to return to the NBA. He didn’t sign with a team during the shortened free agency window last fall, and it briefly looked as though the Clippers were going to roll with Ky Bowman as their third-string point guard instead. But when Jackson decided to return, the team signed him back to another minimum-salary deal for what would presumably be a third-string role–or, as I wrote before the season began, a 2.5-string role where he’d play pretty frequently either as a fill-in shot creator on the 2nd unit or getting spot starts at point guard for Patrick Beverley, leapfrogging Lou Williams to allow the legendary 6th man to remain in his off-the-bench role.

But I have to admit, there was not very much excitement when it came to the prospect of another season of the Reggie Jackson experiment. I did admit that I thought Jackson would help the team win a few more games than Bowman would have, but I meant regular season games, not playoff games. And most of all, Jackson was not a fun player to watch in the bubble, often out of control and generally unable to keep up with the elevated level of play in the playoffs. As I said, I admitted that keeping Jackson over Bowman was the right move–but a big part of me was ready to move on to a new, younger depth guard and spare us all more of what Reggie showed in the bubble.

Reggie’s season began a bit unevenly, as his poor decision-making from the bubble reared its head early and saw him pulled quickly from the team’s opening night game against the LA Lakers. As his play stabilized in the early weeks of the year, his fit on the second unit with Lou Williams and Luke Kennard was clearly disastrous, and his warts continued to show just enough that it made sense to remove him from the rotation entirely. His role fluctuated until Patrick Beverley fell out of the lineup with an injury, at which point Jackson predictably began starting–and his level of play began to rise. Between Beverley’s injuries costing him 45 games and keeping him restricted to around 20 minutes a night for many of the contests he did feature in, and Paul George missing a stretch of games in February with a toe edema issue, Reggie was able to grow comfortably into consistently starting.

As he grew into his role, his level of play rose dramatically. Ty Lue suggested that continued recovery from injuries might have contributed to his progression, while Jackson himself credited the organization with “empowering” him. But you stopped feeling anxious when he was on the floor. He had fewer WTF moments, and he was good enough in a large enough quantity that you could accept some inevitable errors.

Still, heading into the playoffs, the feeling was that Patrick Beverley would regain his starting point guard spot, and with newcomer Rajon Rondo essentially guaranteed to get consistent playoff minutes, any role for Jackson would be much smaller and highly competitive with Terance Mann and Luke Kennard also vying for opportunities. But with Beverley ineffective against Dallas as a defensive specialist without a matchup, Lue made the choice to insert Jackson into the starting lineup in game 3, and while the results on paper weren’t exceptional, it was the start of a truly exceptional playoff run for Reggie. He had 16 points on 6-12 shooting in 33 minutes, which is a good game but nothing groundbreaking. But he’d go on to start the team’s final 17 playoff games, averaging 18.9 points on 49.6/42.0/87.2 splits during that span. Before Kawhi Leonard left the lineup with a right knee sprain during the second round, Jackson was crucial as a high-volume, high-efficienty three-point outlet to relieve pressure. In the 9 playoff games Reggie started alongside Kawhi this year, he shot 47% from three on 7.3 attempts per game. Then, with Kawhi sidelined, Reggie became the team’s second option on offense, burdened with a heavier creation load. Through the final 8 playoff games, he averaged 21.2 points and 4.4 assists, still shooting 48.5% from the field on increased volume even as his three-point shooting cooled off to 36.9%.

It was almost certainly the most exceptional hot playoff run by a role player in recent Clippers history, and maybe one of the most notable ones ever when you consider that just 16 months prior, in February 2020, Jackson was bought out of his contract by the Detroit Pistons, paid by his former team to go away and play his basketball somewhere else. In 2021, he was nicknamed “Mr. June” on national television en route to 9 20-point playoff games–tied for 10th in the NBA this season and likely to hold that spot unless either Jrue Holiday or DeAndre Ayton, each currently with 6, have 4 such games in the NBA Finals. As significant as Terance Mann’s development and breakout year for the Clippers was, and as iconic as Mann’s 39-point closeout performance against the Utah Jazz will remain in Clipper lore, I can say pretty confidently (without taking anything away from Terance) that Reggie was the biggest surprise breakthrough player on this iteration of the Clippers.

The real question with Reggie is one of sustainability. At this point, I don’t have a ton of questions left about his shot, despite him being a lackluster shooter for much of his career. Even as a Clipper, he’s shot the ball substantially better on catch-and-shoot attempts than off the dribble, and it’s not surprising that he gets a much higher share of his attempts that way playing off of Paul George and Kawhi Leonard. The comfort level he has in taking high volumes of them is apparent (only Steph Curry, Klay Thompson, and Reggie Jackson have made 3 or more threes in a playoff run as often as Reggie did this year). He’s now made 43% of over 500 regular season and playoff three-point attempts as a Clipper in the last 16 months. That’s stable.

But some of the other stuff we saw in this playoff run? Not so much. Think about the acrobatic finishes in transition, the courageous drives directly into Rudy Gobert’s teeth, the assortment of floaters and runners and pull-up jumpers, some of which were tightly contested. Jackson made 51% of his shots within 10 feet this season. He made 60% in the playoffs. He hasn’t shot better than 48% on his two-point shots since he was a backup in Oklahoma City early in his career. This season, he hit 46.5%. In the playoffs, he hit 58.2%. Those numbers are going to come back down to earth.

And so you’re left, whether you’re the Clippers or another potential suitor in free agency, wondering how to appropriately determine the price point for a guy like Reggie Jackson, who just had the best month of his life at 31 years old. For teams who are still looking to build their core–the type of team that tends to have cap space to throw at free agents–there has to be serious, serious reservations about signing a 31-year-old with an injury history based on one month of outlier efficiency offense. Established teams with playoff cores might be more likely to have a similar role for Reggie to slot into, but are less likely to have more money than the mid-level exception to offer to a veteran free agent. If an offer is coming from a team that is willing to invest $15 or $20 million dollars a year into Reggie Jackson, it’s hard for me to figure out where it’ll come from.

The Clippers, for their part, can offer Reggie a contract that will be worth approximately $47 million over 4 years. If other teams don’t want to go beyond the mid-level exception, that Clippers offer represents a nice bump against competing offers–and then there’s the fact that Jackson seems to really have found a home with the Clippers organization, playing alongside one of his best friends in Paul George. It only makes sense that he’d want to stay with the Clippers on a contender and need a big money offer to lure him away, as opposed to potentially looking to jump ship.

Then, the Clippers have take a look in the mirror and ask themselves, assuming Kawhi Leonard also re-signs this summer, how willing they are to tether the next four seasons of George and Leonard to Reggie Jackson, including $13M for him in 2025 when he’s 35 years old. It would definitely be preferable to keep the deal slightly shorter–even a 3-year, $34 million contract significantly lowers the long-term downside by giving the Clippers an additional year of flexibility and making him more tradeable.