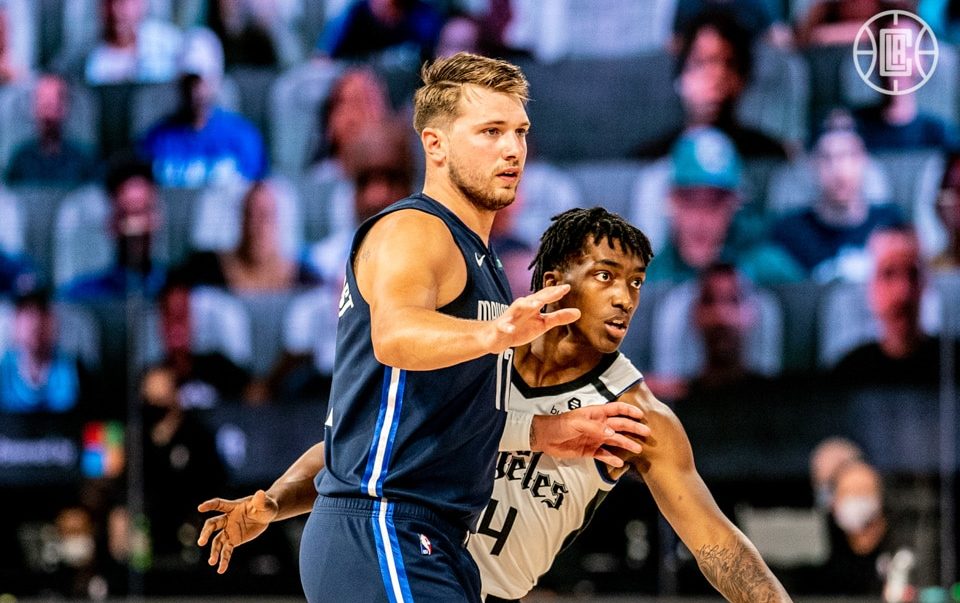 Now that the Clippers’ 2020 season has reached its disappointing end, 213Hoops will work through the roster player-by-player for our “Exit Interview” series. Today’s exit interview features rookie Terance Mann.

Started in all 20 of his G-League appearances with the Agua Caliente Clippers of Ontario, playing 35 minutes per game and averaging 15.4 points, 8.8 rebounds, 5.7 assists, and shooting 53.5% from the field and 32.7% from three.

Contract Status: After drafting Mann with the 48th overall pick last season, the Clippers signed him to a four-year minimum contract. His $1.5 million salary for 2020-21 is guaranteed, while his $1.8M and $1.9M for the final two years are not.

Realistically, we should never, ever have expectations for non-lottery rookies–especially for a player like Mann, who was picked 48th overall and then immediately asked to move from playing on the wing in college to point guard in the NBA. But, naturally, folks get their hopes up, and that was only exacerbated when Jerry West talked the rookie up before the season began.

In terms of strengths and weaknesses, Mann was expected to be a smart and versatile player offensively and a big, active point of attack defender at 6’5″. A crafty distributor from the wing in college, we knew he was going to struggle in his first year trying to run an NBA offense, and individually we anticipated that he would struggle to be a true creator or scorer unless his shot came along significantly.

In terms of role on the team, there shouldn’t have been much expectation that Mann would get rotation minutes with established veterans Lou Williams, Landry Shamet, and Rodney McGruder ahead of him on the perimeter for the second unit. Offensively, everyone knew he would need time to learn a new position at the professional level, and on the other end, almost every rookie guard struggles to defend at first in the NBA.

If we accept that the expectation for Mann, as the 48th overall pick in his rookie year learning a new position, was nothing, then the reality of him as a rookie was pretty good! But for folks who were hoping that he would break into the guard rotation by the end of the season, seeing Mann relegated to emergency depth duties was likely a bit of a disappointment.

Overall, I thought he had a good year, though. Offensively, he was inconsistent as the Clippers cycled through emergency point guards in an attempt to find quality depth behind Patrick Beverley–Derrick Walton Jr., Jerome Robinson, Landry Shamet, Mann, and finally Reggie Jackson. Over the course of six spot starts from November to January, it was clear that Mann wasn’t quite trustworthy in that role at this early stage in his career, and as a result he stayed anchored to the bench as Jackson and Shamet filled in for the injured Beverley in the first round against Dallas.

But as unreliable as Mann was on offense, he showed flashes of being a dynamic playmaker that is encouraging in terms of his long-term development, most notably closing the season with a 25-point, 14-rebound, 9-assist performance against the Oklahoma City Thunder and posting 13 points, 8 assists, and 6 rebounds in a start over the Atlanta Hawks last November, nearly a year ago. But both of those games become a little less meaningful when held up to scrutiny: against OKC, both teams played third-stringers as they rested in the season finale to prepare for the playoffs, and against Atlanta, the Clippers jumped out to a double-digit first quarter lead behind a red-hot start and ended up coasting to a 49-point win, 150-101. So, while you’d rather your prospects play well in garbage minutes than struggle, Mann’s best offensive performances came in some of the lowest-intensity settings you’ll ever see in an NBA season.

In more normal situations, he was often invisible offensively, not providing meaningful on-ball creation or off-ball spacing from a position where NBA players are expected to provide both. His season numbers look respectable largely because Rivers minimized Mann’s usage in meaningful situations, saving him from being overly exposed. In our pre-bubble check-ins, Rob Flom wrote that Mann was routinely hesitant and non-impactful when given rotation minutes.

On the other end, however, Mann was the rare guard who managed to be a plus defender during his rookie campaign. His energy, size, and IQ all yielded defensive production far more quickly than you would expect on a reasonable development timeline, and while his overall limitations kept him out of the playoff rotation, he actually earned Doc Rivers’ trust as a situational defender. I never would have guessed that Terance Mann would appear in every single Clippers playoff game, but he saw at least a few seconds of action in all 13, often just to provide a possession of defense at the end of a quarter. It might not seem like much, but I think it’s significant that Rivers trusted Mann more as a single-possession defensive sub than Rodney McGruder, a four-year veteran with over 100 NBA starts who is known as a gritty perimeter defender.

Mann’s immediate future with the Clippers is safe–the team believed in him enough after drafting him that they gave him the aforementioned four-year deal with two guaranteed seasons, and clearly the franchise made the decision to be patient with his development as they asked a 23-year-old rookie to transition to point guard as he transitioned into the NBA. I’d be surprised if he wasn’t on the team’s opening night roster, whenever next season begins. They have no reason to cut a cheap prospect who multiple people in the organization are high on, and he simply hasn’t shown enough to have the kind of positive trade value that would make him a likely inclusion in any move the Clippers may try to make this off-season.

Following a moderately successful rookie campaign, Mann is left in a tricky in-between space on a contender’s roster: the next step for him to grow his career is to play regular rotation minutes, but he hasn’t shown enough for a good team to be comfortable having him as a top-10 rotation guy headed into the season. That is especially true for the Clippers, whose primary point guard is the injury- and foul-prone Patrick Beverley–they need more reliable veteran depth, which likely relegates Mann to the third string again.

If he can take sufficient steps forward, though, Mann will get his chances to break into the rotation. NBA seasons are long, 82-game marathons, and multiple players in front of him in the guard rotation will miss time and allow Terance to get real opportunities in competitive NBA regular season settings. He’ll have to improve upon his performances from his rookie campaign to be impressive, and while increased comfort at the professional level should come naturally, improving his volume and efficiency from deep will be a taller task.

By earning those 11th-man type depth minutes, Mann can cement his place on the Clippers’ roster going forward and begin to make his case to the team that he is capable of being penciled into the 10-man rotation as a third-year player (even if he doesn’t prove rotation quality, he can still secure his spot on the team by demonstrating that he can be relied upon for quality depth and situational utility). But if Terance can’t emerge as a legitimate depth option in 2021, whether it be due to his own struggles when given chances or due to being overtaken by fellow prospect Amir Coffey (or a new acquisition), the team will enter the 2021 off-season seriously questioning whether they want to guarantee his salary and roster spot for 2021-22. After a low-stakes rookie campaign, this is going to be a big year for Terance.