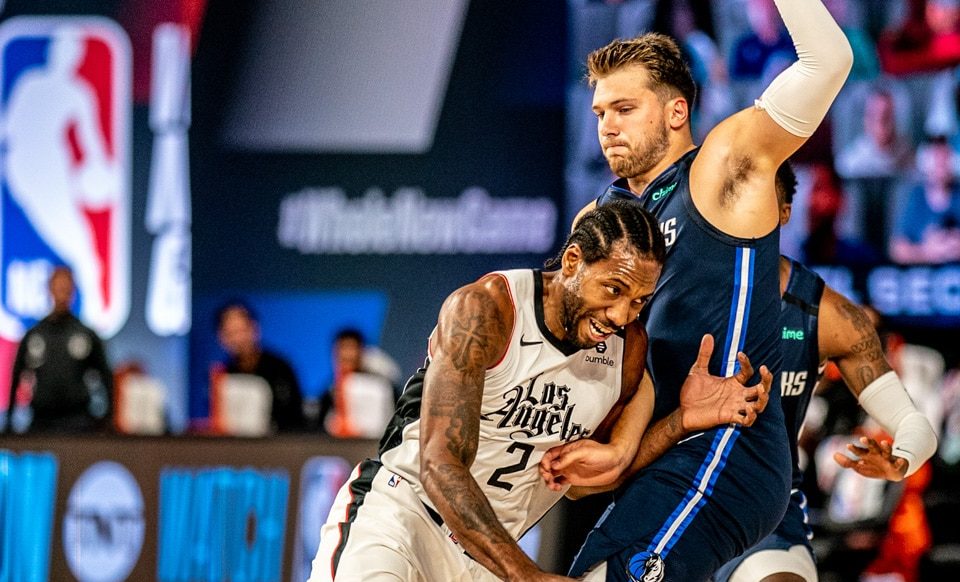 After six grueling games against the Mavericks, the Los Angeles Clippers have advanced to the second round of the 2020 NBA playoffs. The Mavs gave them a stern test, and despite being underdogs, Rick Carlisle’s team should be proud of their performance. After losing game four, the Clippers’ backs were against the wall with the series tied 2-2. The pressure was on them, and rightly so given the expectations that were set for them before the postseason started. But they rebounded back with dominant performances in games five and six to close the series four games to two. The Clippers have now had a couple of days off while Denver and Utah finish up their first-round series in a winner take all game seven. Thankfully, that has given us some time to reflect on the thrilling six games of playoff basketball we watched over the past two weeks. Here are five stats that stood out from the Clippers-Mavericks series.

31.0: Points per game average by Luka Doncic in the series

This was Luka Doncic’s first career playoff series and he surely made it a memorable one. He gave the Clippers problems in every game, as they couldn’t seem to stop him. It is possible to argue he was the best player in the series, producing some truly golden moments in each contest. He made his impact known from the get-go with 42 points in game one, scoring almost at will. Then he somehow topped that performance with a buzzer-beater in game four to go along with a triple-double (43 points, 13 assists, 17 rebounds). As the stalwart of the best offense in the NBA during the regular season, Doncic was able to get to any spot he wanted on the court. Early on, a clear issue revealed itself: without Patrick Beverley, they were missing a stalwart defensive guard who could hold his own against him, making their switch-heavy defensive strategy a nightmare.

Doncic waited out possessions until the right matchup arrived in front of him and then went to work. The Clippers made adjustments, but Doncic still kept cooking. In the end, LA was able to keep up their scoring output and did their best to limit the secondary players on Dallas from having great games. Doncic is already a star in the NBA and is going to be tough for defenses to handle for hopefully a long time. The Clippers got a first-hand look at how dangerous he can be in the playoffs.

With Paul George experiencing some rough games offensively during the series, Kawhi Leonard had to rely on other teammates to be there to provide some scoring. The Dallas defense was locked in on stopping him, which created opportunities for others. Hitting open shots went a long way in making sure the Clippers were still chugging along offensively. Lou Williams stepped up by shooting 50 percent from the field but struggled from three, shooting just 33 percent. There needed to be someone who would be there to knock down threes, especially those kick-out opportunities which appear when defenses collapsed on Leonard. In this series, that role was filled by the likes of Reggie Jackson, Marcus Morris, and Shamet.

They stepped up in their shooting from beyond the arc, knocking down a combined 46 of 78 three-pointers. Jackson, after struggling earlier on in the series, was huge in the final two games. He knocked down seven of his 11 long-range attempts and provided a huge spark off the bench. Some of his makes during game six were the ones that put the game firmly out of the Mavericks reach. It was a big boost for LA to get shots like these from their role players, especially when two of their top three scorers weren’t shooting so great. The hope is that they keep up the shot-making even when PG and Williams return to form shooting wise. The more options the Clippers can surround Kawhi with on the court, the better it will be for LA moving forward. There are going to be times where taking a shot for him isn’t the best decision and he will have to kick it out. The rest of the Clippers have to be ready for those moments.

1.42: Points per possession for Kawhi Leonard when he was the pick and roll ball handler

The best player by a large margin in this series (despite my earlier posit that you could at least argue Luka) was no doubt Kawhi Leonard. He led all players in the series in points (32.8) and rebounds per game (10.2) and was locked in from the start. When LA needed him the most, Leonard was there for a bucket. In typical Kawhi fashion, he dominated in the mid-range, but also took advantage of the matchups presented to him through the pick and roll. He would find himself being guarded by either a Mavericks big or a smaller guard after a defensive switch, and then try to break them down off the dribble. There aren’t many players better than Leonard at getting to their sweet spots and shooting pull-up jumpers.

The Clippers put Leonard in PNR situations on an average of 7.5 possessions per game, highest of any player, and he produced, generating 1.42 points per possession on pick and rolls as a ball handler. That was good enough for the second-highest of any Clipper who averaged more than five of those possessions per game. He also was extremely efficient in these scenarios, shooting an eFG percentage of 65.2. A majority of the Clippers’ success relies on Leonard being able to operate one on one in space. Running defenders through numerous pick and rolls helps open up opportunities for Leonard to either shoot, drive and draw a foul, or pass it to a teammate who is in a better position. He was in peak form against the Mavericks and he showed once again he is one of the better postseason producers in the NBA.

While Leonard lit up the Mavericks, his co-star didn’t have the same success on offense. George ended up scoring the second-highest total points among the Clippers, but it was a series full of highs and lows for the superstar. He started out strong with a 27 point performance in game one but then his shot started to falter on him. Jumpers which he would normally make started bouncing off the rim, as he went a combined ten of 47 in the next three games. George did rebound well and his defense was still at its usual best of being a great defender but the offense was a major concern. He failed to crack over 15 points in that stretch and even scored just a mere nine points in the game four loss.

However, when the Clippers faced that crucial game five, George rose to the occasion and delivered. He dropped 35 points on 12 of 18 shooting while being a +23 as well. He didn’t play so well in the closeout game with just 15 points, with the poor shooting again being the cause (six of 19). As with the point above about Leonard, the Clippers need George firing on all cylinders as they look for a potential second-round clash. They can’t have him going ice cold again for a second straight series. He’s supposed to be there when Leonard takes a rest or takes a possession off. George is giving it his all on defense and there should be no qualms about him on that end of the court. But offensively he needs to get back to the George we saw during the regular season.

81.2:  Free throw percentage by the Clippers in the series

As noted before, the Clippers are the best team in the NBA at getting to the free-throw line. They have numerous guys who are adept at drawing contact and not afraid to get hit when trying to score into the lane. The advantage at the charity stripe was evident at the conclusion of the series, with Clips having 19 more free throw makes than Dallas while also having six more attempts. Once again, it was the trio of Leonard, Williams, and Montrezl Harrell who led the way in getting to the line. Both Harrell and Williams had 27 and 24 attempts respectively while Leonard was the clear leader of the team with 55 (hitting 47 of them). LA had five guys with over 20 total free throw attempts throughout the series while the Mavs only had two in Doncic and Kristaps Porzingis.

Not only that, but the Clippers consistently hit their free throws at a high percentage. Even Ivica Zubac, who has a career FT percentage of 75.5, went 17 of 20 from the line. It was an all-around team effort for the Clippers when it came to earning free points. This is part of LA’s offensive DNA: get defenders off guard, and force them into committing silly points, then cash in at the free-throw line. It has to be something which keeps going during the second round.