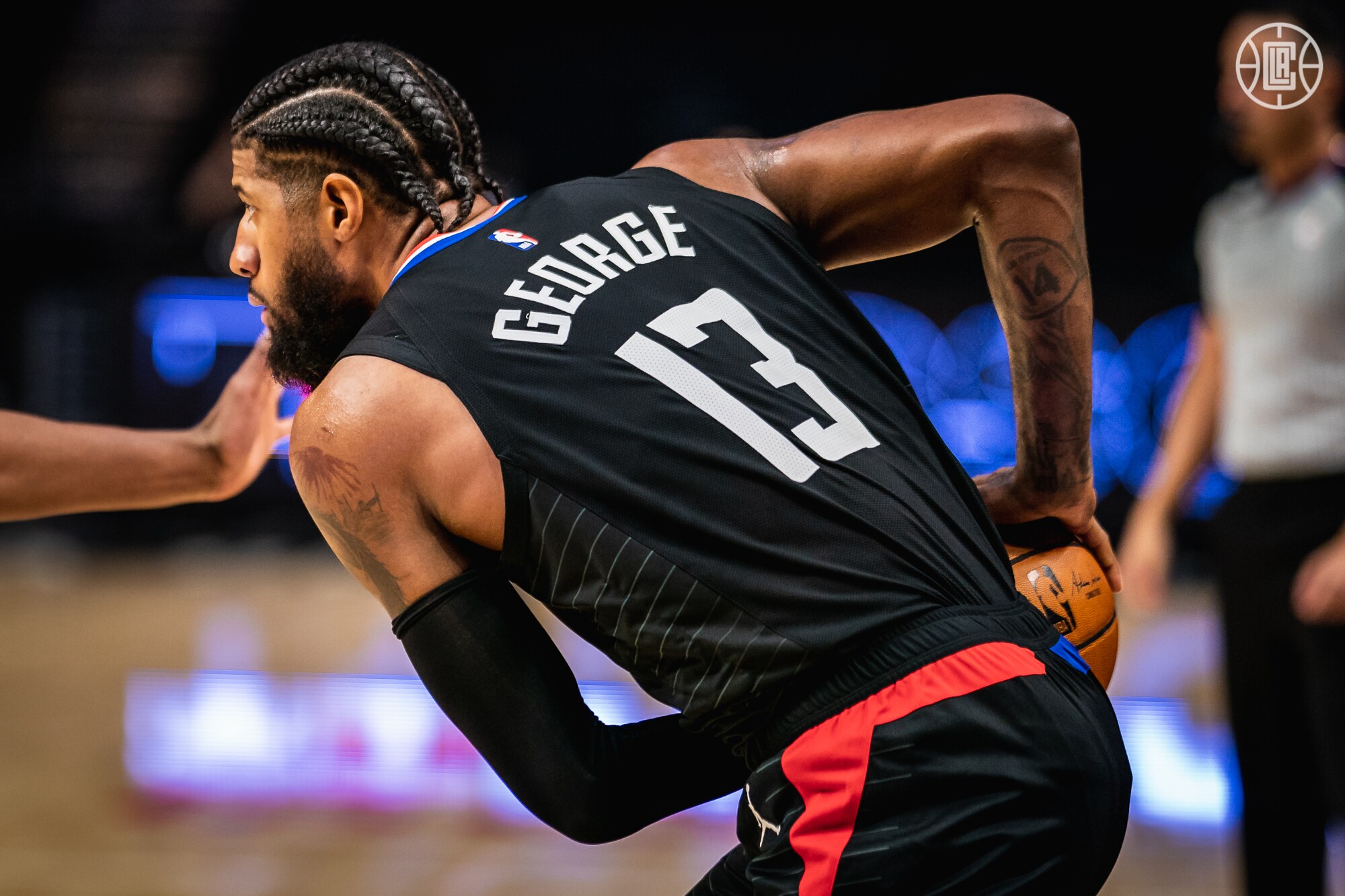 Our player roundtable series on the Clippers’ 2022 season continues with a look at star wing Paul George.

I initially wanted to give George an average grade, but it’s impossible not to think of his season without thinking of injury. He started off fantastically, hurt his elbow, his shooting fell off and then his games played fell off. We will all wonder not only about what a healthy Clippers’ team would have looked like this year, but even just a consistently healthy Paul George this year.

Giving PG a trade for this season is tricky.  I had hoped that this could be an MVP ballot-level year for him, much like the 2019 season, as the solo star without Kawhi.  Ultimately, he only played 31 games and fell short of any accolades.  I’m not holding his injury against him, but at the end of the day I can’t give him credit for what could have been in games he didn’t play.  In the games he did play, he was good but not great–even if he played 82 games this season, he wouldn’t have been in the MVP conversation (though he would have been an All-Star and snagged a spot on the All-NBA 3rd Team).  His shooting efficiency took a huge step backwards and with his increased playmaking role, his turnovers went up more from last season than his assists.  The Clippers dropped a lot of winnable games early in the season when he was healthy–games that would have really helped give them breathing room as they struggled to stay afloat without him.  All in all, not a bad year for PG, and I have no concerns about him going forward, but not a particularly good one either.

I said most of my thoughts in the Exit Interview I wrote for Paul George yesterday. For my grade, I don’t use a curve, and I adjust expectations for each player. A “C” is not a fail, or even a massive disappointment – it’s squarely meeting expectations. Paul George was supposed to be an All-Star, All-NBA level player this year who would lead the Clippers to the playoffs. Instead, he missed most of the season, his offensive numbers slipped, and the Clippers lost in the play-in. It’s hard to hold injuries against anyone, but Paul George, even when healthy, wasn’t quite as good as the Clippers would have wanted. If Paul George had played 80 games in the 2022 season and given the Clippers nearly 3,000 minutes, being an All-Star level guy and fringe All-NBA player would have been fine considering the weight of the team he’d be carrying. But without that, it’s hard to give him much more than a bare pass.

I personally don’t like to knock players much for their injury woes considering it’s out of their hands, and in the case of PG-13 this year, he was once again dealt some brutal luck. The guy quite literally got ruled out with Health and Safety Protocols the morning of the day the Clippers’ season ended. Going off of the 31 games in the 2022 season Paul George was able to clock in for, however, and as Rob covered in his piece, PG all-in-all had a satisfactory year. Taking a lot of long twos, as well as tying his career-worsts in turnover rate and free throw rate, George just didn’t exactly have an offensive season to write home about by his lofty standards. Ultimately, however, I’m still mesmerized and relieved that he was able to avoid major surgery and make it back from his torn UCL injury before the season closed, as well as look especially terrific defensively. When PG plays, it’s clear that despite all the struggles he might have, he’s still a one-of-one, top-15 player in basketball at minimum. As Tyronn Lue alluded to in his exit interview about this Clipper core, it’s all about health.

Injuries, and eventually Covid, killed PG’s 2021-22 season that was thought to be a continuation of the prior postseason. But even when he did play, he ran extremely hot and cold — looking like an All-NBA First Team player on some nights, and hardly All-Star quality on others. He gets a slight bump up in his grade for rehabbing and battling back from his elbow injury when he easily could have shut it down. But overall, this just wasn’t the kind of year that PG or anyone who had high expectations for him would have had in mind, even if it was out of his control.

Well, that’s it for our thoughts on the 2022 Season of Paul George. Let us know your thoughts and grades in the comments below!