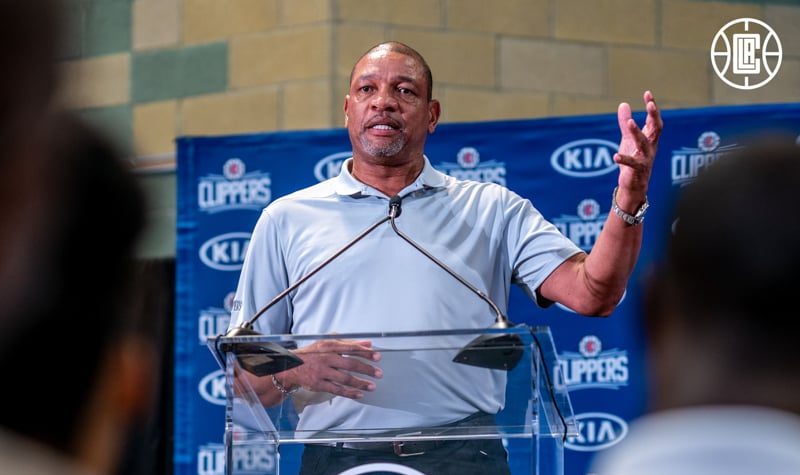 The Where Are They Now series is back for another look at an unheralded Clippers player of yore, this time forward Branden Dawson.

In many ways, Branden Dawson was an unfortunate failure of the Clippers’ lack of player development under their previous regime (and NBA rules before two-way contract). Traded for by the Clippers with cash considerations in 2015 as the 56th pick in the draft, Dawson spent most of his first professional season adrift. The Clippers didn’t have their own D-League team, so Dawson spent time on no less than three affiliates: the Bakersfield Jam, Grand Rapids Drive, and Erie Bayhawks (two of which have moved and all three of which have changed names since). On the rare occasions Dawson was with the Clippers, he rode the bench, appearing in just six games, all garbage time.  After just a year, Dawson was waived, despite his lack of playing time and second cheap contract year. It’s hard not to think he never even had much of a chance.

Dawson signed with the Orlando Magic to a training camp deal in September, but was waived after two preseason games. He then was signed by the Magic’s affiliate, the Bayhawks. Dawson had a decent season for the Bayhawks, appearing in 33 games (starting 13) and averaging 12.9 points, 7.1 rebounds, 1.6 assists, 1.7 steals, and 0.6 blocks per game. As always with Dawson, the rebounding and defensive stats were there in a big way, but the offense (medium scoring on pitiful 50.3% TS) was not. The Bayhawks waived Dawson at the end of March – a decent D-League player, Dawson, already 24, did not appear close to NBA ready.

Within two days, Dawson had signed with Hapoel Tel Aviv of the Israeli Premier League, the top league in Israel and one of the better domestic leagues outside of the US. Dawson closed the season with Hapoel, appearing in eight contests and averaging 8 points and 4.6 rebounds per game. Unfortunately, his efficiency remained poor, with a field goal% of 48.2 but only 45% from the line and 12.5% from three, all on very limited attempts.

In August, Dawson signed with the Hitachi Sun Rockers Shibuya of the Japanese B. League. However, he only played in 10 games for them, averaging a mere 6.6 points, 2.9 rebounds, and 0.9 blocks across 12.2 minutes. On a per-minute basis those stats are actually pretty good, but there must have been a reason Dawson didn’t play more. Whether he left because of lack of playing time, personal reasons, or injury does not seem clear, but whatever it was, this season of basketball was sparse and not particularly successful.

The 2019 season was Branden Dawson’s most prolific to date. He got a late start of it, only signing in December to Soles des Mexicali in the LNBP, the top division of Mexican basketball. He started 19 of the 21 games he played in, and averaged a robust 14.2 points, 7.9 rebounds, 2.9 assists, 1.6 steals, and 1.6 blocks. At some point, however, he moved to another team, Gigantes del Jalisco, and played another 21 games with them, helping them to the second spot in their division. Dawson’s numbers were a tick under where they were for Soles, but that was due to his playing fewer minutes per game. After the Mexicn season was over, not done, Branden signed to Mauricio Baez of the TBS League in the Dominican Republic. He played four games for Baez, and averaged a staggering 13.8 points, 15.5 rebounds, and 2.3 blocks per game at a clearly lower level of play. Still, overall, it was a successful season for Branden.

Unfortunately, 2019 got off to a bad start when Dawson wasn’t eligible to play for the Philippines-based Alaska Aces, due to, incredibly, his being over 6’5, which is the limit for foreign players in that league.

Dawson didn’t sign anywhere for quite a while afterwards, receiving an offer only in late November, and as a two-month injury replacement for an American player, Jakim Donaldson, for Bnei Herzliya of the Israeli National League, the second tier in Israel. Dawson played in a mere two games for them before getting waived. This was the only team he’d play for in the 2020 season. This year is particularly interesting since it was coming off perhaps his best year as a pro in Mexico – maybe there were bad personality reports, or some sort of injury scared teams off. Regardless, a tough blow for Branden after a good year prior.

Dawson’s rough 2020, or maybe the factors that led to it, caused him to have just as poor a start to his 2021 campaign. He signed in November to Kaohsiung Jeoutai Technology of the Taiwan Super Basketball League. If you’ve never heard of it, there’s a good reason why, as it was a semi-professional league. In 2021, the league split, with some teams joining the new professional T1 League. At that point, Dawson was signed to the Hsinchu JKO Lioneers of the P+ League in Taiwan, with whom he finished the season.

The Lioneers brought Branden Dawson back for the 2022 season, but whether due to COVID, other factors, or just league size (there are only six teams), Dawson played in a mere seven games. He averaged 14.4 points and 8.7 rebounds – good numbers, to be sure, but not a ton considering the level at which he was playing at. Dawson, always a defense-first player, never seems to have developed his offensive game enough to be the kind of American player who dominates overseas.

At 29 years old and playing in well below top-tier international leagues, Dawson’s chances at returning to the NBA are probably about zero. The Clippers never gave him much a shot, but his career since suggests he’s not an NBA player, or probably even close. Still, he’s been able to find a home most years (though it doesn’t seem as if he’s signed anywhere yet), and that counts for something. As he ages into his 30s, those spots might run out, but until then, Branden Dawson will presumably keep chugging along.