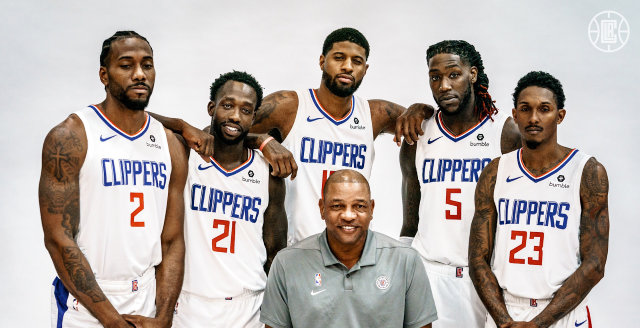 The Clippers’ Failure Was Rooted in their Lack of Focus

Coming into the season, the Clippers already had their identity from the 2019 campaign: a bunch of guys who were gritty, underlooked, and had to “get it out the mud.” The arrival of two superstars (Kawhi Leonard and Paul George) were key to the potential on-court success of the team, but their identities and personalities were a bit different. They were relatively quiet and to themselves. They wouldn’t be entering the Clippers locker room as the vocal leaders. The three remaining players from the 2017 Houston Rockets trade (Pat Beverley, Lou Williams, and Montrezl Harrell) came into this season as the longest tenured Clippers and the leaders of the team; their voices would hold the most weight. At large, the Clippers would become a representation of these personalities, which would end up being part of their failure. There just wasn’t much unified leadership.

Lou Williams was excused from the NBA bubble during July in order to deal with a family matter. While every other non-excused NBA player was forced to remain in the bubble and stay isolated from friends and family, a photo surfaced online of Lou Williams alongside rapper Jack Harlow inside of an establishment called Magic City, an Atlanta strip club. No matter how Lou tried to paint his picture of the situation, it didn’t sit well with the world, and certainly didn’t sit well with the NBA. Lou was summoned to seven days of additional quarantine upon his return to the bubble, causing him to miss seeding games and miss opportunities to form more continuity with the rest of the team.

Similar to Lou, Trez too missed a lot of time in the bubble as he was excused to be with his late grandmother during her final days. He returned just in time for the playoffs. As the playoffs got rolling, Trez found himself at the center of controversy. People were upset and were calling for the NBA to take action against Trez, who was caught having a racially-controversial exchange with Dallas Mavericks star player Luka Doncic. As he was already struggling on the court to regain form, this added attention certainly didn’t help the situation.

Outside of this fanbase, perhaps no Clipper is disliked more than our very own Patrick Beverley. His on-court tenacity and ability to be a gritty, get-under-the-skin kind of competitor has always rubbed people the wrong way, but we all know how important that type of presence is to any team that is serious about winning. However, the focus rapidly began to shift away from the basketball court as the season returned. The most noteworthy situation occurred at a players meeting in the Orlando bubble, as players met with NBA representatives to discuss the future of their season after more racial injustices in the world had left them stuck on how to use their platform. In that meeting, Chris Haynes of Yahoo! Sports reported that NBA players called out Pat for his multiple counts of disrespect towards NBAPA Executive Director Michele Roberts, claiming that Pat said, “I pay your salary,” amongst other things when disagreeing with Roberts as she attempted to speak on salary complications. While a fair amount of players also pushed back on this depiction of Pat, something definitely happened that upset people. Honestly, we won’t ever know what exactly was said during the meeting, but things like this are not favorable from the outside looking in.

Clippers fans can agree that this season was mostly unenjoyable despite the strong results (at least until the second round). I concur with the popular explanation for this lack of joy being that we fans aren’t used to having to cheer for a team with such high expectation and pressure. But how come Lakers and Bucks fans had so much fun? There’s something to be said about teams who go out and compete night-in and night-out throughout the majority of the 82 regular season games, and STILL find a way to translate it to the postseason.

The Clippers were pretty banged up all year and they went out of their way to be extremely cautious with health, and rightfully so. However, it sometimes caused them to lose games. What was largely overlooked throughout the season by myself and likely others, though, is just how little respect this team seemed to show to its opponents. This team rarely showed up and competed for the full 48 minutes: they got by on talent alone, and they ignored the importance of cohesiveness. At the end of the day, this was an overly-confident group who went about the process in the wrong way.

Being around basketball my whole life, I’ve always been cognizant of the code of respect. Even if the code isn’t always written, it’s common sense. The Clippers’ players were a bit disrespectful throughout the season, and karma had its way of handling the situation.

Occasion #1: Dame Lillard vs The Clippers

During the waning moments of an August seeding game between the Trailblazers and the Clippers, Damian Lillard came up short on two late free-throws and a late three-point attempt. This resulted in Patrick Beverly, Marcus Morris, and Lou Williams losing their minds in disbelief; they visibly taunted and laughed at Lillard from the bench. I didn’t have as much of a problem with it as others did; it’s basketball, trash-talk happens. But things escalated quickly after the game as the involved players went back-and-forth over social media. Pat made a “Cancun on 3” reference to Lillard after Lillard had mentioned sending Pat and Paul George home in the playoffs once before in buzzer-beating fashion. PG responded with “and you getting sent home this year.” Things took a left turn when families got involved, though eventually there was truce. Of course, now that the Clippers have bowed out in only a way that only the Clippers could do, the dramatic episode of “NBA Beef” has returned to the internet and will be here to stay until the next Clippers vs Blazers game.

Occasion #2: Clippers vs the On/Off Switch

While I hate to give Kendrick Perkins more attention than he deserves, the longer the season went on the more I couldn’t stop thinking about his tweet that read, “The Clippers only get up to play the Lakers.” As I write this today, I can’t say that Perkins’ tweet is totally true, being that he has had a public distaste for the Clippers all season long for no apparent reason, but he might not be too far off. And seeing exactly how this roster was put together, it does seem that they were gearing specifically for how to deal with the Lakers, ignoring many other NBA teams and disregarding what those teams brought to the table. Simply put, this team thought they were good enough to flip the switch when the time called for it. Sadly, they couldn’t.

My problem with the 2019-2020 Clippers team is that there was too much noise; mostly for the wrong reasons. All of the clapping-back with the media was annoying, even if it was warranted at times. While a few of these guys had moments during the playoffs, most of the players really didn’t live up to the hype surrounding them. Their attention always seemed to be everywhere but the basketball court, being distracted by the attention and criticisms that came with high expectations. In other words, this team of “Dogs” had a bunch of bark without a lot of bite. I’m going to walk away from this season as a frustrated fan, but optimistic that this humility serves as a wake-up call to the organization. With just one more season under contract for both Kawhi and PG, time is of the essence. Hopefully the 2021 Clippers come back with a different approach, and different results.