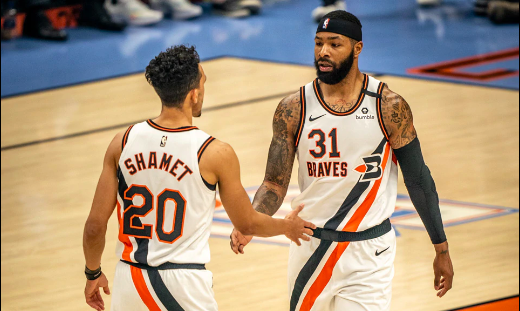 Power Rankings Watch: How Are The Clippers Faring in Week 17

What a weird weekend. First, on Friday, I ordered a White Claw at perhaps the diviest dive bar I’ve ever been in and got a very odd look from the 50+ year old Irish bartender. It was like I entered his house and pissed on his rug a la ‘The Big Lewbowski’. I don’t think I blame him. I was also on a date. The date went well. She didn’t bat an eye at the Claw. Wonder if that’s a good thing or a bad thing…

The next night I watched as the Clippers ate dirt for 48 minutes against a Minnesota Timberwolves team without new addition D’Angelo Russell. They hit 26 3’s, a franchise record, and showed just how bad the Clippers perimeter defense can be sometimes. With guys like Paul George and Kawhi Leonard at the top, there’s no way teams should shoot the way they do against LA. It happens too frequently. Granted, the lack of Moe Harkless didn’t help, as did not having Patrick Beverley. Even Marcus Morris could have helped. One of those games you forget about even before it ends and move on.

The Clippers had a chance to redeem themselves quickly with a road back-to-back against an absolute abomination of a basketball team in the Cleveland Cavaliers, who will only get worse with the addition of ball-stopping big Andre Drummond. This game was over after about five minutes of play, as Lou finally looked good in a start, PG smoked the Cavs everywhere, Zubac controlled the pace inside, and everyone contributed. Morris played decently, adding 10 points. While he was only 5-for-12 from the field, including 0-of-4 from 3, Mook was active defensively early, hit his shots in the mid-range, and spread the floor out exceptionally. We obviously have to see how he’ll fit offensively with Kawhi in the lineup, but it was a solid first showing.

The Clips have a stunted week with the All-Star break coming on Friday. However, looking ahead to this break will be dangerous for them as they face the Sixers and Celtics on the road. These are two games that might not mean a lot standings wise, but mean a lot in terms of importance for this team in terms of gelling as a unit and beating top Eastern Conference talent. The Clips already took down the Celtics in their only OT game of the season, but they always have problems with Joel Embiid’s height. Hopefully they can take care of some business and go into the break with nearly 40 wins.

Notes: “Maurice Harkless wasn’t bad for the Clippers. He shot 37% from 3-point range and ranked second on the team with 3.7 deflections per 36 minutes. But Marcus Morris is an obvious upgrade offensively, while giving the Clippers some additional size and strength on both ends of the floor. The Clippers have been about average offensively in (limited) minutes with Lou Williams, Paul George, Kawhi Leonard and Montrezl Harrell on the floor together, and Morris can make that group more potent.

The question is how much we’ll see of the Clippers at full strength and at full focus (see their 27-point loss in Minnesota on Saturday) between now and April 15. The good news in that regard is that they have only three back-to-backs left on their schedule. Patrick Beverley has missed the last two games with a groin injury, but rest time is coming and the Clippers will be the last team to start its post-break schedule (getting Thursday and Friday off next week).

They went 0-2 against the Bucks, but the Clips are 6-0 against the other five Eastern Conference teams with winning records, with two marquee matchups on TNT (Tuesday and Thursday) this week.”

Notes: “Never mind their bizarre loss to the Wolves, as the Clippers watched Minnesota drill 26 3-pointers on 44 attempts. The Clippers won the week with their deadline deal for Marcus Morris Sr. At full strength, the Clips have the most impressive top-eight rotation in the league, and Morris adds a new mismatch dimension and lineup option for Doc Rivers to explore. And the biggest win of the Morris deal for the Clips: The Lakers didn’t get him.”

Notes: “The Marcus Morris addition is pretty huge. I wrote about it during deadline day in trying to quickly assess everything it could mean for the Clippers in their quest for their first title. The more I think about Morris on this team, the more I think we’re going to see the Clippers make sure Kawhi Leonard and Paul George are rested for the playoff run. Morris helps with this far more than Maurice Harkless was able to. Morris proved during his brief New York Knicks run that he can handle the scoring load. Now, granted, those Knicks teams barely won anything, but LA isn’t asking Morris to carry the Knicks when Leonard or George sit out. They’re asking him to fill in as a defender and a secondary scorer next to the other star. Maybe he’s even still the third or fourth scoring option behind Lou Williams and Montrezl Harrell.

If you were frustrated by load or injury management before, I think the Clippers have even more freedom to do it now. That’s not a knock on Harkless either. It’s just where Morris allows them to diversify things a bit more. The Clippers probably still need another big man option. I’m not sure who becomes available in the buyout market here. The Clippers received a little good news with Darren Collison opting to stay retired. It means he won’t go to the Lakers. But the Clippers still need to figure out how to eventually get everybody on the floor and protect the rim in the process. If you’re wondering why the Clippers dropped this week, you can’t get blitzed by Minnesota when it hasn’t won a home game with its best player since Nov. 13.”

Notes: ” If Marcus Morris Sr. comes close to replicating the 43.9 percent he shot from deep with the Knicks (on a career-high 6.1 attempts per game), he’ll make the Clippers more dangerous to the select few teams who pose a threat to them in the playoffs. You can never have too many sturdy, switchable wing defenders. The Clippers just proved that by prioritizing Morris over an upgrade at center. Then again, Morris could close some games at the 5—definitely against Houston, but possibly against others.

The Clips eked out a 108-105 win against San Antonio to start the week and then shredded the Heat’s zone defense in a 128-111 win on Wednesday. That first victory got them to 35-15, the best 50-game mark in franchise history. Friday’s horrendous 142-115 loss to a Wolves team playing without D’Angelo Russell was one of the bigger upsets of the season, and it saw a checked-out Los Angeles team miscommunicate repeatedly on defense.

Confirming the theory that L.A. doesn’t get up for every opponent, the Clips are 10-3 in their last 13 games, with those losses coming against Atlanta, Sacramento and Minnesota.

Notes: “The Clippers stood as an upper-tier Finals contender before Thursday’s deadline, sporting a roster rich with depth. But their closing five still felt a body short. Marcus Morris should solve this problem. He adds another long, switchable body on the wing alongside Kawhi Leonard and Paul George, and he adds a reliable three-point stroke. Los Angeles is one of the deadline’s biggest winners.”

Notes: “The Clippers were having a great week, beating the Heat on Wednesday before acquiring Marcus Morris before the trade deadline. Then they turned around and suffered their most embarrassing loss of the season, a 27-point drubbing at the hands of a depleted Minnesota team that hadn’t won a game in a nearly a month. Luckily for the Clippers, they played Cleveland on Sunday and won by 1,000 points, even without Kawhi Leonard. Morris had 10 points and four rebounds in 22 minutes in his Clipper debut.”