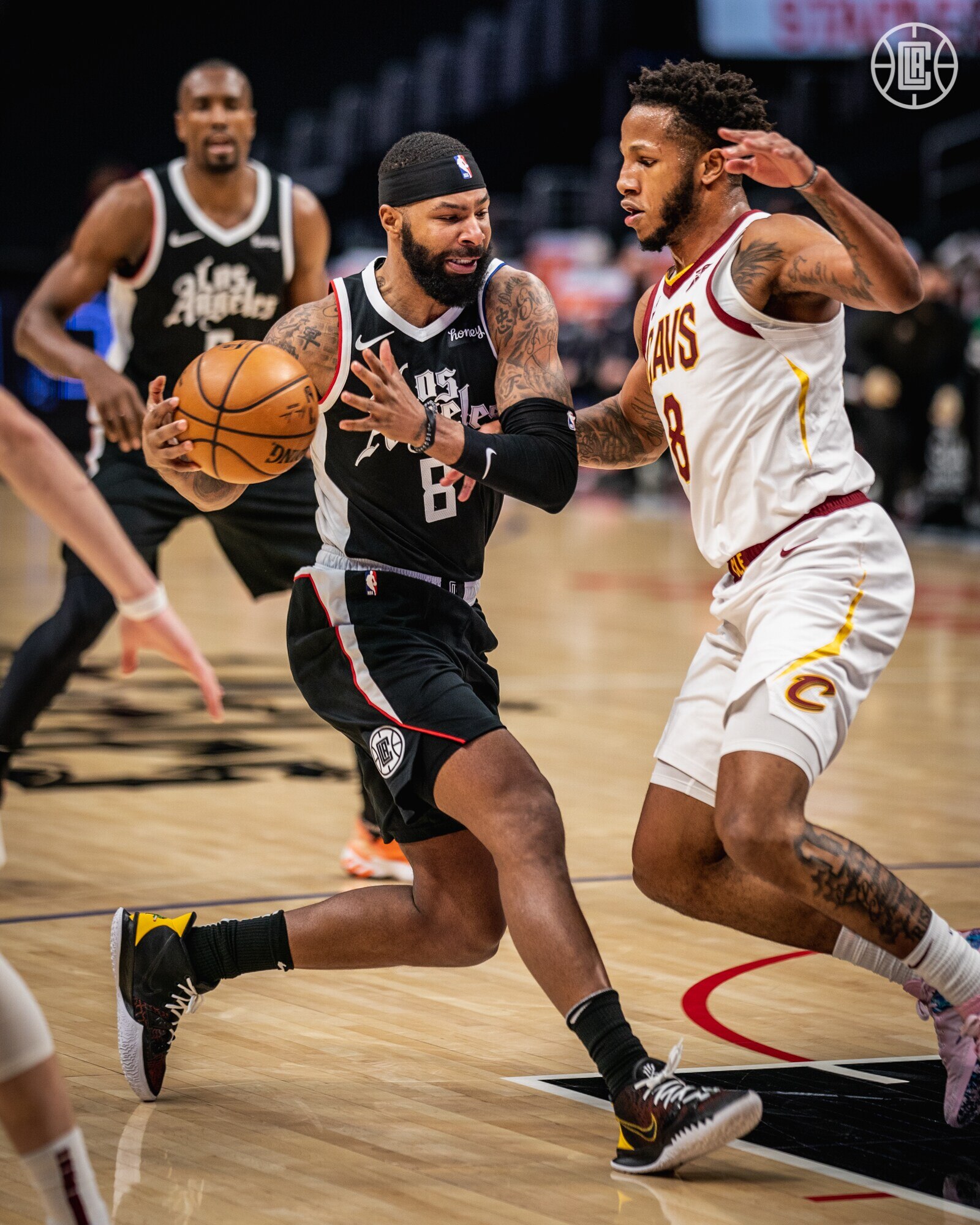 The LA Clippers beat the Cleveland Cavaliers on Monday night in what ended up being their best game of this young season. Paul George—the reigning Player of the Week—put up 26 points on 10/20 shooting from the field (5/11 from the three) with 5 rebounds, 3 assists, and a steal in 40 minutes.

In our preview, we noted that the Clippers might be (even more) short handed than normal. But Reggie Jackson did in fact start despite his thigh/patella contusion and Luke Kennard came off the bench after missing a game and a half due to chest discomfort.

Check out our recap below:

Both teams came out on fire: through 12 minutes, the Clippers were shooting 52% from the field (53% from three) and the Cavaliers were at 67% (56% from three). The Clippers were led by—who else?—Paul George, who had 11 first quarter points, while the Cavs were led by Donovan Mitchell and Evan Mobley (14 and 12 respectively). Neither team was playing particularly tight defense, evidenced by the fact that there were only two total fouls called in the first quarter.

Despite their sharp shooting, the Clippers carried a six point deficit into the second quarter. But the Cavs’ biggest lead to that point was 12, and the Clippers’ continued to fight back, eventually evening up the score at 64 by halftime. Paul George ended the half with 18 points, and Mitchell and Mobley had 16 each.

Both teams slowed down a bit in the third quarter, as the Clippers barely edged out the Cavs, beating them 24-23. Paul George’s jump shots were not not falling at the same rate, but Marcus Morris, Sr. (who finished with 20 points), Reggie Jackson (18 on the night), and Mann (16) all helped keep the Clippers afloat.

The four quarter was a rollercoaster. The Clippers won the quarter by 1 point, but it took a 19-5 run in the final 4:37 to secure the win. Norm Powell tied it up with just over one minute to go, Paul George put the Clippers ahead about 20 second later, and then they were able to survive the foul-and-free-throw possessions to win the game by two.

Another Positive Norm Powell Game: Norm had an efficient 17 points (5/6 from the field; 6/7 from the FT line) and two steals in 28 minutes. Moreover, as noted above, he had two of the biggest shots of the game. Not only did he tie the game on a driving lay up, but he also hit a three with 8:46 to go that kept the Clippers within two possessions and made six free throws in the fourth quarter.

Paul George’s Team?: Much of the Clippers Nation discourse, understandably, revolves around Kawhi Leonard and his availability. But what Paul George has brought to the team over the last five games has been incredible and justifiably celebrated. After his stellar play last year (before he got hurt) and his recent production, though, it will be interesting to see if the Clippers have made a permanent shift to a PG-led team, instead of a Kawhi-led team. We won’t know the answer until Kawhi comes back and gets reintegrated but it is becoming increasingly clear that PG is still a superstar who should not see his usage diminished at all—even when Kawhi is 100% healthy. PG might not be the “clear number 2” after all.

That about does it for this recap of the Clippers’ game against the Cavs. As always, check out The Lob The Jam The Podcast and Clips ‘N Dip for analysis throughout the week, and follow us on Twitter to watch the game with us!