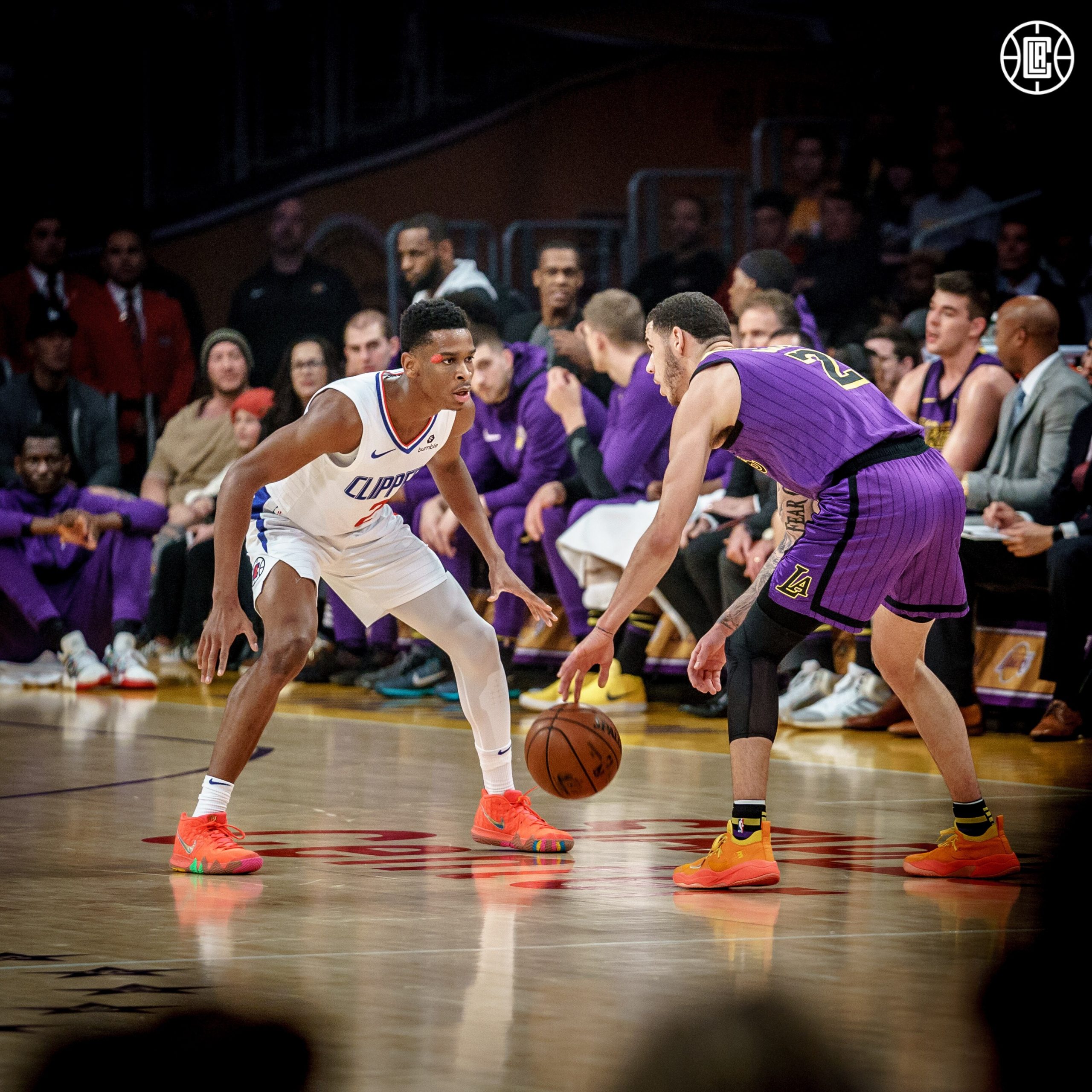 Over the next couple of weeks going into free agency, we will be reviewing a number of players who the Clippers might try to trade for. First up on the list of Clippers trade targets is New Orleans Pelicans point guard Lonzo Ball.

Contract Status: Has one year left on his first-round rookie deal for $11M, will become a restricted free agent after the 2021 season.

There has been a lot of discussion surrounding Lonzo Ball since his time at UCLA. Unfortunately, much of that is due to his father LaVar, whose outspoken nature has won him some fans but earned a lot of enmity over the past few years. There has been quite a bit less discussion regarding Lonzo as a player, even when he was on the Lakers, which is a bit odd considering how unique he is.

Lonzo is a big point guard who can pass, rebound, play defense, and hit threes. Sounds like a good player, right? Well, he is! So far, Lonzo has not lived up to the hype, but he’s been a net-positive player since he first came into the league, which is rare at point guard, and has made some crucial strides since then. Notably, his three-point percentage has ticked up every season, and last year sat at a very healthy 37.5% on 6.3 attempts per game. Now, his poor free throw percentage would make me a bit wary regarding the staying power of that outside shot, but he’s probably at least an acceptable shooter from distance, which is big considering everything else.

The Clippers need shooting around their superstars, but they also need a lot of playmaking, and Lonzo would easily become the best passer and playmaker on the Clippers roster. His ballhandling chops aren’t what they could be (though that’s absolutely something that can be improved upon), but he creates easy looks for others on a regular basis, and is a deft hand at running an offense. With scorers like Paul George and Kawhi Leonard around him, his lack of scoring punch in isolation would be less important – as long as he would hit open threes, he’d be a good fit on offense.

Defensively is where Lonzo truly shines, however. He’s big enough and tall enough to guard quite a few wings, yet has the lateral quickness to stay in front of faster guards. More importantly, he’s a good team defender with positive instincts who regularly gets steals, then igniting his excellent fastbreak playmaking. The other element that generates transition is rebounding, and Lonzo is one of the better guard rebounders in the league. That defense and rebounding would make him a nice eventual replacement for Pat Beverley in the starting lineup, even if he’s not quite the shooter or pure defender that Pat is.

Finally, Lonzo is still young. He just turned 23, and the elements that need improvement in his game (shooting, ballhandling) are far easier to improve than the proficiencies he already brings – passing, rebounding, defense. He could be the long-term point guard of this team, and would also be a potential building block alongside Landry Shamet and Ivica Zubac if Kawhi and George were to leave next summer. There aren’t many trade targets who really fit what the Clippers need in a vacuum more than Lonzo Ball.

After all that, the question must be asked – why would the Pelicans want to trade Lonzo? Well, it mostly comes down to contract. Lonzo will be on the last year of his rookie contract, and if the Pelicans have decided that they don’t want to move forward with him as a key piece of their franchise future, it makes sense to get some value for him now. Teams know that if they trade for Lonzo know, they’ll be able to enter restricted free agency with him next offseason, giving them a leg up on re-signing him. Even if the Pelicans like Lonzo, they might not want to match the kind of offers they think he will get, so finding a trade now makes sense.

As for what the Pelicans are looking for, the key will be fit next to Zion Williamson and Brandon Ingram. As Ingram’s shooting remains unproven (last year was a massive jump for him, and the sustainability is somewhat in question), and Zion is mostly a non-shooter, they need plenty of shooting and spacing. Also, while both of them can make plays for others (as can Jrue Holiday), neither is really a player who can run an offense or consistently get easy looks for their teammates. Therefore, playmakers are welcome. Finally, Ingram is just 23, and Zion is 20. While Jrue is older, the timeline for the team revolves around Zion, which means younger players who can grow with him (as well as Ingram, Jaxson Hayes, and Nickeil Alexander-Walker) are presumably preferable.

Unfortunately, right away, a deal becomes difficult. After all, the Clippers are mostly a veteran team with few young rotation pieces, and one of their own weaknesses last year was a lack of playmaking. To set some ground rules, these trades will be centered on Ball (not with Ball attached to Holiday), and will mostly not involve other teams due to complexity. Completely off the table for the Clippers are Kawhi Leonard, Paul George, and Ivica Zubac, who are too valuable to trade for Lonzo. Two other players that I’ve eliminated are Pat Beverley and Landry Shamet. Shamet is far and away the Clipper who makes the most sense on New Orleans, but he’s also younger and cheaper than Ball, and I can’t see them flipping Landry for a non-star or serious upgrade. Beverley provides some toughness and shooting for the Pelicans, but his age and contract make his being the centerpiece very unlikely. That’s the difficulty with most of the Clippers trade targets this summer, including Lonzo Ball – the Clippers’ players have more value to them than they would elsewhere.

This is the simplest move, and one that kind of makes sense. The Clippers are looking to improve on defense and get younger. Swapping Williams for Ball certainly does that. Additionally, while Lou was better than Lonzo last year, he’s much older, and a sharp downswing could come at any time. The Pelicans would be interested because Lou is the kind of scorer and playmaker who they needed at times last year to get a bucket or get to the line, and because his own contract expires in a year. Lou will help them in a playoff push this season, at which point they can evaluate if he’s someone who they can keep as a veteran presence long-term or they’ll let walk to clear cap space.

However, ultimately, I don’t think either team does this deal. If Ball improves he could be a better overall player than Lou next year, but the Clippers really need Lou’s scoring and ability to get downhill, things which Lonzo does not provide. Simply, the Clippers are trying to win a championship, and getting Ball for Lou is probably a downgrade on that front. For the Pelicans, while Lou will help them, he’s almost certainly not a long-term piece, and they’d probably want some return for Lonzo that lasts longer than a single season.

Trade 1b: Lou Williams to Philadelphia, Mike Scott and Matisse Thybulle to New Orleans, and Ball to Clippers

The reservations on the Clippers end would remain in this deal, but this would answer New Orleans’ problems, in that they’d get a young piece with huge defensive upside and some shooting to put around Ingram and Zion. Philadelphia gets a veteran ballhandler, scorer, and playmaker who would fit well next to their core players, and would help with a championship push this season. Again, the main hold up would probably be on the Clippers end due to the decrease in scoring.

Another simple trade, but one that makes less outright sense than the Lou deal. The Clippers would sign and trade Montrezl Harrell for Ball, enabling them to get an asset for a player who was leaving anyways. Rather than signing Trez outright, the Pelicans would be able to swap him for Lonzo, which would take up less of their cap. Harrell is a veteran who could come in and immediately provide them with a scoring push off the bench while also being able to fill in for Zion as needed.

The issue is that Harrell is a very similar type of player to Zion – except worse. While that can make for an effective backup, the Pelicans probably don’t want to pay a fairly hefty contract to a player who does the same kind of stuff as their franchise cornerstone. That’s not even taking into account Jaxson Hayes, another rim-running big man who had a promising rookie season on his own merit. Harrell just doesn’t make a ton of sense in New Orleans.

I think this is the deal that probably makes the most sense. The Clippers don’t give up any key rotation players, adding Ball to a guard rotation with Lou, Beverley, and Shamet. While they would lose their own recent 2019 picks, the Clippers are in win-now mode, and Kabengele in particular doesn’t seem all that close to helping the Clippers win a ring. McGruder would be a depth loss, and Mann has shown a lot of promise, but it’s unlikely that he’s ever as good as Ball was last season, and he’s actually a year older than Ball as well.

For the Pelicans, they get a veteran guard who can sop up some minutes, a young guard with potential on both sides of the ball, and a long-term big man prospect who could play next to Zion due to his floor-spacing abilities. The Pelicans want to win, but they also aren’t in a huge rush, and would have the time to develop Mann and especially Kabengele over the coming years. It’s not great value for Ball, but the timeline and overall fit is much better than the other deals.

The Clippers probably won’t trade for Lonzo Ball. While he’s a player who fits well with their stars, the Pelicans probably wouldn’t have interest in most of the potential packages the Clippers could offer, and the Clippers’ most enticing asset (for the Pelicans), Landry Shamet, is probably off the table for Lonzo. Larger three-team deals might work better, but those are always quite complicated, and it’s never smart to bank on those coming to fruition. Ultimately, I think Lonzo Ball would is one of the better trade targets for the Clippers, but I can’t see a deal happening.