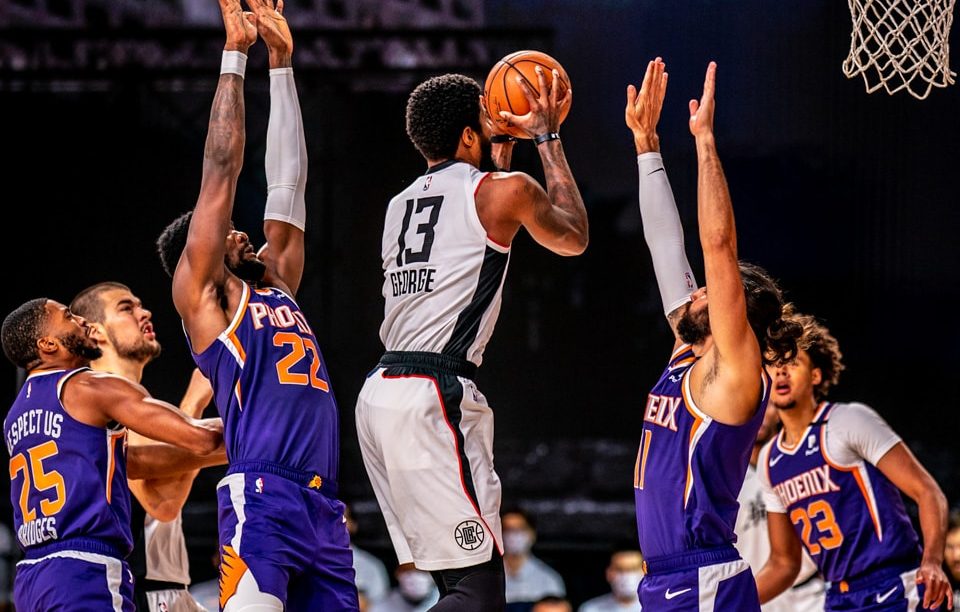 It got dicey as the visitors lost almost all of a 30-point lead, but the Clippers were able to survive against the Phoenix Suns as Paul George led the way with 39 points on 15-24 shooting. George’s play was the catalyst in the Clippers’ original efforts to build their lead, as well as their survival down the stretch–despite Kawhi Leonard’s abysmal night, shooting just 4-21 from the field.

The Clippers’ starters, who entered tonight boasting a league-best +38 net rating, wasted no time in jumping out to an early lead against the Suns, earning an 18-9 lead midway through the first quarter. Early on, it was Paul George and Nicolas Batum who were the standouts, with George scoring 14 points in 9 first-quarter minutes and Batum hitting a pair of threes and adding three assists while drawing the defensive assignment against Suns star Devin Booker.

If the Clipper’s strong opening was perhaps predicted by each team’s lineup data, the way the game turned as second unit lineups bridged the first two periods was surely unpredictable. Playing in a four-guard lineup with a Reggie Jackson – Lou Williams – Luke Kennard trio that has been tumultuous (to put it kindly) defensively, George continued to rain fire on the Suns’ reserves. I feel a little bad for backup guards Jevon Carter and Langston Galloway, who had very little chance to impact the game before somehow finding their bench lineup a -19 in under 4 minutes of play as the Clippers began to flirt with a 30-point lead.

Surprisingly, the usually-prolific Lou Williams was a quiet participant in the onslaught as Luke Kennard put up a quick 13 first-half points and Reggie Jackson kept the offense flowing with 5 points, 5 assists, and 0 turnovers before halftime.

Good things can’t always last, though. The Suns, who entered the night in sole possession of first place in the Western Conference, took their first-half beating in a fashion that resembled the Clippers’ scrappy loss to Utah on Friday moreso than their 50-point crushing at the hands of the Dallas Mavericks a week ago. By halftime, a once 31-point lead was down to 20, and the Suns would continue to slowly chip away at the deficit until it was just 7 entering the 4th quarter (they’d get as close as 1 during the fourth, but never quite tie the game).

For the Clippers, some things started to unravel as the second half progressed. Serge Ibaka contributed just 0 points and 3 rebounds through three quarters as his minutes were limited by foul trouble. That resulted in the early insertion of Ivica Zubac in the third, priming the Clippers for a late-third lineup where a tired Zu was asked to anchor the aforementioned triumvirate of poor defensive guards. It went about as expected, with the Suns mounting 7-0 run in the final 2:00 of the third and continuing their offensive spurt in the fourth as Ibaka re-entered the game and struggled to stand in for Zubac’s stalwart defense anchoring the team’s porous second unit.

Fortunately for the Clippers, Serge’s shot began to fall after a rough 7 quarters in Utah and Phoenix, as he hit two huge threes in the early fourth to keep the surging Suns at bay. Those shots, plus timely contributions from George and Jackson, helped the Clippers trade baskets while they struggled defensively, buying time until Kawhi Leonard and Nicolas Batum could return and stabilize the defense. I didn’t even notice this live, but the return of the Clippers’ starters began a stretch where neither team scored for exactly three minutes, from 8:43 remaining to the 5:43 mark.

The 30-point swing made for a dramatic storyline, but ultimately this game got right to the point you’d expect a game between two good teams to get to–close in the fourth quarter, and even with some high emotions as Devin Booker shared choice words with Paul George. It appears as though everyone in the league is looking to get their shots in at PG after he had some bad performances in the playoffs a few months ago–fair enough. I’d throw up Booker’s playoff numbers for comparison but he has yet to appear in the post-season through the first five years of his career (a spell that will surely be broken this year with Chris Paul leading the Suns). George, of course, has only missed the playoffs once in his ten-year career, due to injury.

For the Clippers, winning in spite of Kawhi Leonard’s 0-6 shooting in the final frame is certainly enough to walk away feeling fortunate–even as fans were ripping their hair out as a red-hot Paul George watched Kawhi miss shot after shot down the stretch (don’t underrate Mikal Bridges’ stellar defense to deny George the ball whenever the offense would have flowed in his direction. The Clippers chose to counter when the Suns overplayed George instead of forcing the ball his way, and they did produce good shots because of it–Kawhi just couldn’t hit anything tonight). The last bits of tension were diffused as George drove in the closing seconds and found Nicolas Batum for a corner three that put the Clippers ahead by 6 with just 12 seconds to play.