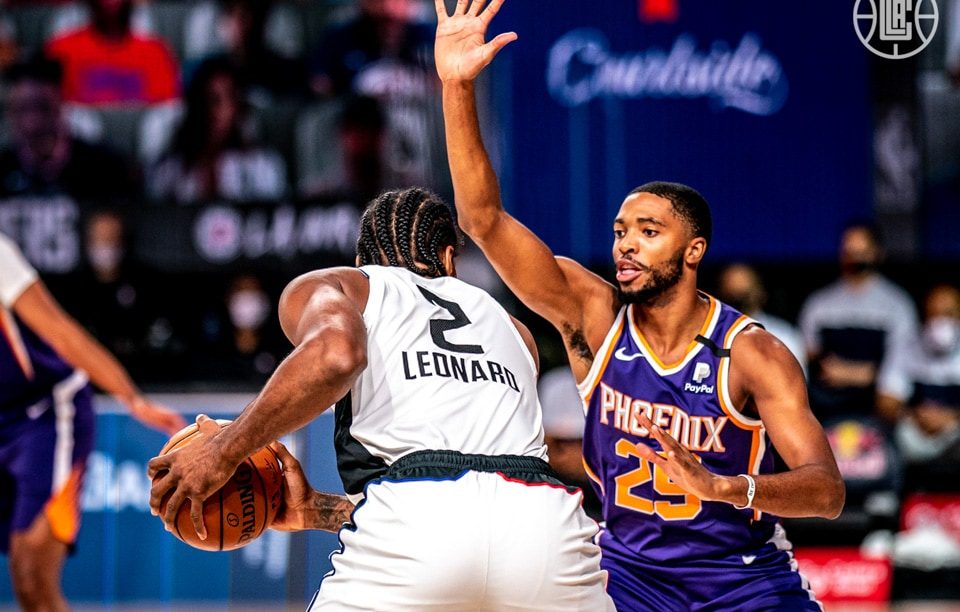 After LAC blew 30 points of their 31-point lead but found a way to survive on the road against a fierce remade Suns squad, I’m left to dole out Clippers vs Suns player grades while navigating this contest’s extreme highs and lows.

Patrick Beverley: B+. It wasn’t Pat’s most impactful night on the offensive end, as he tallied a low-volume 7 points (just 1 3PA) and no assists. But he led the team with 9 rebounds and made good contributions defensively, particularly down the stretch as the Clippers dug out a win.

Paul George: A. Nits to pick: 5 turnovers and only 2 FTA. But you don’t need a perfect game to get an A, just a damn good one. And Paul George was damn good against the Phoenix Suns last night–from 22 points in a +27 effort in the first half where he was the backbone of their run to the (kind of) game-winning assist in the closing seconds, he was unconscious from the field and spectacular in defensive bursts when the team needed a lift. The MVPG campaign is built around nights like this…

Kawhi Leonard: D. …in part because it was a tale of two stars for LAC tonight. While George thrived, Leonard’s offensive game sputtered tonight. He finished with just 15 points on a miserable 4-21 from the field (he was 2-4 in the first quarter and basically didn’t do anything the rest of the night), and in contrast to his struggles shooting the ball against Utah there were no major contributions from Kawhi in other areas tonight: just 6 rebounds, 3 assists (2 of which came in the first quarter), 1 steal, 1 block, and 2 turnovers. So, why a D instead of an F? Two reasons: first, he was still good defensively tonight, which is half of the game after all. Second, the Clippers’ strong start began with the offense flowing through him in the mid-post. He just couldn’t really do anything on that end of the floor after that.

Nicolas Batum: A-. It’s amazing how Nic can plug holes and do whatever is asked of him. Tonight, he was tasked with guarding Devin Booker. He didn’t freeze him out by any means but he did a solid enough job containing one of the most explosive scorers in the league. He hit four of his seven threes, a healthy volume boost over prior nights, and is starting to look a little more confident and aggressive as a scorer. I found myself looking forward to his return to the floor when things got dicey because he’s probably been the third-best Clipper so far this season and was the second-best tonight. That he hit the dagger corner three to seal the game was perfectly fitting for his contributions. The Clippers paid Marcus Morris $64M and are hardly missing him so far (though imagine their offensive potency when he’s added to the mix).

Serge Ibaka: C. Serge gets saved a letter grade because he made some important offensive contributions in the final frame, scoring all eight of his points on a pair of threes and a trip to the foul line after an offensive rebound over Dario Saric. But he was invisible–0 points on 2 shot attempts–through three quarters and struggled with foul trouble as Deandre Ayton controlled the paint on both ends of the floor. It’s worth wondering if Serge is the better option against worse centers but Zu is the guy who can hang tougher against the better bigs in the league.

Luke Kennard: A-. This is a fringe A-/B+ for me, but I decided to be friendly because he was part of the Clippers’ 18-0 run that really extended the lead at the start of the second quarter and gave them a massive margin for error as the Suns outplayed them for much of the middle of the game. He put up 14 points on 5-7 shooting and 2-3 from three, but 5 of his points came on easy fast breaks where Paul George fed him layups (one an and-one on a touch foul). I still want to see Luke be more assertive in creating for himself and others, but as he has more scoring nights like this his confidence and comfort will grow.

Ivica Zubac: C. Similar to Ibaka, Zubac gets saved from a D-level individual performance by being an important part of one key stretch of the game–like Kennard, it’s that 18-0 run to start the second quarter (this will be trend on the bench). But on the whole, Zu (and Ibaka) got outclassed around the rim by Ayton and didn’t win the clash of styles with stretch-4-turned-backup-center Dario Saric, who outplayed Zu for a stretch in the third.

Lou Williams: B-. I’ll look kindly on a pretty mild Lou Will night–4 points, 2 assists, 1 rebound, 1 steal, 2-6 shooting in 21 minutes–because it takes a real team-first attitude for a guy who has averaged 20.4 points on 15.6 shots per game over the last three years to take a backseat when things are clicking for others and stand by for nights when he’s the one feeling it, like against Minnesota and Portland last week. The Lou we’ve seen the last few years is probably the best version of him, but he’s sacrificing that so far this season to be the version of himself that’s best for this role on this team, and that’s special stuff. I’ll never get mad at Lou for low volume when volume is what he’s sacrificing for the team’s sake.

Reggie Jackson: A. Reggie was great tonight… even if I would have personally brought Patrick Beverley back for him a couple of minutes earlier in the fourth quarter. He put up 7 points, 6 assists, 2 rebounds, and 0 turnovers in 16 minutes, including 5 points and 5 assists in that spectacular second-unit shift in the first half (his last bucket and assist were also timely, coming early in the fourth with LAC scrapping to hang on until their starters re-entered). Reggie was not “good for Reggie” tonight–he was just plain good. He kept the ball moving, navigated the pick-and-roll patiently, and made simple plays to produce efficient offense for himself and other without mistakes. He was everything that I’ve complained he is often not, and he deserves tremendous credit for it.