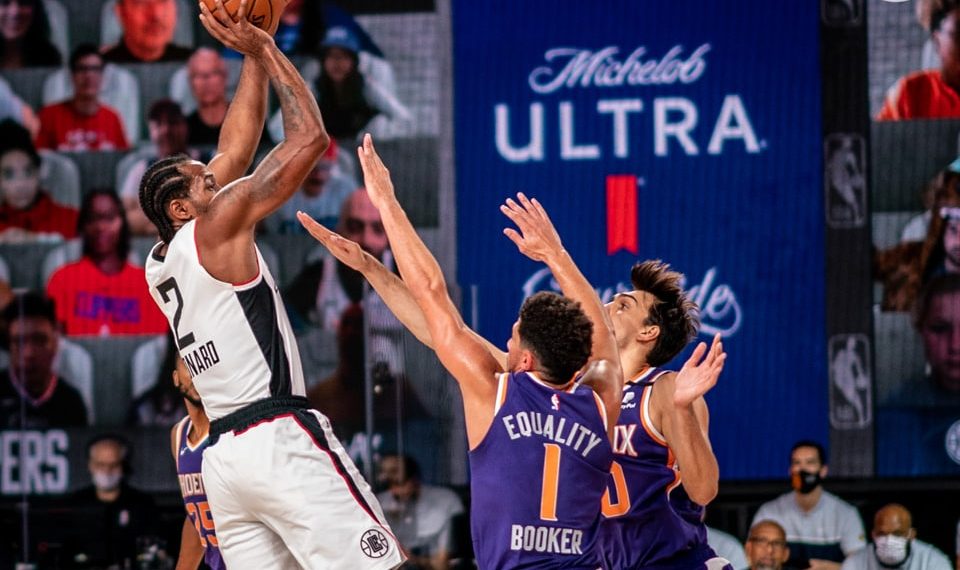 Clippers vs Suns Game Preview: Atop the West

The Phoenix Suns (5-1) sit in sole possession of first place in the Western Conference. It’s early, but that’s still gotta be pretty cool for a fanbase that has seen ten straight lottery seasons (including a 48-win 9th place finish in 2014. The LA Clippers (4-2), for their part, share second place in the conference with the Los Angeles Lakers as they look to improve their standing in Phoenix on Sunday. Read on for a full Clippers vs Suns game preview.

After a string of one-sided contests, the Clippers got back to competitive basketball Friday night in Utah, as they fell to the Jazz 106-100. There’s a difference between playing well–executing your offense, getting good looks, drawing fouls, avoiding turnovers, digging in on defense, rebounding the ball–and shooting well, and the Clippers did more of the former than the latter on Friday. Generally, if you play well you’ll be a consistently good team as the shooting comes and goes, and LA will hope for some friendlier bounces Sunday evening as they head to Phoenix.

Still without starting power forward and 64 million dollar man Marcus Morris, the Clippers have found a fantastic first unit with veteran signee Nicolas Batum stepping in. Their starters, including Batum, have an astronomical +38.2 net rating in 53 minutes together–the best mark of any five-man unit in the league with at least 25 minutes so far this season (it helps, of course, that this lineup was spared by Kawhi Leonard being out for the team’s 51-point loss to the Dallas Mavericks).

It’s been the second unit where things have been more up-and-down for LA. Reggie Jackson is a high-chaos bench guard who has both derailed good games and sparked runs when the team was struggling. Sharpshooter Luke Kennard is still settling into his new role after going a year between NBA games due to injuries and the COVID scheduling. Perennial 6th man of the year candidate Lou Williams has offered modest individual output (by his standards) to start the year. All of them are below-average defenders at the guard position, and when two–or three–of them play in tandem the Clippers’ defense crumbles. The sample sizes are tricky but take a gander:

The important caveat here is that not only are none of these minute samples anywhere close to stable, but the Clippers’ trend towards blowouts in the early weeks makes a lot of the minutes included garbage time (Lou Williams hasn’t really played garbage minutes, but Reggie and to a lesser extent Luke have). For example, Jackson played fewer minutes in the Clippers’ three competitive games combined than he has in each of their three non-competitive games, making the “Reggie, no Lou/Luke” sample weighted entirely in the second halves of blowouts.

Figuring out the guard rotation to build good defensive lineups should be a little easier when Morris returns, thanks to Batum’s emergence and versatility, but it seems inevitable that eventually only one of Williams or Kennard will be able to feature prominently in the team’s playoff rotation without causing defensive issues. Lou is 34 years old and on an expiring deal, while Luke is 24 and just signed a four-year extension that will keep him a Clipper through the 2025 NBA season… but Lou is just flat-out better and the title window is now.

Ty Lue has experimented with different second unit combinations recently, including four-guard lineups that feature all three backup guards and Ivica Zubac with either Terance Mann or Paul George at power forward. He’ll keep tinkering–surely veteran shooter Patrick Patterson will get more looks, although he’s a horrendous defender in his own right–and things will get easier to balance when Morris’ return pushes Batum to the bench and gives them another versatile defender.

After this game against Phoenix, the Clippers move on to a very soft stretch of schedule featuring 9/10 games against lottery teams, so they should have plenty of leeway to test out new looks in the coming weeks.

Are the Phoenix Suns the best team in the Western Conference? Well, 5-1 record and first-place status aside, probably not. They’ve played three playoff teams in their first six games compared to the Clippers’ 5 (the Lakers, tied with LAC at 4-2, have also played 3 playoff teams so far), and their starting lineup actually has a -6.0 net rating despite their record.

But the Suns are good, and it makes sense that they’re good. After an 8-0 bubble record that included a buzzer-beating win against these Clippers, Phoenix went out this off-season and added Chris Paul and Jae Crowder to their starting lineup, instantly vaulting them from fringe playoff team to one of the better teams in the West. I’m not discounting them as a threat to the very top of the conference, but I’ll need to see more than 6 games to get an accurate gauge–and the Suns themselves need more than 6 games to figure things out with a bunch of new pieces.

Paul and Crowder join Phoenix’s spectacular young trio of Devin Booker, Mikal Bridges, and Deandre Ayton in the starting lineup. Booker is one of the most prolific offensive players in the NBA, Bridges’ floor appears to be an elite 3-and-D forward, and the 22-year-old Ayton impacts games with versatile offense and rim protection (while perhaps still finding his way to being a consistent winning player in the NBA). Phoenix’s depth still needs to be worked out a little bit–though their starting unit’s negative net rating suggests that their lineup combinations are working out so far. Cameron Johnson is a really nice backup forward who is a lethal shooter, while Dario Saric is… also a really nice backup forward who is a lethal shooter. Saric, when healthy, has been getting small ball C minutes in place of Ayton–a matchup where the Clippers should have a huge physicality advantage. At guard, Cameron Payne, Jevon Carter, and Langston Galloway all provide solid depth but none feels quite like the third guard on a contender.

When all is said and done, I feel like we’ll enter the playoffs discussing how the Suns measure up against teams like Denver, Dallas, and Utah rather than focusing on them a race for the top seed–but we’re well aware of how dangerous that next level of very good playoff teams can be in a series when things start going their way. I actually really like this Suns squad this year, and I think Chris Paul was a great acquisition for them and is being underrated again after being overlooked in Oklahoma City a year ago. I’m excited to get a first look at how they match up with the Clippers.