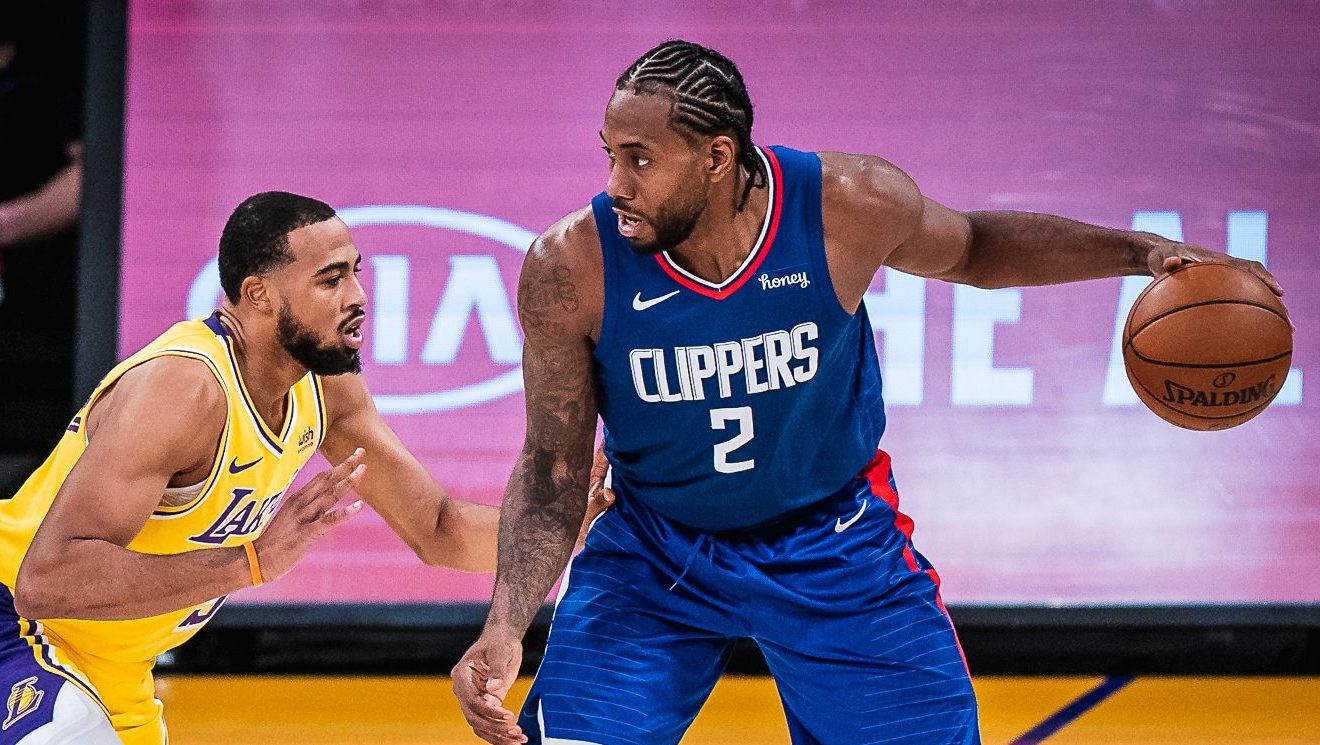 The NBA’s 2021 free agency period will officially begin on Monday afternoon, as teams are allowed to begin negotiating with free agents Monday at 6pm Eastern time. While no official agreements can be finalized until noon Eastern time on August 6th, that Monday evening time is when we’ll begin to get the flurries of reported activity that signify the beginning of free agency. For the Clippers, there are a few big things we’ll be watching, but their three draft additions complicate things on the fringes. We already know from the last few weeks of off-season prep that the Clippers don’t have many avenues to add talent in the next week, but their surprising activity on draft night has exacerbated another limitation the front office was already dealing with: limited roster space.

Just take it at its most basic element: the Clippers finished last season with a full 17-man roster, with all 15 NBA spots filled along with both two-way slots. Now they’ve added three more guys to that equation, so 20 has to become 17. And they have to make room for any outside talent and depth they may want to add to the picture. Let’s take a peek at the state of the roster heading into free agency. First, the Clippers have 7 players whose salaries are already locked in for the 2021-22 NBA season: Paul George, Marcus Morris, Patrick Beverley, Luke Kennard, Rajon Rondo, Ivica Zubac, and Daniel Oturu. Jay Scrubb, who the team essentially redshirted last year on a two-way contract, is under contract again on another two-way deal next season, making for 8/17. We’re not gonna worry about the actual dollar figures for each player just yet, since they don’t really matter for the Clippers’ purposes this summer unless the team is looking to make the financial math work for a trade. In terms of flexibility or “creating space,” suffice to say that the Clippers aren’t going to.

Of those 8 guys, the only one who is a real candidate to be cut is Oturu. The other are all core rotation players except for Kennard and Rondo, and neither makes a whole lot of sense to be waived: Luke is slotted for a much bigger role next year after an up-and-down 2020-21 and has 4 years left on his contract, while Rondo’s $8.25M expiring deal offers more value as a potential trade chip at the deadline than any minimum-salary 15th man would contribute in limited regular season minutes. Scrubb is certainly expendable if another prospect beats him out for his spot, but generally you’d expect that the team didn’t hold on to him through an injured 2021 campaign just to cut him before he got a chance for reps in 2022.

Then, we’ve got the player options. Kawhi Leonard has a $36M option, and I don’t know if he’ll pick it up or not–he can either take the $36M and tack on an extension for 4 additional years that would total 5 years and $217 million, or he can opt out, sign a 1-year deal for $39M, and then next summer take a 5 year “supermax” contract that would bring his total salary to $271M over 6 years. The first option secures the most possible guaranteed money this summer while the second maximizes his long-term earnings. Regardless of which path he takes, I have a very high degree of confidence that Kawhi and LAC have likely already figured it out and are just waiting for the window to open so they can finalize his deal. More interesting is the $9.7M player option for Serge Ibaka. He’s expected to opt in after having back surgery, but in theory if he opts out the Clippers can give him a new contract starting at $11.1M. Whatever the price point is, you’d expect that Serge stays as long as Kawhi stays. That brings the roster total to 10/17.

On Thursday night, the Clippers were aggressive in chasing talent. They took major upside gambles with the 21st and 51st picks in the draft, trading up to select Tennessee shooting guard Keon Johnson (who was projected in the late lottery) and then buying into a late pick to take a flier on B.J. Boston, a highly-touted high school prospect who had an abysmal solo collegiate season at Kentucky. They also traded a future 2nd to get the 33rd overall pick, which they used to select Jason Preston, a late-blooming point guard from Ohio University who is considered one of the best pick-and-roll playmakers in the entire draft. I’ll leave draft analysis for another column, but you’d expect all three players to be on the team’s 17-man roster next season (like Scrubb, there’s a chance Boston simply gets outplayed and loses his spot, but they wouldn’t have bought the pick if they aren’t intending on carrying him into the season). Also, given the nature of rookie impact in the NBA and the long-term upside projects LAC chose this year, you’d expect none of those guys to be in your 10-man opening night rotation (relax, they’ll get chances over the course of the year). 13/17 spots full.

The team also has two non-guaranteed contracts for Yogi Ferrell and Terance Mann. Safe to say, Ferrell is not going to make the team next year and Mann certainly is. I’ll keep Ferrell on the list for now since he’s technically under contract right now, but he’s one of the first and easiest cuts when it comes time to trim the list. So, the roster is now at 15/17 going into free agency. Here’s the positional breakdown:

So… the Clippers need some forward depth. Right now they’re sliding Paul George over to small forward (which isn’t even really out of position for him) and starting Morris at power forward, but their only other options are 3-guard lineups, 2-big lineups, and a guy who couldn’t make layups in college last year. Obviously, that’s gonna change before we actually see any games, but it goes to show that the team already has a nearly-full roster with major holes, major redundancies (8/17 spots used on guards), and three zero-contribution slots (Rondo, Oturu, and the injured Kawhi Leonard are all unlikely to be impactful players next year). Let’s consider the Clippers’ own free agents:

Those 5 Clipper free agents take us to 20 players… before they even look at adding outside free agents to the picture. Here’s a more filled-in depth chart:

Okay, time for Lawrence Frank to go a little scorched earth and trim this roster down. Yogi’s non-guaranteed deal is gone. Coffey, Patterson, and Cousins are all not re-signed. Oturu is cut despite having a guaranteed contract for next season. Sorry, but if the team is playing 8 guys and DNPing him on shorthanded regular season nights where only 9 healthy players are available, it’s probably a sign he’s not going to be sticking around. Let’s see what this new 15-man look (including both two-way guys, giving the Clippers 2 open spots on the 15-man roster to play with) provides:

Okay, that’s starting to feel a bit more manageable. Now it’s just a matter of nailing down the precursors to get to this point (Kawhi, Ibaka, Jackson, Batum) and finding your last couple of players. The areas of need are obvious: the Clippers have got to find a capable wing to back up Paul George, along with a 5th big type who can provide coverage at both PF and C in a pinch. I wrote a little this week about wings/forwards and bigs that the Clippers could look at in free agency, but I’ll regurgitate a few names here. At backup small forward, guys like Garrett Temple, Tony Snell, Solomon Hill, Sterling Brown, and Rodney Hood are all options at the minimum. Isaac Bonga could also be an option, although his youth might inspire teams to offer a bit more money. If Batum does give the Clippers the aforementioned non-bird discount (or if the taxpayer MLE becomes available because he departs), the Clippers could spend a little more on the wings, looking at guys like Kent Bazemore, Reggie Bullock, Trevor Ariza, Otto Porter, Rudy Gay, and Moe Harkless. And despite the fact that it would be a drastic paycut, I’m starting to put LA native DeMar DeRozan back on the board at that price point as well–if he’s as serious as rumors indicate about wanting to come home to LA at a steep discount and as bad a fit with Russell Westbrook as we all know he would be, Clipper exception money might appeal to him.

For a depth big, the Clippers’ shortlist could include Frank Kaminsky, Ersan Ilyasova, Trey Lyles, Marquese Chriss, and D.J. Wilson–with a longer list of solid minimum-salary centers available who can’t necessarily provide the coverage at power forward that LAC might need. It’s worth noting that the Clippers could backtrack here and consider Amir Coffey for the backup small forward spot and Patrick Patterson as their 5th big… but without ill will towards either former Clipper, these are important spots in the rotation where the Clippers should be able to find better players.

So, looking at it from this perspective, the Clippers could have a relatively quiet free agency period in front of them. I won’t be upset if the only news we get is that the team retained Leonard, Ibaka, Jackson and Batum while adding a couple of guys like Snell and Wilson, but it won’t make for the type of sexy free agent acquisitions LAC has turned into routine in recent years.

The last remaining wild card here would be a potential trade. I won’t spend too much time on this last point because of how endless the possibilities are without any substantial leads, but just looking at the Clippers’ roster and situation with the Kawhi injury, Patrick Beverley and Rajon Rondo look like two guys who could be on the move. Rondo, of course, had nothing left to offer in the playoffs last year at 35 years old and seems like an assistant coach who takes up $8.25M and a roster spot at this point. Beverley was fantastic in the playoffs against Utah and Phoenix, but $14.3M contract is expiring and between his own age (33) and injury history, it’s fair to question if he’s going to be a part of the Clippers’ next big title push with a healthy Kawhi Leonard in 2023. Add in the fact that this team could really use an offensive boost in their point guard rotation and it begins to make sense that LAC could look to deal. We can’t project the implications of a trade on free agency until we actually have a framework of a potential deal, but the most notable impact would be consolidating the point guard spots, allowing Preston to slide into a 3rd-string PG role and giving the Clippers an extra roster spot to utilize on frontcourt depth while Kawhi Leonard is out.