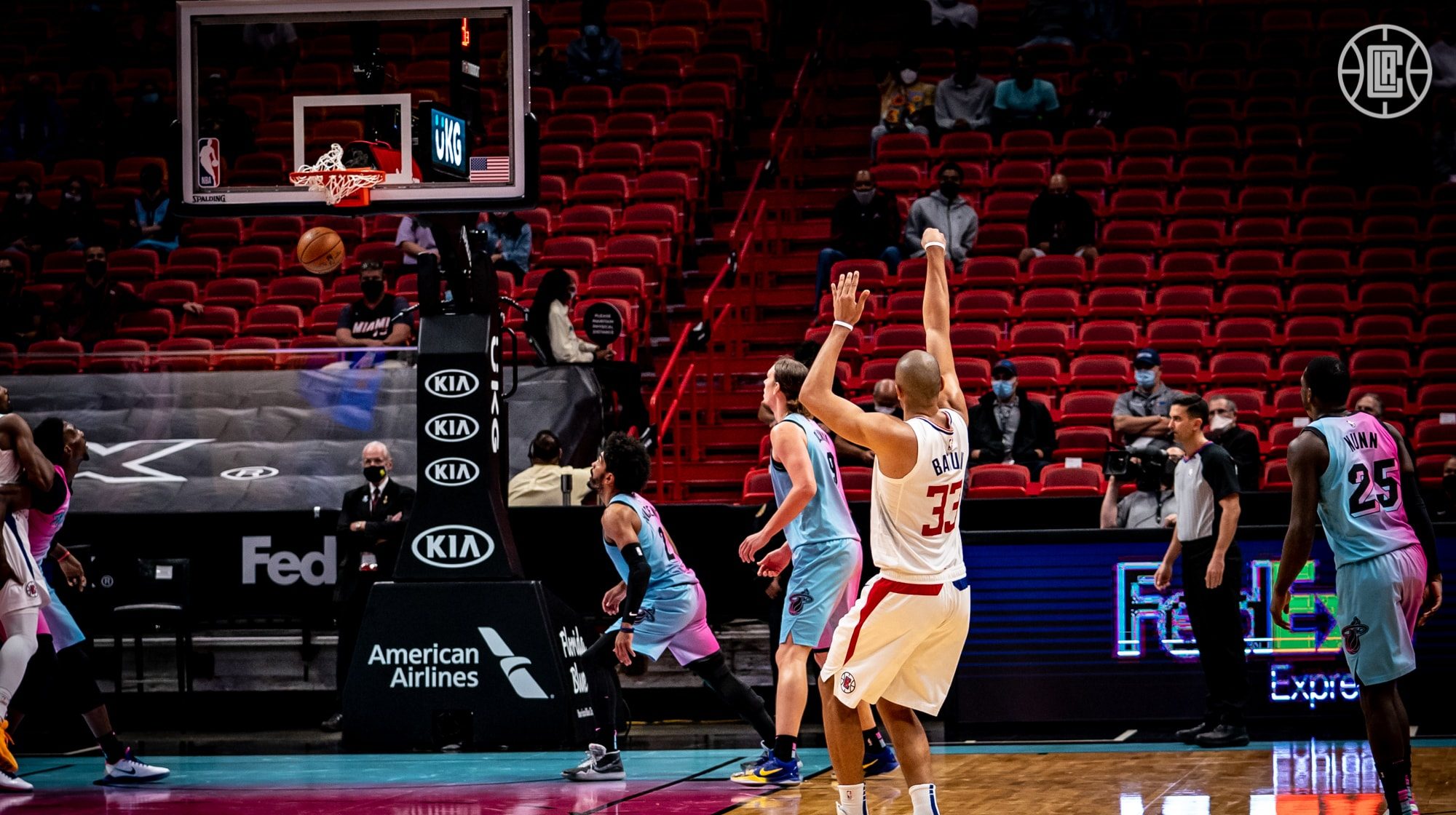 With the NBA’s Free Agency window right around the corner after this week’s draft, we’re taking a broad survey of the options available to the Clippers as they look to keep last season’s Western Conference Finals rotation together while making a few improvements around the edges and attempting to prepare for some time–perhaps a full year–without superstar forward Kawhi Leonard.

To do that, we’re going to more or less work off of last year’s model–breaking down the free agent pool position-by-position (guards, forwards, and bigs) this week and then looking within each position’s list of available players to predict which players could be available in the Clippers’ budget and which would be desirable targets for them. This year, however, there are a lot fewer exciting possibilities as the team has significantly less free agency flexibility than they did last season. Last season, the Clippers had the full non-taxpayer mid-level exception and the bi-annual exception to add players above the league minimum, and the possibility of exploring sign-and-trade deals. This year, because of their financial situation, the team is exceedingly unlikely to be able to use the full MLE, BAE, or take in a S&T player unless Kawhi Leonard opts out of his contract and signs with another team. As long as Kawhi is a Clipper, their only meaningful tool with which to chase free agents from other teams is the taxpayer MLE, worth about $5.7M. That’s not very much buying power, and the team’s first priority with that tool should be Nicolas Batum. If that works out, the Clippers’ only newcomers this off-season could arrive via trade, the draft, and minimum-salary deals. That means the “not happening” tier is going to be much more expansive this season. Players are listed along with any options or restricted status, plus John Hollinger’s BORD$ valuation at The Athletic.

Much like with the guard list, there simply isn’t a lot that the Clippers could do to land one of these guys this summer. Even if they don’t use their taxpayer MLE on Batum, it’s worth just $5.7M while everyone on this list will demand at least an 8-figure deal. And as long as Kawhi Leonard stays with the Clippers, working out a sign-and-trade deal to bring someone in would be functionally impossible as such a deal would hard cap the Clippers at a threshold well below their current team salary number. I’d love for DeMar DeRozan to waltz in and tell the Clippers that he’s willing to leave tens of millions of dollars on the table to play for them–but I’m not holding my breath.

I think pretty much everyone in Clipper nation wants to see Nicolas Batum back with the team next season, and just realistically looking at what they can hope to get for the taxpayer mid-level they’d be lucky to have Nic back at that price point. But if Nic doesn’t use that money–a shade under $5.9M for next year, maxing out at a shade over $18.5M over three years–there are some other intriguing options for the Clippers to explore. On the one hand, Batum could choose to really help the Clippers out and sign for his non-bird minimum. That would be about $3.2M, coming extremely short of his market value but perhaps made more palatable by the fact that Charlotte will still pay him $9M this coming season, along with a wink and a non from the Clippers that they’ll take care of him long-term with his early bird rights next off-season.

Looking at this tier of potential Batum replacements, we’ve got two former Clippers in Jeff Green and Moe Harkless and one can’t-believe-he-was-never-a-Clipper in Rudy Gay. Green and Gay both did Batum-esque roles for the Nets and Spurs last season, with Jeff notably dramatically exceeding his career mark from deep at 41.2% and Gay continuing a multi-year run as a useful key reserve forward. Harkless is in a bit of a rough spot with his career and might not get a ton of interest because he’s a non-shooter, but in the right role he should still be a useful bench player who can defend multiple positions. McDermott will probably get an eight-figure deal, but could shake loose if the Pacers go another direction, while Ennis is a perennially ok player who would be an excellent stopgap rotation piece but an underwhelming Batum replacement. The most interesting name on the list is Otto Porter, just 28 years old and coming off of two injury-ravaged years but only those two years removed from a three-season stretch where he played 213 games and averaged 14 points and 6 rebounds on 50/43/83 shooting splits. There’s a bit of a health risk there but I imagine multiple teams would happily take that gamble with some exception money.

We’re all mostly familiar with these guys, so there isn’t a need to provide a major breakdown. I’ll just say that while Craig and Tucker are likely to stay with Milwaukee and Phoenix, repectively, after just having roles in the NBA finals, it’s easy to imagine any of these other guys shaking free from their current teams and being available for cheap or minimum deals. None of them really excite me, but when you’re looking for high-floor forward depth you can do a lot worse than going with a veteran who you know is going to be a plus defender.

I’d be pretty surprised to see anyone on this list go for the minimum except for Anthony, with shooting at such a premium and all of them more or less established as reliable contributors. Even Nader had a strong season for Phoenix pre-injury and should be able to secure a modest above-minimum deal to return to the Suns. Carmelo is at least an interesting name for the Clippers here because of his ability to score in bunches even at 37 years old, but if Batum is retained that’s too many guys who are best at PF without much utility at SF, and I’m prioritizing Nico over Melo.

Bazemore and Nwaba are out of the Clippers’ price range unless they look at them with the taxpayer mid-level (and even that might not be enough), and I wouldn’t use that tool on them given a bit of a redundancy factor with Terance Mann. The other guys offer some interesting alternatives to the extremely old “veteran” group above, although I’m not sure that any of these players are actually better or more reliable than their over-the-hill alternatives. Sterling Brown is a guy that I really like, but as a 6’5″ tweener wing he doesn’t bring enough size for a team that is already guard-heavy and wing-starved. Bembry is a smart player with a well-rounded skillset, but his one flaw–his lack of three-point shooting–might be fatal, especially within the Clippers’ system. Hollis-Jefferson and Johnson have different strengths but the same killer weakness. Ojeleye has utility as a strong, defensive power forward who won’t do anything on offense except shoot open threes at a mediocre efficiency, so he’d be an interesting Patrick Patterson replacement but probably can’t coexist with him. Overall, there are names here that are worth a call for a third-string role depending on roster needs, but nobody that I put a ton of trust in as the Clippers’ full-time backup small forward behind Paul George.

Valentine and Bonga are both probably going to get above-minimum deals, but neither have proven themselves enough to warrant a contender’s limited resources, so there’s no match here. Diallo has some offensive skill that can’t be ignored, but he’s still just such an inefficient and low-IQ player that he needs to burn off a few more years on bad teams before I’m interested. Jeffries will have his option picked up by the Spurs, and Clark isn’t really any more interesting to me than Amir Coffey.

Justise Winslow is where I really think there could be an upside play low on this forward list. The Memphis Grizzlies are going to decline his team option in order to facilitate today’s trade, which will bring Eric Bledsoe and Steven Adams to Tennessee (at least temporarily), and the 10th pick in the 2015 NBA Draft is going to hit unrestricted free agency with a huge question mark next to his name. In his six NBA seasons, he’s scarcely played in three (including the last two), but he was a promising rookie and averaged 10 points, 5 rebounds, and 3 assists while shooting 38% from three across two mostly-healthy seasons in 2018 and 2019. If he can be that guy again, his defensive versatility makes him a starting-caliber player. I’d be pretty interested in pairing him with a less-exciting, high-floor veteran addition like Solomon Hill to act as an insurance policy.

It’s safe to say that Thanasis, fresh off winning a title with his brother in Milwaukee, is going to get taken care of and stay a Buck. Markieff Morris, on the other hand, had a down season for the Lakers after the hot streak of his life in the 2020 NBA Playoffs, and could very well find himself coming across the hall to play with his brother. But Kieff is strictly a power forward, so in order for the Clippers to keep a balanced roster with options at every position he’d have to replace Patrick Patterson’s roster spot.

Due to his size, poor play, and recent history with the team, I don’t have a ton of love for Rodney McGruder in this space. No hard feelings towards Rodney and I hope his career gets back on track, but roster spots are precious and the Clippers don’t need a 30-year-old who got played out of their rotation two years ago and couldn’t crack Detroit’s last year. Hood, on the other hand, is a much more reasonable upside play. After a torn Achilles cost him most of the 2020 season after a stellar start, and then he was dreadful in 2021 as he worked his way back from it. But it’s not unheard of for guys to be shells of themselves in year 1 after an Achilles and then take a big step back to their previous level of play in year 2, so while there’s “wasted roster spot” downside here there’s also “way outperforms his minimum contract” upside (just like with Winslow, who could also easily be in this category).