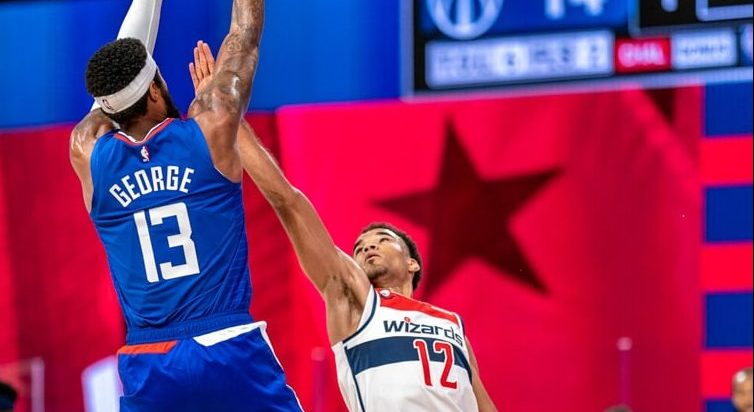 The game started off with both teams playing extremely sloppy offensively. The Clippers, going small with JaMychal Green at center, had plenty of space, but failed to capitalize due to missed shots and errant ball-handling. On the other end of the court, the Clips were overzealous, fouling the Wizards time and again to put them on the free throw line. When the Clippers bench came in, the game shifted a bit – Rodney McGruder had a sweet and-one, and Joakim Noah had some nice defensive plays. It was all capped off by a beautiful three by Terance Mann to beat the buzzer.

The second quarter continued much the same way, with the Clippers’ second unit looking active and engaged. Patrick Patterson is particular looked sharp, draining multiple threes and moving well on defense. However, the Clippers’ defense as a whole took a hit when Marcus Morris replaced Joakim Noah at center with a super small-ball lineup. He got roasted a couple times and just generally didn’t provide any protection at the rim. Still, it was his first time in that role, so it makes sense that he was a bit slow. However, Morris was from the Clippers’ biggest issue – Kawhi Leonard and Paul George looked awful, with numerous bad turnovers and missed shots. Reggie Jackson played well offensively, and JaMychal Green was a presence on the boards, but overall the starters looked out of sync and lackadaisical on both ends.

The 3rd quarter went much the same way, with Kawhi in particular just having a terrible game. He missed wide open threes (0-8 on the night), all short, and was a step slow on defense. Paul George had a couple nice plays, but it just wasn’t enough, and the Clippers were soon trailing by double digits. Doc Rivers subbed in the bench, and while they were able to make a small push, they weren’t making enough shots to really cut into the deficit.

That changed quickly in the 4th quarter. Mann drained a three, and then Green nailed a couple within a minute or so of each other to get the Clippers right back into it. The Clippers turned cold after that, but their defense was stout, with Rodney McGruder and Amir Coffey putting in great effort on the wings, and Joakim Noah battling hard underneath. With no starters in, the Clippers ran most of their plays for Patrick Patterson and McGruder, and somehow, it worked. Their ability to force turnovers and get rebounds while limiting their own mistakes saw them hang around, until they finally took the lead on a McGruder three. From there, the Clippers held the edge for the rest of the game, and never looked in danger of relinquishing their advantage. In the end, with some clutch free throws by Coffey pushing them to the finish line, the Clippers beat the Wizards in Orlando 105-100.

Bench Unit Excels: The Clippers reserves (Mann, McGruder, Coffey, Patterson, and Noah) carried them to the win in this one. They grew the lead in the 2nd quarter, and then won back the lead in the 4th after the starters got them into a double-digit deficit. For them, it was all about hustle and energy on both ends. On offense, the bench regularly moved the ball, revolving around the central hub of Joakim Noah. On defense, they switched smartly, battled in the post, and contested shots without fouling. It was a meaningless game, but it was still a great performance by the unit, and each player stood out. Noah’s passing and rim protection were huge, as was Patterson’s shooting, McGruder’s creation, Coffey’s slashing, and Mann’s rebounding and ball-handling. It was a team effort in the best way possible, and without their reserves there’s no way the Clippers would have beat the Wizards in Orlando.

Off Kawhi Game: While the starting unit as an entity struggled, it was really Kawhi Leonard who sunk the squad, with a singularly awful 3-16 shooting night and a couple of turnovers. Paul George and Marcus Morris had some rough turnovers as well, but at least they hit a decent percentage of their shots. Kawhi just didn’t have lift on his jumpers, and by the 3rd quarter was settling for threes rather than trying to get better looks. It was an awful night for the superstar, but the Clippers will take this kind of performance in a meaningless scrimmage.

Small Ball with Green and Morris: Another interesting element was that the Clippers went small with JaMychal Green (and, briefly, Morris) at center. Green looked much more comfortable in the role than Morris did (though he’s had more experience), especially in providing some support around the rim and snagging rebounds. Notably, his ability to pick and pop created a great deal of space for the Clippers, and it seems like a lineup Doc will return to in the future. Now, both Green and Morris struggled with switching onto smaller guys out on the perimeter, but hopefully practice and better conditioning can improve their ability at least a bit in that regard.

Other Meaningful Takeaways: Joakim Noah’s passing might be more important than his defense for a Clippers team that has struggled with stagnant offense all year… Rodney McGruder’s shot looks better and more confident, and if he has that going, he should be a perfectly good 11th man for the Clips…Reggie Jackson looked solid offensively as a scorer, but he didn’t create much for others, and he struggled defensively, which makes him a good fit offensively but a bad one defensively with Lou Williams.

Well, that’s about it for this one. It was nice for the Clippers to beat the Wizards in Orlando, and they next play on Monday against the Kings, their final tuneup before the season starts in earnest. Ivica Zubac, Lou Williams, Montrezl Harrell, and Landry Shamet are all on their way back to the bubble or have already arrived, so the Clippers should be nearing full strength sooner than later.