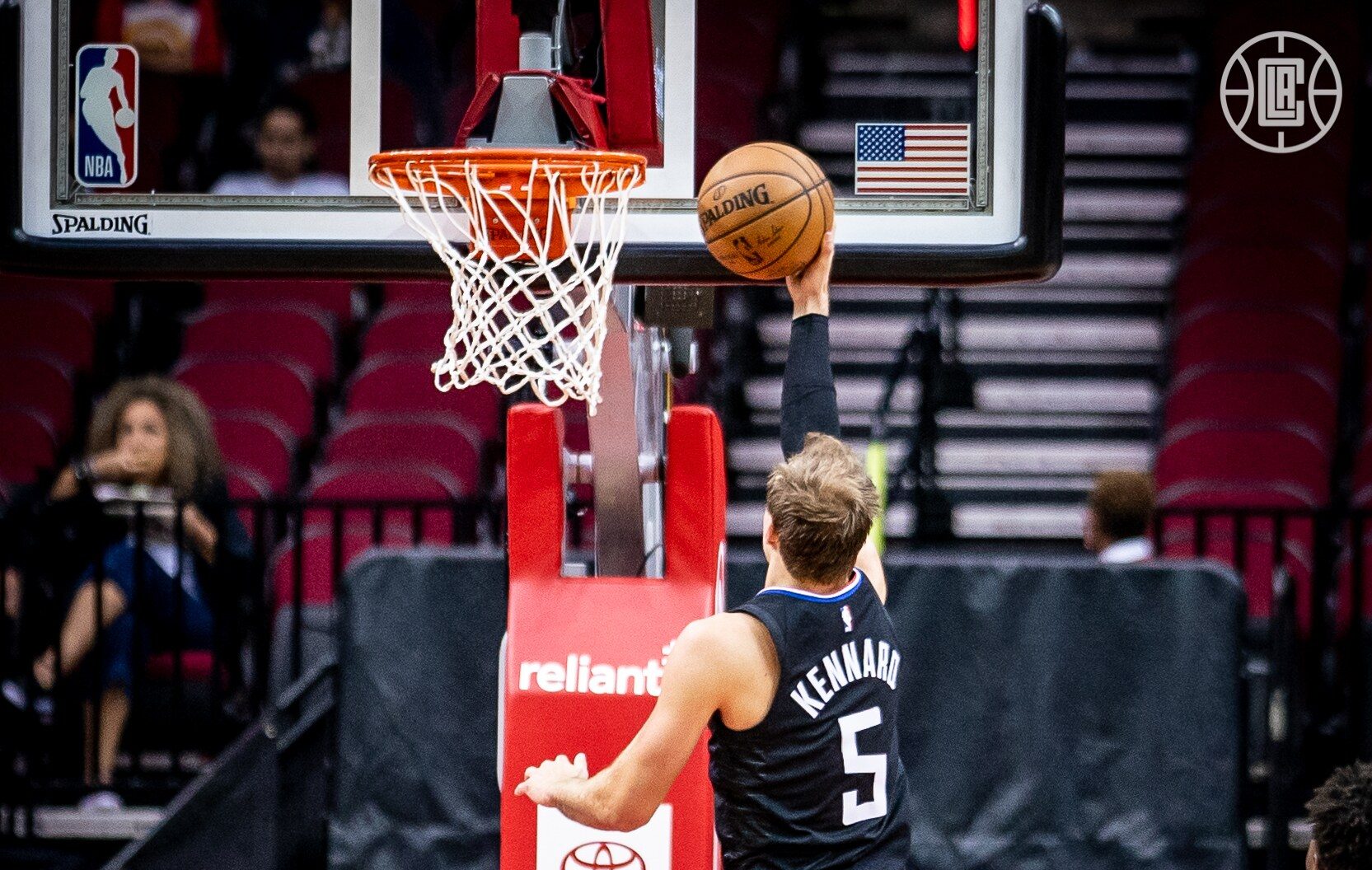 Our 2022 Exit Interview series at 213 Hoops kicks off with a look at Clippers’ sharpshooter Luke Kennard.

Coming into the season, Luke Kennard, like every other Clippers player, was expected to see his role increased in the absence of Kawhi Leonard. Playing less than 20 minutes per game last season, and attempting just 3.6 threes per game in those minutes, it was clear that the Clippers would need to get Luke more shots this season. Having knocked down 44.6% of his threes a season ago, it was always a matter of volume rather than efficiency for Luke, who has been a proven sniper since entering the league.

While every Clipper was expecting at least a slight increase in responsibility with Kawhi sidelined, this quickly evolved into a substantial role increase for nearly everyone, as Paul George went down as well. For a team now desperate for offensive production, Luke Kennard’s role went from an opportunistic catch and shoot guy to someone the Clippers began running plays for. Not only did this change the way he was utilized offensively, but it changed the way opposing defenses approached him. For a guy who was brought in with the expectations of knocking down the clean looks he was certain to get next to Kawhi Leonard and Paul George, Luke found himself as the focal point of opposing teams’ defensive game plan on several nights this season. For a player who had never faced that type of attention at the NBA level, Luke absolutely proved his worth.

Just one season into his 4-year / $64M contract extension, Luke Kennard has silenced any and all skeptics of the deal. Many critics began labeling the contract a failure before it even started, perhaps forgetting that it did not go into effect until the beginning of this 2021-22 season. Even if the contract extension had started immediately after it was agreed upon, the criticism never made any sense, and certainly looks even worse now.

With his 44.9% clip from deep, Luke Kennard led the NBA in three-point percentage this season. Since coming to the Clippers, his 44.8% clip from deep ranks first in the NBA amongst all players who have attempted at least 600 threes during that span. As previously mentioned, Kennard went from a guy who was expected to simply knock down clean looks, to someone who was actively being chased off the line on a nightly basis by multiple defenders.

When asked about this during the season, Kennard said, “Teams have been a little more locked in, playing on my body a little bit more, so it’s been tougher.” He acknowledged that the reps he was getting would serve him well once Kawhi Leonard and Paul George returned; however, it was indeed an adjustment to face that level of defensive attention. While it unfortunately never happened during the 2021-22 season, Kennard also added that “When Kawhi, PG, and Norm get back, either I’m gonna be wide open with their playmaking abilities and how much attention they command, or I’m gonna provide space for them.”

While the eye test certainly affirms that Kennard was a focal point of opposing defenses all season long, the stats help illuminate this reality even more. As previously mentioned, Luke Kennard led the NBA in three-point percentage this season. Amongst each shooter in the top-5 of that category, Luke shot the fewest “wide open” threes per game. The NBA categorizes “wide open” threes as an attempt from deep where the nearest defender is 6 or more feet away. With just 2.2 of his 6.0 three-point attempts per game being deemed wide open, Kennard had the fewest clean looks of any player who finished top-5 in 3P% this season.

With this type of shooting prowess, it is unsurprising that the Clippers were much better when Kennard was on the floor. In the 1,919 minutes that Luke played this season, the Clippers posted a 110.0 ORTG, a 106.6 DRTG, and a +3.4 NTRG. Each of these ratings worsened significantly when Kennard was off the floor, with the team’s ORTG falling to 107.1, their DRTG spiking to 110.3, and their overall NTRG plummeting to -3.2. For those unfamiliar with team ratings, they are calculated on a per 100 possessions basis, meaning offensive rating (ORTG) is the amount of points a team is scoring per 100 possessions, defensive rating (DRTG) is the amount of points a team is allowing our 100 possessions, and net rating (NTRG) is a team’s point differential per 100 possessions. When looking at these metrics, the Clippers were significantly better in every facet of the game when Luke Kennard was on the floor.

Because of his annual salary, expect to see Luke Kennard’s name in an egregious number of hypothetical trades this offseason. With the Clippers missing the playoffs, and injury context likely to be forgotten by the summer, many will began exploring potential trades the team should make to bring in a third star. While the pursuit of improvement is always an honorable one, trading Luke Kennard is not the path to success for the Clippers. While it can certainly feel redundant to continuously hear that the Clippers will be dominant when fully healthy, that is indeed the case.

As Ty Lue and several others on the team emphasized throughout the season, it’s not just Luke’s league leading three-point shooting that makes the Clippers so much better when he’s on the floor. His mere presence is a nightmare for opposing defenses, and his improved personal defense has made teams unable to target him on the other end. While some have tried to argue that Luke is expendable because his offensive firepower does not outweigh his defensive insufficiencies, the numbers tell a different story. With the previously referenced metrics indicating that the Clippers are actually better defensively when Kennard is on the floor as opposed to when he is not, there is no merit to these claims. In fact, the duo of Luke Kennard and Paul George had the 10th best DRTG this season amongst all duos that logged at least 450 minutes together. Any argument against Luke Kennard that is predicated on his defense, is not rooted in any statistical facts.

Because what Luke Kennard provides is so unique, and cannot be replicated by anyone else on this Clippers roster, the team should now view his 4-year / $64M contract as a bargain that will allow them to pair Kawhi Leonard, Paul George, and Norman Powell alongside one of the NBA’s most lethal shooters for years to come.