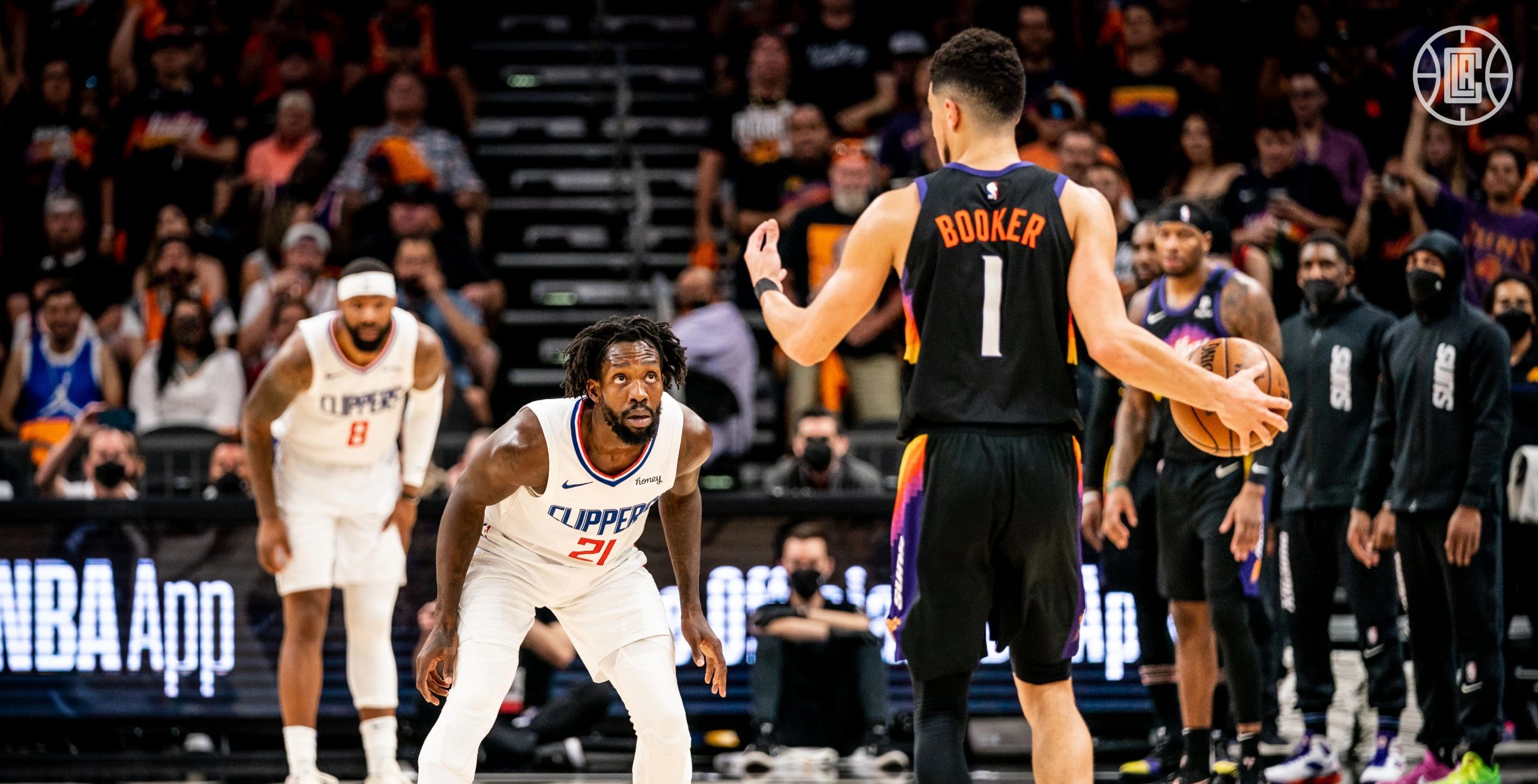 We’re continuing our 213Hoops Exit Interview series, where we go player-by-player through the Clippers’ roster and break down how each player on the team performed relative to their pre-season expectations, and ponder their future with the team. Today, we’re taking a look at the longest-tenured Clipper: point guard Patrick Beverley.

Contract Status: Beverley is entering the final year of his contract, set to make $14,320,998. While his deal no longer represents a negative for trade purposes because of additional years of owed money, he still probably doesn’t have a ton of value in most situations unless his deal is being used to make the math work in a trade where the Clippers are adding value elsewhere.

Pat entered the season with deservedly lofty expectations, but several potentially fatally flaws. Everyone knows who Pat is as a player: he’s a tenacious and masterful perimeter defender who is truly one of the best point of attack defenders in the league, pressuring the ball and navigating screens to blow up opposing offenses’ primary actions and derail entire posseessions. From his hustle, awareness, and ravenous rebounding, Bev simply makes winning plays on both ends of the floor.

But his weaknesses are also apparent. While he’s actually quite underrated as an offensive player, he has the noteworthy drawback of not providing much primary playmaking at all from the point guard position. However, as a complementary piece (with someone like James Harden or, in this case, Paul George running the offense), he is a good spot-up three point shooter and certainly capable of driving against closeouts to get to efficient floaters in the lane. Still, he’s not bringing you the isolation and pick-and-roll playmaking that guys like Lou Williams or Reggie Jackson do when they’re in the lead guard slot, and we learned this year just how much pressure that relieves from the shoulders of Paul George and Kawhi Leonard.

It’s a bit hard to evaluate whether Pat’s season was an individual success or not, because there’s really compelling evidence to point to each. In the regular season, the Clippers got almost nothing from Beverley–he was injured a few weeks into the season and ended up missing almost half of the team’s games with off-and-on injuries. When he did play, he was almost always managing or recovering from an injury, meaning low minutes and an intensity level below his usual maniacal play. His per-minute stats don’t grade out as a major decline from last season (more points, fewer assists and rebounds, more blocks, better three-point shooting, fewer turnovers), but the real problem was the amount of minutes: just 37/72 games played, and only 22.5 minutes per game. When a guy is the fourth highest-payed player on the team, the longest-tenured player on the team, an established starter, and a locker room leader, you’d really like for him to be on the floor for more than a fourth of your minutes in a given season. And you can’t blame anyone for getting hurt, but at this point the expectation that Beverley is unable to play at his best (with peak aggressiveness and physicality) over the course of a full NBA season is really just a fact that the Clippers have been forced to acknowledge.

It really felt, as this season progressed, that peak Patrick Beverley might just be gone. At 32 years old, with a long injury history and almost no healthly regular season reps heading into the playoffs, it began to feel like a lost year for Pat that would force the team to move on from him after injury also limited his availability and effectiveness in the 2020 NBA Playoffs. When the 2021 Playoffs began, he was rendered mostly ineffective against Dallas, but it wasn’t necessarily surprising–Pat is a 6’1″ All-Defensive Team-level point of attack guard defender who does just enough on offense to get by, and Dallas runs all of their offense through a big, strong 6’7″ point forward. If Pat doesn’t have someone to guard, he’s probably not going to give you much more than average impact.

But against Utah and Phoenix in the second round and Western Conference Finals, Beverley did have someone to guard–and he was brilliant in each matchup. Take a look at how effective he was against Donovan Mitchell and Devin Booker:

Beverley’s relentless hounding of Mitchell and Booker forced them into worse quality shots (in Mitchell’s case, more contested threes, in Booker’s case, fewer shots altogether) and held them to lower efficiency and offensive output. He managed to do that while putting them on the free throw line less (particularly Booker), limiting their playmaking, and crucially forcing turnovers at the point of attack, oftentimes not just stopping an offensive possession for Utah or Phoenix but also springing a counterattack from the Clippers in transition. His defensive was brilliant, with those two rounds marking one of the most elite sustained runs of play of his career, and he was absolutely essential to the Clippers’ efforts to eliminate the Jazz and then push the Phoenix Suns to six games without Kawhi Leonard, Serge Ibaka, and Ivica Zubac.

Perhaps no other Clipper benefited more from the rise of Reggie Jackson than Patrick Beverley, which is a pretty weird thing to say when Reggie pretty much stole Pat’s spot in the starting lineup. But the truth is that after last season’s bubble flameout, there was a lot of pressure on the Clippers to find a trade that would exchange Beverley for a more consistently available, well-rounded point guard who could contribute on offense as well. While no deal materialized, the Clippers would have been even more aggressive in hunting for a Beverley upgrade this summer were it not for the breakout of Jackson as the team’s starter–namely because Pat missed most of the season, and the team wouldn’t have advanced out of the second round again if Reggie wasn’t doing his thing. Now, Jackson’s emergence (even with a nice helping of regression from his spectacular playoff run) as a probable starter for next season (after helping lift the team to the WCF in that role this year) means that the team can feel more comfortable at the point guard position and embrace Beverley’s immense utility, as detailed above: as a specialist who can be protected from a starter’s minutes load all season and then used as needed in the playoffs, rather than as a core starter the team depends on night in, night out.

I feared (and feared is the right word, because Beverley is one of my favorite Clippers) at the trade deadline that his lack of availability and impact meant that Pat’s time with the team was coming to a close, and it certainly felt that way when he was benched against the Dallas Mavericks in the first round. But he proved–resoundingly–that he can still reach elite levels defensively in the later playoff rounds. If the team can re-sign Reggie Jackson in free agency this summer, I’d be very happy to have Beverley back as the backup point guard, playing (probably) alongside Terance Mann and Luke Kennard on the second unit and allowing those younger guys to take on higher workloads while Pat plays 16-20 minutes a game, staying warm, healthy, and fresh for the playoffs. If the team plays Dallas again, maybe he gets DNPs again. But if the Clippers are desperate for answers to guys like Steph Curry, Damian Lillard, Donovan Mitchell, or Devin Booker, Pat could become a crucial part of the gameplan in those series, as he did this year.

The caveat is that if Jackson leaves in free agency, I still feel like the Clippers will have a hard time justifying trusting Beverley returning to the starting lineup for a full 82-game season, especially without another reliable point guard on the roster (Mann and Kennard are both better on the wings, and neither Yogi Ferrell or Rajon Rondo are rotation-caliber players). In that case, they’d probably be back to needing to aggressively hunt for another point guard on the trade market, with Pat’s $14.3M expiring deal as the financial centerpiece of most packages.

To that point, it’s possible that Pat could be traded even if Reggie stays, just because of the utility his contract would afford in making big trades possible. It’s kind of like Moe Harkless when he was with the Clippers–regardless of how you felt about him, it was almost inevitable that he would be moved because his $11M expiring deal was really LAC’s only option for structuring a trade to bring in a guy at the trade deadline. The team has more flexibility this time around, with Rondo and Ibaka (if he opts in) also on decently-sized expiring deals, but most ambitious fake Clipper trades for the next 7 months until the 2022 trade deadline will include Pat. That’s why, despite rumors that he wants an extension (and why wouldn’t he?), it seems unlikely to me that the team will work on a long-term deal for Beverley this off-season. For an injury-prone guy with a limited game in his 30s, additonal years of guaranteed money would be enough to make his deal unappealing to potential trade partners–a major reason for LAC to punt on extension talks as well as another major reason for Beverley to push for one and try to secure his future here. The team could potentially wait for the trade deadline to pass and then, if they didn’t move Beverley, engage in extension talks rather than waiting to agree to a new contract in free agency next summer.