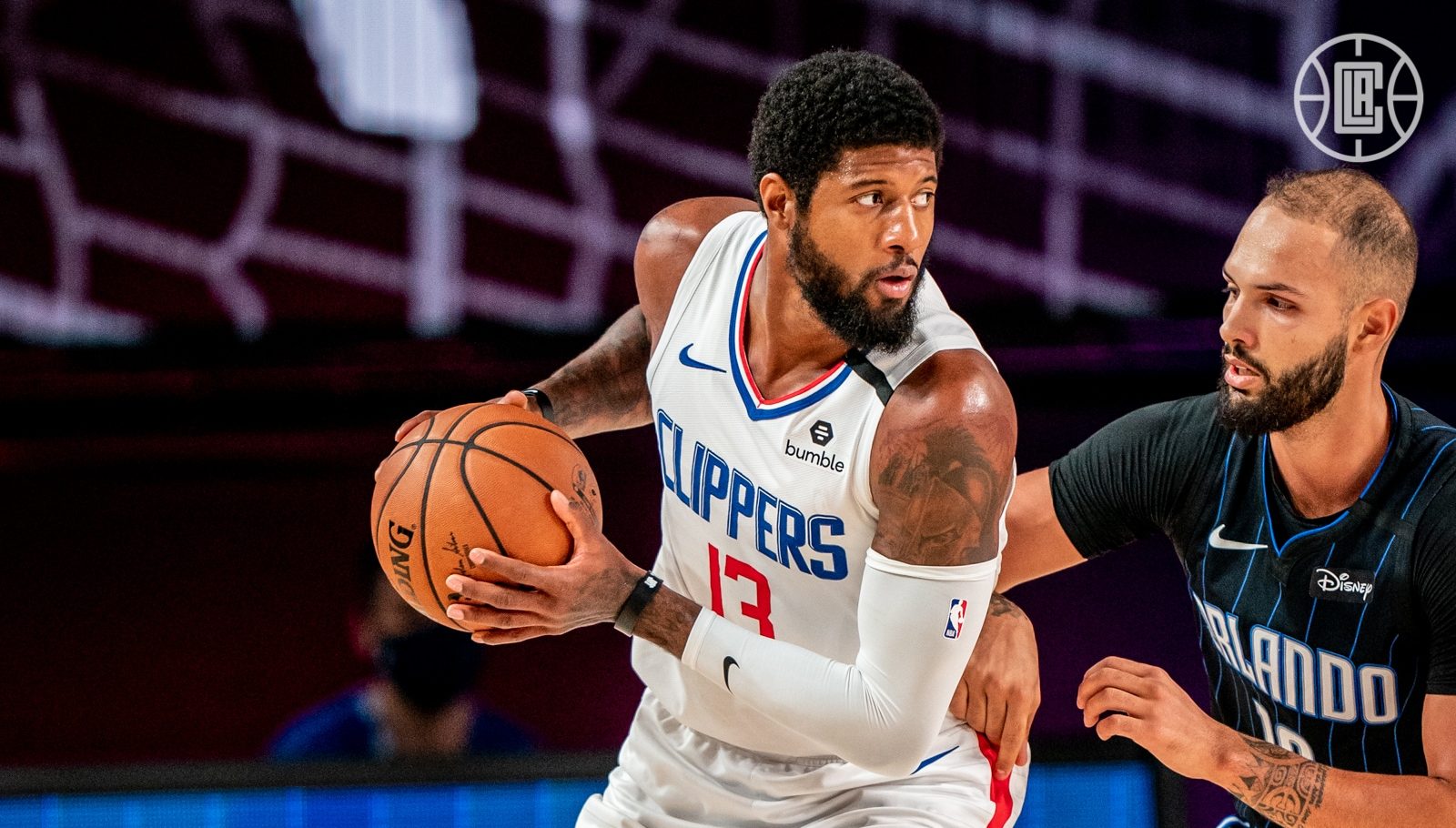 Now that the Clippers’ 2020 season has reached its disappointing end, 213Hoops will work through the roster player-by-player for our “Exit Interview” series. Today’s exit interview features superstar Paul George

Contract Status: PG is due to make $35.5M next season, with a player option for $37.9M in 2021-22. He will likely decline that option regardless of his intention to stay with the Clippers or move teams, as he is now eligible for the larger 10-year max contract.

Paul George finished 3rd in NBA MVP voting in 2019, posting tremendous averages of 28 points, 8 rebounds, and 4 assists per game. His well-rounded offensive and defensive game has been elevated as his career has gone on by the progression of a truly elite skill: high-volume, efficient three-point shooting. In the 2018-19 season, only Steph Curry shot more threes at a higher efficiency (this season, just Duncan Robinson and Davis Bertans bested George in both categories). He was All-Defense and All-NBA 1st team. There was little question what George is capable of.

If anything, expectations for George were slightly lowered coming into this season with the Clippers. Injuries accumulated late in the season forced him to have double shoulder surgery over the off-season, which the team knew would cause George to miss the start of the season and need time to round into form when he became healthy. After having by far the best year of his career in 2019 at 28 years old, every reasonable expectation was that George’s regular season statistical profile would take a step back in 2020 as he recovered from surgery and grew into a new partnership with Kawhi Leonard.

Ultimately, though George is at the level where expectations for him are inseparable from expectations for the team. The Clippers signed the reigning NBA Finals MVP, and in order to lure him, they traded possibly the biggest package in NBA history: quality starter Danilo Gallinari, high-level prospect Shai Gilgeous-Alexander, a record-setting five first-round picks, and two additional first-round pick swaps. You don’t push all your chips into the middle of the table like that just because you think a guy is a good player–you do it because you think he’s going to bring trophies to your organization. Years from now, nobody is going to remember if George averages 22 points or 28 points. We’ll remember whether or not he was part of the Clippers’ first championship team.

George’s expected step back in regular season production played even a little more than expected, thanks to an hamstring injury suffered in January. After missing the team’s first 11 games due to his shoulder recovery and rounding into form during the second half of November and into December, George missed 10 games in January due to his hamstring. As a result, his regular season was choppy and caused him (and his teammates) difficulty getting in rythm: he missed the first three weeks of the season, then played for about two months before getting hurt again, and then returned for five weeks before the season was suspended due to COVID.

All in all, his drop-off in production was largely just a question of volume. George not only played in just 48 regular-season games for the Clippers, but averaged only 29.6 minutes in those appearances. When adjusted based on minutes or pace, his statistical profile is remarkably similar to his 2019 campaign in Oklahoma City. That’s perhaps an encouraging sign for 2020, suggesting that if he returns to 70+ games (with the exception of his rookie season and his horrific leg injury in the 2014-15 season, PG averaged 3 missed games per year coming into last season) and 36 minutes per game he will have a much bigger impact on the Clippers’ next campaign than their last. The most concerning number for PG this year? Free throw rate. In 2020, he averaged just .277 free throw attempts per field goal attempt, a significant decrease from .335 the year before.

When it came to the playoffs, George’s struggles were far more impactful than the aforementioned regular-season drop-off. But I would argue that much of the to-do about “Playoff P” are just cheap-shot memes and lazy narratives. Yes, he struggled in the playoffs, most notoriously in games 2, 3, and 4 against the Dallas Mavericks while struggling with depression, describing himself as being “in a dark place.” If you set aside those three performances as clear outliers influenced by outside factors, his playoff production in his other 10 games is much more respectable: 78-174 (44.8%) from the field, 33-86 (38.4%) from deep, and averages of 22.9 points, 5.2 rebounds, and 3.7 assists per game. Against Denver, I would argue that George was the Clippers’ best player through 7 games, including an iconic 32-point, 4-rebound, 4-assist performance while also absolutely smothering Jamal Murray in a crucial game 3 win.

That doesn’t mean he’s beyond criticism, though He also had some bad games, particularly game 7 against Denver. He definitely made some mistakes, like racking up fouls and forcing the Clippers to adjust their rotations. Scoring efficiently outside of his 3-game slump doesn’t excuse the lower volume–22.9 points per game isn’t enough. His postgame press conferences often mirrored the team’s on-court lack of urgency as the Clippers’ hopes crumbled, from his assertion after game 6 against Denver that the team was still in the driver’s seat to his claim after game 7 that this was never a championship-or-bust season.

As I wrote above, it’s impossible to separate the expectations and reality of Paul George vs the expectations and reality of the Clippers’ season. He’s too integral to the team’s on-court product and the franchise invested too much into him for that to not be the case. The Clippers failed this year–not only to win a title, but to even meet the most baseline expectation of a conference finals appearance–and that means that Paul George failed. Not realizing that, at least immediately in his postgame press conference after the team was eliminated, is far more concerning than the phantom “Playoff P” concerns that didn’t really exist outside of that 3-game slump against Dallas. Hopefully the firing of Doc Rivers sent the message that this loss wasn’t acceptable to the organization, and the new coach will instill a bit more urgency in the team next year.

Despite some rowdy fans calling for George to be traded, it’s incredibly unlikely. As I just outlined, he wasn’t nearly as bad this season or this playoffs as the twitter memes and talk show overreactions would have you believe–poorly-timed injuries caused lower regular-season volume on similar overall numbers, and he was perfectly fine in the playoffs outside of a 3-game window where he was struggling with his mental health.

There are very, very few players in the NBA who are better than Paul George, and the prospect of the Clippers landing one of them via trade this off-season is exceedingly unlikely. Hypothetical deals for Bradley Beal, Zach LaVine, or some collection of role players would make this Clippers team significantly worse. LAC trading George now would be the ultimate buy-high, sell-low move, and it would make them a laughingstock yet again when he inevitably had a bounce-back year with full health next season and was an All-NBA player again.

The real question for George lies next summer. With George and Leonard both having the ability to exercise their player option and hit free agency, this Clippers core could evaporate as suddenly as it came together–or the two could each re-up on long-term deals that would keep them in red, white, and blue through the opening of the team’s new arena in 2024 and beyond. Only time will tell. For now, it’s in the best interests of all parties to focus on the year in front of them and try to correct 2020’s mistakes to push for a title in 2021.