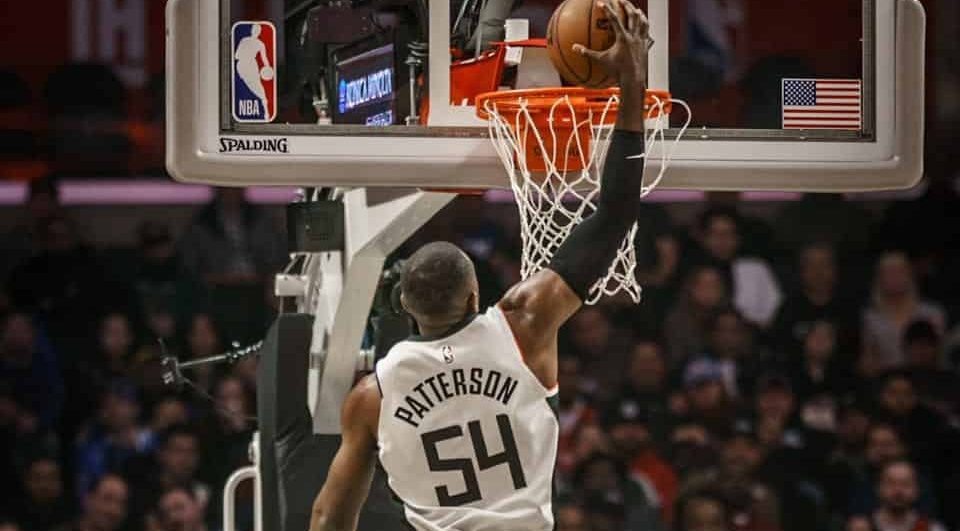 Now that the Clippers’ 2020 season has reached its disappointing end, 213Hoops will work through the roster player-by-player for our “Exit Interview” series. Today’s exit interview features shooter Patrick Patterson.

Key Stats: Made 59 appearances and 18 starts for the Clippers, averaging 4.9 points and 2.6 rebounds in 13.2 minutes per game. Shot 39% from three on 2.9 attempts per game. Played just 9:43 of garbage time across two appearances in the playoffs.

Contract Status: Unrestricted free agent coming off of a one-year veteran’s minimum contract worth $2.3M. The Clippers will have non-bird rights on Patterson, which means that they can pay him up to 120% of the minimum salary for a 10-year veteran–roughly $3.1M. This contract can run up to 4 years and carry maximum raises of 5%.

Patterson came to the Clippers looking to rebuild his value after a dismal two-year run in Oklahoma City that ended with him playing himself out of the rotation at the end of the 2019 season. After being a quality rotation piece for the Toronto Raptors in his mid-20s as a versatile and dependable defender and solid shooting power forward, Patterson found himself being waived by the Thunder last summer and looking simply for an opportunity to play on a roster.

For a Clippers team that featured returned big men Ivica Zubac and Montrezl Harrell, re-signed JaMychal Green after a big 2019 playoff performance, and added forwards Kawhi Leonard and Moe Harkless, there didn’t seem to be a real spot in the rotation for Patterson. But, joining former Thunder teammate and good friend Paul George, Patterson figured to provide the Clippers with a little more trustworthy depth than rookie big man Mfiondu Kabengele and two-way center Johnathan Motley.

The Clippers’ arrangement with Patterson ended up working out well for both parties, as various combinations of injuries, load management, and match-ups over the course of the season resulted in the Clippers looking to Patterson regularly, for almost 800 regular-season minutes. He started 18 games, including the first 11 of the season, and played 12 or more minutes 34 times. While he wasn’t one of the Clippers’ rotation players when the team was fully healthy, he gave them quality minutes when they weren’t.

While being solid defensively and on the glass, Patterson’s primary contribution was his high-volume, high-efficiency three-point shooting. He was one of just fifteen players in the NBA to shoot 39% or better on 10.5 or more attempts per 100 possessions in the regular season, and that shooting helped the Clippers’ spacing throughout the year.

The acquisition of Marcus Morris, along with the team’s tightening playoff rotation, squeezed Patterson’s minutes as the year wore on and the team entered the Orlando bubble. Morris and Green are both better all-around players than Patterson, with each bringing more defensively than Patrick at this stage in his career and Morris having the ability to create his own shot while Green is a very good rebounder as a smaller center. On the shooting front, neither quite reached Patterson’s output but are comparable: Green shot 38.7% from deep on 8.6 attempts per 100 possessions this year, while Morris shot 40.8% on 8.7.

With most of the Clippers’ supporting cast struggling from deep in the team’s second-round loss to the Denver Nuggets, I thought that Rivers could have tried Patterson in spurts later in the series to provide spacing–but the fact that he never played after garbage time in game 1 suggests that Rivers never considered him an option.

All in all, Patterson did everything that can be asked of a minimum-salary depth veteran and played better than any fair expectation could have asked for.

That performance might be just the reason why he isn’t back with the Clippers next season. While Patterson isn’t a candidate for a big contract or starting role anywhere in the league, he certainly seems to have played well enough to earn a look from any team that could use a floor-spacing big on their second unit.

With Patterson’s non-bird rights, the Clippers can offer him a contract starting at just under $3.1M. It’s unlikely that other teams will offer Patterson much more than that–in fact, it could end up being his only above-minimum offer–but what the Clippers can’t offer him is minutes. At 31 years old, it would make sense for Patterson to try and leverage his performance last year into a bigger role on a one-year deal for another team this year and potentially attempt to earn one more real NBA contract next off-season. If he comes back to LA, he’ll spend a lot of time on the bench again, limiting his ability to build his value.

But if he can be convinced to return, it would be great for both the Clippers’ depth and continuity. Patterson gives Rivers a stylistically consistent replacement for Morris or Green at PF, which could come into play if either is injured but also if they slide to other positions. Morris is comfortable at either forward position, and could see occasional time at SF next season when Leonard misses back-to-backs for load management or even find regular second-unit minutes bringing his offensive punch when the starters are out. Green, on the other hand, slides to center at times and could feature there throughout the year either to provide injury depth or as a situational option depending on who the team’s backup center is going into next season.

Veteran’s minimum contracts benefit teams because a portion of the player’s salary is reimbursed by the league. This means that the Clippers would only be on the hook for $1.6M of Patterson’s $2.6M, saving not only some cash but helping them navigate the luxury tax threshold and hard cap apron, both of which could come into play this off-season. And just as teams can always exceed the cap to sign a minimum-salary player, they can also always add a minimum-salary player via trade–meaning that if the Clippers need help facilitating at next year’s deadline, Patterson’s minimum-salary deal would count as outgoing salary for LAC but not incoming salary for their trade partner.

But in any trade the Clippers make at the deadline, they’re more likely to be piecing together salary to bring in a larger contract. That means that the bigger salary for Patterson would provide more filler in a deal, so paying him more could actually be better for the team. If he doesn’t bolt for more money or a better role elsewhere, it would be great for the Clippers to have him back on the bench next season.