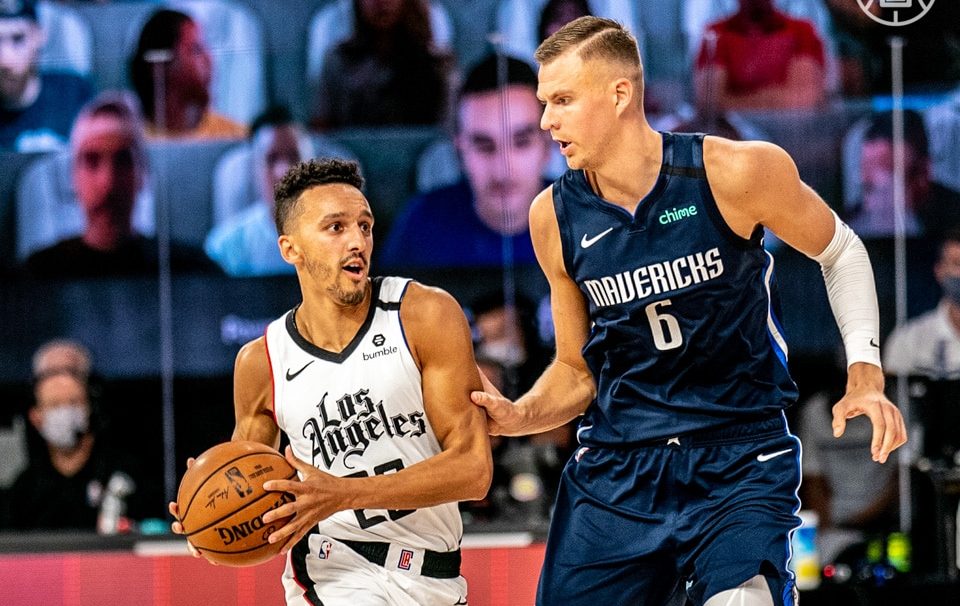 Now that the Clippers’ 2020 season has reached its disappointing end, 213Hoops will work through the roster player-by-player for our “Exit Interview” series. Today’s exit interview features sharpshooter Landry Shamet.

Contract Status: After finishing the second year of his inexpensive rookie contract, Landry will make just over $2 million next season. He has a team option worth about $3.75 million for the 2021-22 season, which the Clippers will have to make a decision on (they will certainly accept it) before next season begins. Then the summer of 2022, he will be a restricted free agent with a qualifying offer of $5.5 million, meaning the Clippers would have the right of first refusal on any contract Shamet agrees to with another team. His production, inexpensive deal, long-term team control, and youth and potential make him a valuable asset for the Clippers to either develop or trade.

After a truly stellar rookie season that saw Shamet–first drafted by Philadelphia–excel enough as the 19th overall pick to become the centerpiece of a trade for Tobias Harris and then start for the Clippers upon his arrival, it’s safe to say expectations were high for the sharpshooter in his sophomore campaign. In a short post-deadline stint for LA as a rookie, he moved cleverly without the ball in a way that could only remind fans of former Clipper J.J. Redick, and he was lethally efficient, making 45% of his triples on over 10 attempts per 100 possessions. Defensively, he was unspectacular but solid, a rarity among rookie guards.

Entering the off-season, the 22-year-old looked like the kind of player who could be a start for the team for the next decade, particularly because of his extremely friendly rookie contract paying him less than $2M a year.

Changes above Shamet’s pay grade altered that plan. After all, when you can play two positions and your team acquires a player from the prior season’s All-NBA 1st team at one and the reigning NBA Finals MVP at the other, it’s going to change your role a bit. Still, Landry was going to have his opportunities to be a big contributor to a contending team, and faith was high in his ability to come through. Paul George would miss the opening weeks of the season as he recovered from double shoulder surgery. Kawhi Leonard wouldn’t play in back-to-backs as he managed a persistent quad injury. And even in the biggest games when both were playing, the team would use Shamet as their main wing option off the bench when George and Leonard sat–not to mention the widespread assumption that the team’s best lineup would ultimately be a smaller one with Shamet, George, and Leonard playing together at the 2, 3, and 4.

In a bizarre and disappointing season, perhaps no Clipper faced more disappointment than Landry. A starter last year, it was of course understandable that he would be demoted this season, but would get his chances as a starter in the early weeks as George recovered from surgery. That made a pre-season wrist injury all the more excruciating. Shamet would play though it, but it would clearly hurt his shot as he hit just 39% from the field and 36% from deep in his first ten games before being forced out of the lineup with an ankle injury.

After missing 17 games with that ankle sprain, Shamet returned to the lineup with an inconsistent role. In the 37 games between his return and the season’s suspension due to the COVID-19 pandemic, Landry would see 17 starts at different positions, with his minutes dipping as low as the teens and skyrocketing as high as the 40s depending on who else was available. When Reggie Jackson joined the team after the trade deadline, Landry’s minutes faced an even stronger squeeze, dipping into the teens multiple games at a time and even falling as low as 8 minutes played in the team’s big March match-up against the Lakers.

Things didn’t stabilize much in the bubble. Landry tested positive for COVID in July and was delayed in arriving to the bubble, missing the team’s Orlando training camp and starting the team’s seeding games with a minutes restriction. He moved in to the starting lineup in the team’s fourth, fifth, and sixth seeding games–each at a different position in place of Patrick Beverley, then Paul George, then Kawhi Leonard. Then, he missed the last two seeding games with a foot strain and came into the playoffs behind Reggie Jackson in the rotation… until Jackson’s underwhelming play in place of the injured Beverley caused Doc Rivers to turn to Landry Shamet at point guard, a position he had rarely played in the playoffs. He thrived in the role, starting in games 3-6, and then was immediately demoted upon Beverley’s return in the second round and saw scarce minutes as a backup.

One can hardly blame Landry for falling short of expectations considering the circumstances–repeated injuries with inconvenient timing, an inconsistent role that thrust him into multiple positions as a starter and backup with drastically varying minutes, and an unimaginative offensive scheme that removed many of the actions that generated good looks for him last season.

Despite an underwhelming sophomore campaign, there’s little doubt how important Landry is to the Clippers. Despite Lawrence Frank’s optimistic remark about how many under-30 players the team has, the reality is that most of them are 29 years, and Shamet and Zubac at 23 years old are the team’s only actual young players who have proven that they’re capable of playing in the NBA.

For a team that won’t control their own first-round draft pick until 2027, that–and hitting on second-round selections–means a whole lot in terms of long-term team building. On the one hand, Landry is crucial to the team as their only young guard, in tandem with 32-year-old Patrick Beverley and 34-year-old Lou Williams. If George and Leonard choose to stay in LA after their free agencies next summer, Landry is one of the few role players who won’t eventually need to be replaced around them. If those two depart, he’ll be one of the team’s best building blocks going forward.

On the other hand, if the Clippers do want to make any kind of short-term upgrade to their roster for next season, Shamet will also likely have an important role to play. While the team would hate to part with him for the reasons discussed above, their lack of first-round picks to trade means he’s their best trade chip, even after a disappointing year.

Just like last summer, Landry’s fate is going to be determined by transactions (or lack thereof) above his paygrade. We’ll just have to wait and see.