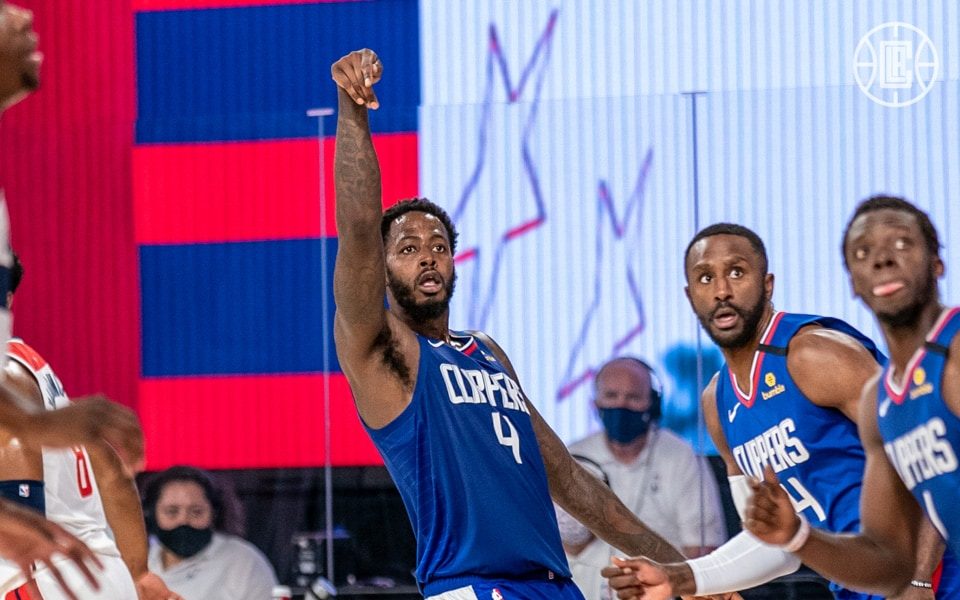 Are you a Clippers fan who isn’t sure who to root for in the NBA’s August 1st bubble games? You’re in the right place.

With each team playing just eight “seeding games” in Orlando before the playoffs begin, there’s limited time to both battle for playoff positioning as well as build momentum after a four-month layoff. That means that, while we obviously want the Clippers to be successful, nearly every game played in the NBA over the next two weeks is important to the playoff picture.

They’ve also lived up to that billing–after Thursday’s opening night doubleheader featured two one-possession games decided in the closing seconds, Friday’s lineup featured a number of high-quality games, including two overtime contests. If the 22 teams involved in bubble play keep up this level of intensity, it will be a really wonderful two weeks of basketball.

The Denver Nuggets currently sit at third in the West, just a game behind the Clippers (and with one more game left to play). The Clippers are one ahead in the loss column–but the teams have a head-to-head game in their 7th seeding contest, and if they finish tied, the Nuggets will move ahead due to their extra win from an additional regular-season game played before the season was suspended.

The Clippers falling to third wouldn’t be a disaster in the second round, as Denver vs LA on a neutral court is the same regardless of seeding. But with Utah, Houston, and Oklahoma City jostling for the 4-6 spots, third place will get a more challenging first-round opponent than 7th-place Dallas. And if the Nuggets pass the Clippers and one of those other teams surges, LA could find themselves in fourth place–a nightmare scenario that would see them facing the Lakers in the second round, not the Western Conference finals.

So, our love for Nikola Jokic and the fantastic local coverage team at DNVR aside, Nuggets losses are good for the Clippers (at least until we get to the point where the Clippers are safe at 2nd and the Nuggets are potentially sliding to 4th).

Bonus: Boston’s loss Friday, plus a Miami win here, puts the 3rd seed in the East squarely in play for Tuesday’s matchup between the two teams. Boston in the 2nd round followed by Toronto in the ECF is likely the Milwaukee Bucks’ toughest path to the Finals, which if nothing else could help the Clippers by tiring the Bucks out.

But these two teams are battling with each other and the Houston Rockets for 4th, 5th, and 6th in the West. The Clippers want the Rockets to finish in the 4-5, setting them up for a second-round series with the Lakers. Since OKC is currently in 6th and Utah is currently in 4th, it’s a no-brainer to root for the result that further entrenches the Utah-Houston-OKC order, instead of the one that brings all three within half a game of each other.

The Clippers, however, need to take care of their own business, as Utah is just two losses behind them currently. Speaking of…

Rooting for: who do you think?

None of the NBA’s August 1st bubble games are more important for the Clippers than their own–wins allow them to hold on to 2nd and watch what happens around the league from afar. A loss here and a Denver win would mean the Clippers no longer control their own destiny for the 2-seed.

First of all, this should be a really fun game between two teams that have a drastic talent disparity despite being tied in the standings. It is an embarrassment of riches to have the NBA’s August 1st bubble games be so stacked that they’re showing four games on national TV tomorrow, and this isn’t one of them.

These teams are competing for the 5th and 6th seed in the East. They’re unlikely (but not impossible) to climb to 4th, and neither will fall to 7th. Right now, I honestly have no idea who we’d prefer to earn the 5th seed and potentially take on the Milwaukee Bucks in the second round. My gut and head say Philly, simply because of their superior talent and the fact that they were just one bounce from beating the Raptors last year.

But they’re so dysfunctional that I just need to see more from them in the bubble before I buy into them as a legitimate challenger to Milwaukee. So, while I may change course as the playoffs approach and hope to see the Sixers battling the Bucks in the second round, today I’ll gladly support the cohesive, less-heralded, underdog Indiana Pacers.

This is the marquee matchup of the NBA’s August 1st bubble games, but might not have the same intensity of the others. Both of these teams–the Lakers at first in the West, the Raptors at second in the East–have virtually no chance of changing seeds in the next two weeks. So, with that established, it would be nice if the Lakers could lose a few seeding games and head in to the playoffs with a bit of struggle and uncertainty instead of major momentum.

We were rooting for: Orlando Magic

The more Brooklyn loses, the more likely we are to get a play-in game for the 8th spot in the East between them and Washington. That doesn’t matter to the Clippers, but it makes for more fun viewing. But make no mistake–all three of these lower-level East teams are awful. The league would be better if they let West lottery teams take over the last 2 spots in the East.

We were rooting for: Portland Trail Blazers

Wow–this was a really fantastic game to watch. Portland’s win helps the Blazers (my current preferred 8th seed) stay in 9th to be Memphis’ play-in challenger, and the Grizzlies loss keeps them closer to the pack.

One note: Portland played a tight 8-man rotation, with 2 7-footers (out of Zach Collins, Hassan Whiteside, and Jusuf Nurkic) on the floor for most of the game, and Carmelo Anthony, Mario Hezonja, and Gary Trent, Jr. splitting the small forward minutes. All three of those guys played well out of position at the 3. We’ll see if that’s sustainable.

We were rooting for: Washington Wizards

The Wizards were long shots to win this game (as with any game), but we need them to steal a few wins in order to get close enough to trigger the play-in game in the East. They play Brooklyn next, which is a must-win. Phoenix’s win here keeps them technically alive in the playoff hunt, but they need to win a lot of games with a difficult schedule ahead.

We were rooting for: Milwaukee Bucks

Man, this was another really high-quality game between two great teams. We like Boston’s loss for the same reason we want Miami to win–the Celtics falling to 4th gives the Bucks their most difficult possible second-round opponent.

We were rooting for: Sacramento Kings

The Kings are a more intriguing team, but the Spurs’ win puts them in 10th place, just half a game back of the Trail Blazers (the Kings are 12th, but just one full game back). I had a nightmarish vision of the Spurs out-executing teams in the bubble, earning the 8-seed, and getting run off the floor by 20 points a game in a first-round sweep to the Lakers. Please, basketball gods, give us someone with more talent and firepower.

We were rooting for: Houston Rockets

This was a really exciting game to cap off a brilliant day of basketball. The Rockets’ win leaves them in 5th, a game behind the Jazz and a half-game ahead of the Thunder. While we want to avoid the Rockets getting too hot and surging into the top 3, we won’t worry about that until they get enough separation from OKC to feel comfortable in the top 5.

Stay tuned in to 213Hoops every day of the NBA’s Orlando Bubble for a new Rooting Interests, letting you know who Clippers fans should root for in each of the day’s games.