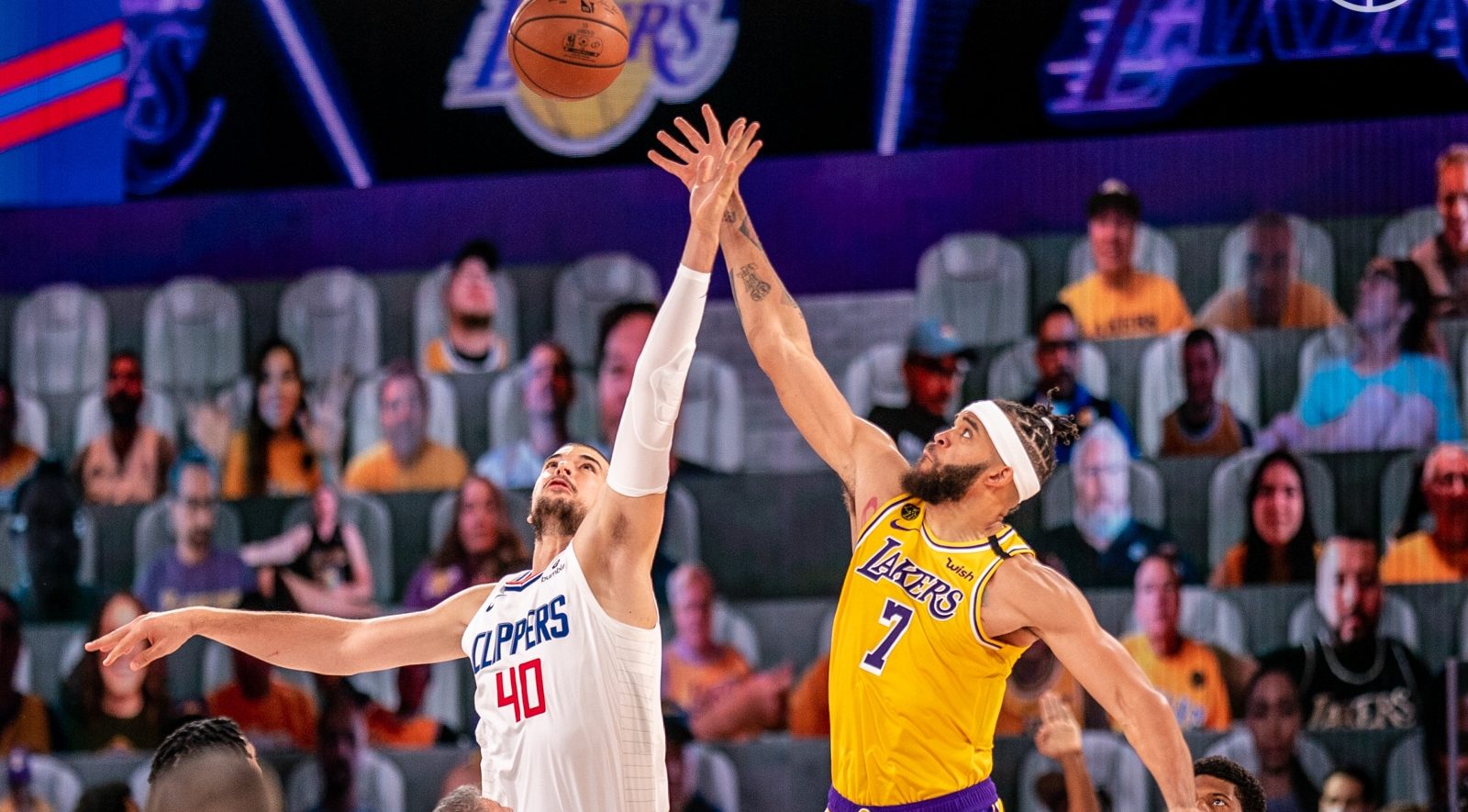 While other moves are possible, there’s little doubt that the Clippers’ most anticipated free agency move is using the MLE to sign one of their top center targets. After the disastrous performances of Montrezl Harrell in the NBA playoffs each of the last two seasons, it’s clear that a team with serious championship aspirations needs a more dependable second option at center.

In some scenarios, the Clippers could choose to use the mid-level exception elsewhere and target a center with the smaller bi-annual exception (worth $3.6M, and triggering the $138M hard cap) or a minimum-salary deal. That scenario becomes significantly more likely if the team makes a depth-depleting trade for an upgraded starting point guard, leaving them with perhaps a more urgent hole to fill on the perimeter than in the lane. Because that means the team’s targets exist across a wide range of price points–and unlike with wings and forwards, the Clippers are guaranteed to add 1 (and maybe even 2) bigs this off-season–I’ve split the bigs into two posts, roughly placing the more valuable free agents in today’s post and the lower-valued depth pieces in tomorrow’s. Those categories are loose, though, and it’s entirely possible that the top names from tomorrow’s list get above-minimum deals while some names from today’s list could end up signing for the minimum.

As I’ve done throughout this series, I broke the centers we’ll be looking at today into categories based on archetype rather than a strict ranking. Players below are listed with their predicted starting salary from ESPN’s Bobby Marks and a statistical projection of their three-year value from Jacob Goldstein’s PIPM Player Projection on WinsAdded.com (for very old veterans I might do a one-year projection). If I disagree with these assessments, I might make note of it.

Out Of Reach For The MLE

Before we talk about guys who the Clippers might get with their MLE, here are a few guys whose names will be mentioned that are likely going to end up out of LAC’s reach.

Whatever your opinions are of Olynyk and Drummond, neither are going to get more than their massive player options on the open market, so they’ll opt to try their luck next summer instead. Poeltl is restricted in San Antonio and I’d imagine the Spurs would be happy to match an MLE deal for their young center. Ibaka and Wood are the trickier ones to gauge. Serge is a guy who teams would love to have at the MLE, but he’s already in a good situation on a good team in Toronto, and the Raptors might offer him an enormous one-year deal to preserve their 2021 flexibility. It’s hard to turn down $20M in one year for an MLE deal that tops out at 4 years, $40M. Wood had a breakout year last year and should be due for an 8-figure payday, whether with the Pistons or elsewhere.

With JaMychal Green, the Clippers already have the flexibility to play a 5-out lineup with dual shooters at power forward and center. But it can never hurt to have another shooter, especially one with size that would allow the Clippers to space the floor offensively without sacrificing their ability to keep a 7-footer on the floor. A shooting big would particularly make sense if the team rounds out their rotation with a minimum-salary, defensive-minded perimeter backup who isn’t much of a shooter, like Michael Carter-Williams or Solomon Hill.

Baynes (turning 34 in December) and Gasol (turning 36 in January) both bring risk here due to their age. Gasol in particular slowed down severely for the Raptors last season, and despite his smart passing and three-point shooting his mobility issues could keep him off the floor in some playoff matchups. Baynes is still playing at the highest level of his career, but he’s been injury prone and doesn’t have a consistent track record as a shooter.

Leonard is a high-efficiency shooter, but he just doesn’t take enough threes to make up for a pedestrian all-around game. I think he’s playable in a regular-season role, but he’s typically been benched when rotations tightened in the playoffs, making him a disappointing settle at even the taxpayer MLE. Kaminsky has become solid after a slow start to his career as a top-10 pick, but inconsistent shooting and availability coupled with the Suns’ likelihood of keeping him as a cheap restricted free agent mean he’s probably not a serious option for the Clippers. If Phoenix has to rescind his qualifying offer to make other free agency moves, an unrestricted Kaminsky belongs on the Clippers’ list but not near the top of it.

As attractive as a three-point shooting stretch center would be for the Clippers, it might just be best to keep it simple: play good defense, get defensive rebounds, finish around the rim.

All three of these players are not only plus defenders, but they’re slightly undersized at center in a way that is useful in the modern game. It can be bit limiting for both of a team’s centers to be traditional, slow-footed players like Ivica Zubac, and all three of these guys are more mobile and athletic. Thompson, in particular, is capable of defending perimeter actions and switching onto guards. He won a championship in Cleveland playing that style of defense under Clippers head coach Ty Lue, and is probably the best option available to the Clippers if the players in the “out of reach” tier really are.

I’m not particularly committed to this archetype, but I think in this year’s free agent class these just happen to be the guys who I am most fond of. I think any of these three would be an excellent addition to the Clippers’ rotation, with Thompson a good step ahead of the others.

These guys are the more run-of-the-mill interior 7-footers that have, to an extent, been cast aside in the modern NBA. But that presents a market inefficiency where a player can add significantly more on-court value for your team than their market value in free agency–it was certainly true for McGee and Howard on cheap deals with the Lakers last year. Just look at how the metrics grade these guy’s impacts compared to the expert projections.

I really, really don’t like Hassan Whiteside, whose box score numbers have always drastically overstated his ability. If you shake the 20M+ contract he’s been on in recent years and sign him to the taxpayer MLE, you’re probably investing little enough in him that it’s worth it, but I think he’ll try to see if he can find a starting gig somewhere in the NBA rather than accepting a bench role on a contender. Len had a tricky season last year, but he should be a solid backup when he’s in a consistent role. Plus, his 2019 numbers–36.3% from deep on 2.6 attempts per game–indicate that there might be floor-stretching potential there that is on par with the likes of Kaminsky.

The two Lakers both made positive impacts for the defending champs in different ways. McGee gave the team quality regular-season minutes, bringing rim protection, rebounding, and lob finishing as a consistent positive contributor. In the playoffs, though, his utility severely declined to a scarcely-used role against Houston and Denver, and not a second of playing time against Miami. His $4.2M player option is probably a coin flip–I wouldn’t be excited about him at the mMLE but he’s guaranteed to get at least a minimum deal worth $2.6M this summer, so opting out in search of some long-term security (like re-signing for 3 years and $12 million) could make sense.

Howard wasn’t as good over the course of the season as McGee as a rim protector or rebounder, but he has transformed from an All-Star to a bruiser/enforcer type. As obnoxious as he is on and off the court, his instigator act worked in the playoffs and he had success frustrating Nikola Jokic and baiting him into fouls in scuffles. He still only saw situational usage, barely playing against Houston and playing fluctuating minutes against the Heat based on their lineups, but he’d be an intriguing fit as a strong backup center who would give the team another option on a Jokic-type big while perhaps falling out of the playoff rotation for JaMychal Green against smaller teams.