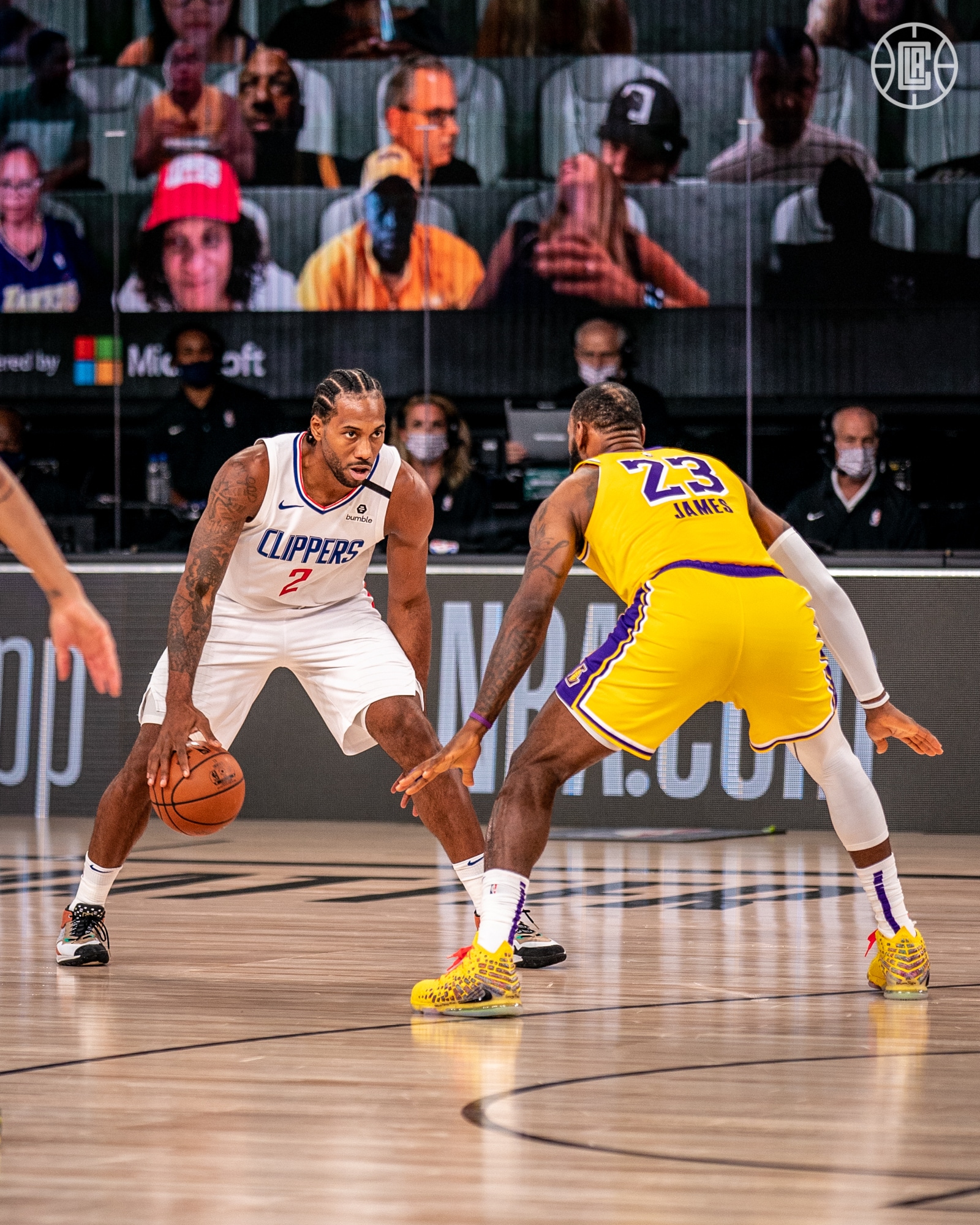 Unfortunately, we don’t get to celebrate with the Orlando bubble’s first game recap: Lebron and the Los Angeles Lakers beat the LA Clippers in the clutch tonight, 103-101. The Clippers had too many fouls, too many turnovers, and too few fit players. A sweet-shooting second half nearly brought them back anyway. LeBron James just wouldn’t have it.

It was fun, because basketball is back. Then it was not fun, because the referees had to come back too. Then the teams adjusted and found their legs and suddenly we had something that resembled basketball as we remembered it, and by the end we’d been served one hell of an appetizer, even if the last serving went the other guy’s way.

The Clippers don’t yet have everybody back, and not everybody who is back looks like their old self, but there were enough tastes of 2020-vintage Clippers basketball to fight a highly motivated Lakers squad into the final seconds of a 103-101 loss.

It was LeBron James, because it’s so often LeBron James against so many opponents, who slayed them in the end. LeBron shook off the night’s struggles (16/11/7 but with five turnovers and six-for-19 shooting) to follow up his own miss for the go-ahead basket with 12.8 seconds remaining (and four Clippers watching). Then LeBron turned around and shaded Kawhi Leonard until he surrendered the ball to Paul George, who couldn’t match his three-point heroics from less than a half-minute earlier. George looked for a foul, because 57 fouls had already come, so what a difference the 58th might have made.

Oh, you want to hear about the 57 fouls? No, you really don’t. But I’ll tell you that they came early and often and kept a lot of good players off the floor. Kawhi left the first quarter early with two fouls. So did Ivica Zubac. So did Patrick Beverley, in his first bubble action.

George, Zubac, Beverley, and Marcus Morris Sr. all drew their third fouls in the second quarter, many of them quickly. They each drew a fourth foul in the third quarter. Zubac got his within two minutes of the post-half tip. Paul George got his after tarring the Lakers with threes in what was shaping up to be his star quarter. In the fourth quarter, the referees called a lane violation, just for the practice I assume.

To be magnanimous toward the opponent, the whistles weren’t only blown in the good guys’ direction. 27 fouls went the Lakers’ way, with Dwight Howard earning five in only 13 minutes of action.

With fouls overflowing, the contest found little rhythm in the first half. The Clippers and Lakers combined for 34 free-throw attempts and just seven-for-30 deep shooting, and 24 minutes of gametime took nearly 90 minutes of my lifetime. Few shined beyond Kawhi (19 of his 28 points) and Anthony Davis (20 points and 12-13 free throws on his way to a game-high 34). Reggie Jackson added 10 first-half points as a starter before conspicuously struggling at both ends in the second half.

As alluded to, Paul George began the second half with a deft touch, and after Kawhi had erased most of the Lakers’ early lead with a domineering second quarter, the third looked like it was George’s to name until his critical fourth foul. But heavy damage had already been inflicted, and with the Lakers’ offense cratering, they fell behind on a Clippers 14-1 run before resurrecting themselves with a 9-1 counter run. Anthony Davis started hitting threes, as did the Clippers (7-11 in the quarter), and like that the game was surging.

The fourth quarter began with the tide flowing purple and gold. The Lakers ravaged a handcuffed Clipper second-unit for a 15-3 run. With key contributors Lou Williams and Montrezl Harrell only recently returned to isolation in the bubble, key returnees Beverley and Landry Shamet short of total game fitness, and key starters in foul trouble, Amir Coffey joined Reggie Jackson in a toothless lineup that provided little at either end.

Doc Rivers eventually returned his stars to the floor, and with a quietly effective JaMychal Green hitting key threes, the Clippers clawed their way back to level and then some, trading for the lead multiple times before the key sequences detailed above. It wasn’t enough to win, as LeBron and the Lakers ultimately beat the Clippers, but it was finally exciting, and if these two teams complete their heavily-predicted journeys to the conference finals, we may well be treated to seven more.