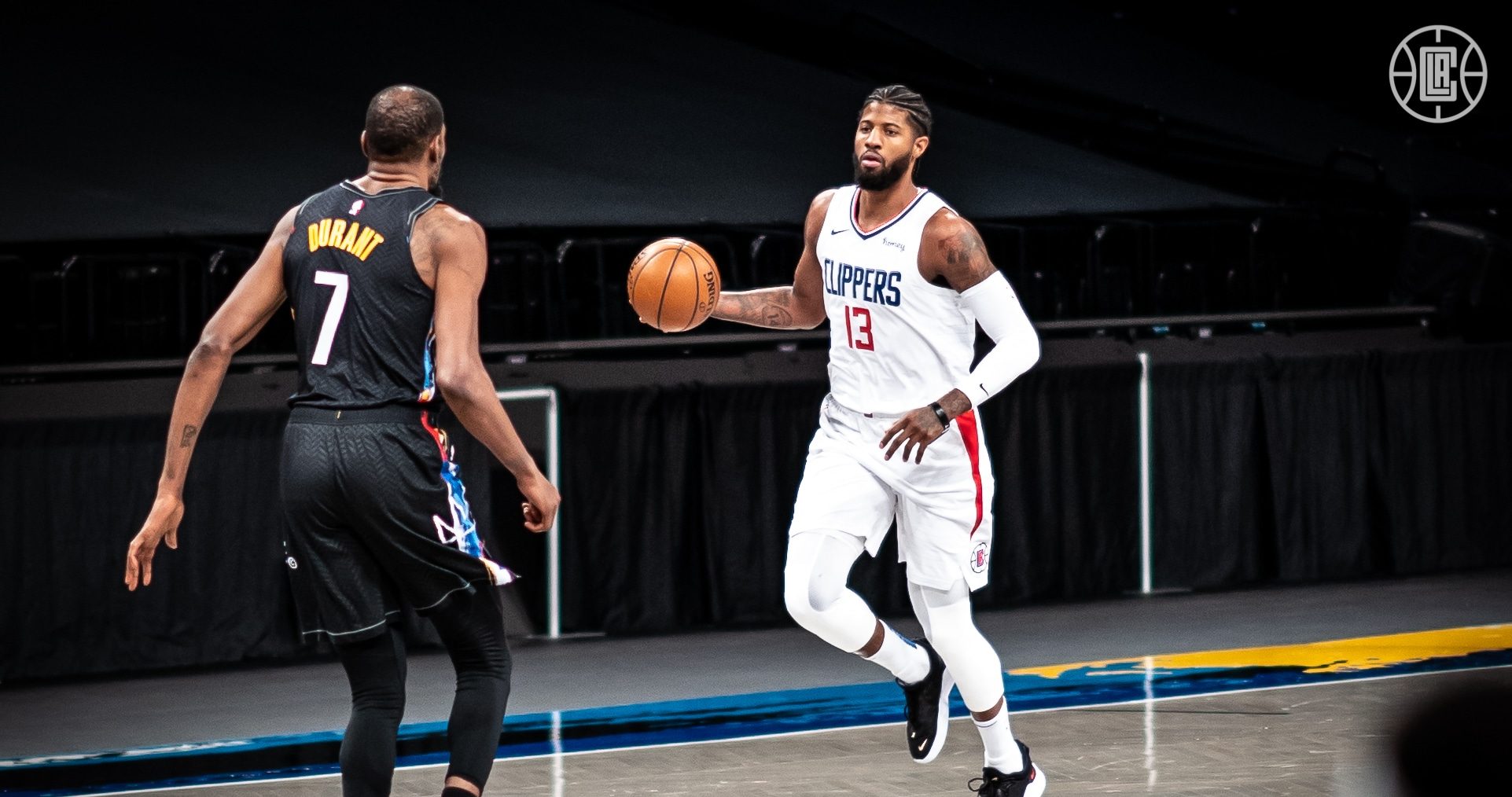 In one of the more memorable regular season games you’ll see, the Clippers fell to the Brooklyn Nets by a narrow 124-120 margin. Check out our Clippers vs Nets player grades to see how everyone did in the loss.

Reggie Jackson: C+. While I’ve started giving Reggie the respect of adjusting his grading curve based on his great performances as of late, I still think he deserves some leeway as a third string guard on a minimum deal pressed into a starting role. It would take a disaster for Reggie to get a failing grade as long as he’s being asked to shoulder such a big load, and he was far from a disaster tonight–he just wasn’t very good. I won’t even place any large amount of defensive blame here: Kyrie Irving made amazing, difficult shots, the Nets’ offense is gonna put up 120 no matter what you do, and it would be unfair to expect Reggie to make a serious disruption in either of those things. But Reggie wasn’t a good decision-maker offensively tonight, from turnovers to out of control drives to the basket to over-dribbling to a rushed, off-balance transition three with the Clippers down 7 and 1:13 left. The last few games, we’ve seen an emergency replacement come in and be a legitimately good starting point guard. Tonight, he was just adequate.

Paul George: B. PG didn’t get off to a hot start, but he finished the game with 26 points on 11-24 from the field and 3-7 from deep, making for a pretty good efficiency night scoring the basketball. He also added 6 assists, 4 rebounds, 2 steals, and 3 turnovers in his 36 minutes. I’m not going to blame him for only getting one free throw, as the Clippers were victims of terrible officiating for the vast majority of the game. Overall, PG was fine tonight. I don’t have any big complaints about his play, but I’m also not left raving about his performance.

Kawhi Leonard: A-. Kawhi was positively dominant early, but cooled off a bit as the game went on. He still finished with an excellent box score, putting up 33 points on 12-24 shooting, 5 rebounds, 5 assists, 4 steals, 2 blocks, and 0 turnovers. While Kawhi can’t control some shots bouncing in or out at different points in the game, his line would look even better if he’d gotten anything resembling a normal whistle, especially on several missed jumpers where he was clearly hit on the arm. Kawhi clearly brought a different level of intensity tonight for a big game, but unfortunately couldn’t do quite enough to lift the Clippers to victory.

Nicolas Batum: A. It’s pointless to argue what the biggest game of the Clippers’ season has been so far, but this sort of felt like it, even with open night against the Lakers in the rear-view mirror. Anyway, the point is that if someone had told you that Nic Batum was going to be the Clippers’ third 20-point scorer in a high-profile, nationally televised game between two contenders, you’d probably have thought they were crazy. But he did it: 21 points and 6 rebounds on 7-10 shooting. There isn’t much he could have done defensively to stop Kevin Durant from hitting heavily contested shots off the dribble, but his 21 points on 10 shots came way closer to offsetting Durant’s 28 on 13 than anyone could have reasonably expected–plus, the Clippers were at least able to fluster Durant enough that he only got 13 shots off and had 5 turnovers, even if he couldn’t miss whenever he did shoot.

Serge Ibaka: C. Some folks wanted to see Serge come back in for a guard and close the game with George, Leonard, Morris, and Batum, but I back the decision to stay with a guard in those closing moments. The Nets went small (they actually played small the vast majority of the game) and the game for the Clippers became a lot more about 1-on-1 perimeter defense (they couldn’t help much because Brooklyn has 3 unstoppable scorers and two guys shooting in the high 40%s from deep) and offsetting firepower. Ibaka was just 3-11 from the field tonight, including 2-7 inside the lane, and his inability to punish Brooklyn for switching guards onto him or helping off of him and leaving him open for short jumpers really took the wind out of the Clippers’ sails offensively. Serge has had some really inefficient games lately on what should be high-quality looks, and he’s going to have to convert in the lane more consistently.

Marcus Morris: B+. Morris didn’t dominate this game, but he was great in his role, hitting big shots from beyond the arc and doing an excellent job when switched on to James Harden defensively. Harden, like the Mavs’ Luka Doncic (who Morris also did a good job against last playoffs), is a prolific driver not due to his speed but due to his strength at the guard position, so a stronger wing like Morris can often offer a tougher challenge, especially when switched in a screen-and-roll. Marcus drew two huge offensive fouls against Harden as James attempted to bully his way to the rim and found stronger-than-usual opposition waiting, nearly swinging the game. Offensively, Marcus had 16 points on 6-10 shooting, with his only miss inside the three-point line coming when his shot hit the side of the backboard after the ball was dumped to him late in the shot clock.

Lou Williams: B-. Lou continues to struggle to score efficiently, but he also continues to be a welcome source of smart playmaking so that not every possession has to run through George or Leonard (obviously those guys should both get tons of touches, but asking them to do the heavy lifting on every possession will wear them out). He had 5 assists again tonight, and also found a pair of steals. You’ll ride with players through misses and makes, and it’s far more likely that Lou’s mid-range misses are just an off stretch than a lifelong skill that has suddenly disappeared. What’s more worrying is his shot distribution–I don’t think anyone should come into the game and take 6 of their 7 shots from the mid-range. Last year Lou took 53% of his shots from either the rim or deep, with the other 47% spread between the restricted area and the three point line. This year, just 41.4% of his attempts are coming at the rim or from deep, and his free throw and three point attempt rates are significantly down. I do believe that his efficiency in those mid-range categories will climb to normal levels eventually, but even if he was hitting at last year’s percentages he’d be less efficient because his shot selection has been measurably worse.

Ivica Zubac: D. I’m a Zu defender, but I’m just gonna say in this space what I’ve said elsewhere tonight: the Nets just aren’t the match-up for Zu. There’s an allure to deploying a dominant offensive rebounder against a small-ball team to try and make some stuff happen, especially as you need the bonus possessions to keep pace with Brooklyn’s scoring. Zu did make a couple of plays on the offensive glass tonight. But the diversity of high-efficiency options that Brooklen has offensively just seemed to make things especially difficult on Zu in his role cleaning up others’ messes, and as a result he found himself out of position and making mistakes. In his 16 minutes, he had 4 fouls, 2 turnovers, 3 rebounds (only 1 of which was defensive) and 2 points (on a nice post move!). Maybe the Nets will shore up their big depth and Zu will be able to find a little more comfort against a bigger Brooklyn lineup in a potential Finals meeting–or maybe, if LAC makes the Finals, it will be against the Philadelphia 76ers with Zubac crucial in defense against Joel Embiid. Plus, there are three rounds before the Finals that the Clippers need to win, and we saw how great Zu was in both rounds of the playoffs last year. But if tonight was game 1 of a 7-game series between these two, I think we’d be having some serious “this isn’t the series for Zu” talks.

This might be controversial, but I’m not assigning a grade to Luke Kennard tonight. He played four first-half minutes before being pulled, but didn’t do anything to really warrant the short leash. Unlike his early pull the other night, Luke wasn’t passive today–he got in and took two threes in his 4 minutes of action, missing both. He didn’t make any major mistakes and finished with a rebound and a +/- of 0. I was largely fine with Ty Lue’s minutes distribution tonight and I get the decision to not really play Luke here, but I think that decision was probably made in a vacuum moreso than based on something egregious from his short shift.