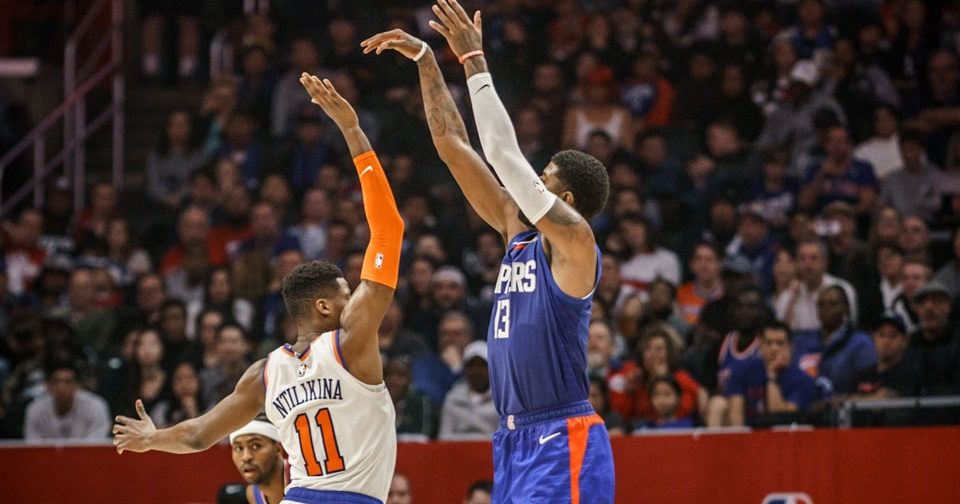 The Los Angeles Clippers visit Madison Square Garden on Sunday for a matinee matchup against the New York Knicks. A win will bring the Clippers to .500 on the season, while the Knicks hope to stop a three-game skid.

The Clippers are coming off a huge Friday night victory over the Sixers in Philadelphia.  LAC overcame a 24-point second-half deficit to log their second 20+ point comeback this season, beating Doc Rivers and company 102-101.  Ten days earlier the persistent squad stunned the Nuggets, erasing a 25-point deficit and walking away with an 87-85 win at home.

New York has not fared particularly well this season. They are averaging 104 points per game (27th in the NBA) and rank last with regard to both points in the paint (40.9) and pace (95.1).  Since January 17, 2022, they have dropped games to the Hornets, Timberwolves, and Pelicans. Two of the three games were double-digit losses. The squad is also a bit beat up at the moment, with a handful of contributing players – including Nerlens Noel, Derrick Rose and Kemba Walker – listed as out or questionable for Sunday’s contest.

The storied franchise has an unimpressive record at home (11-14), unsurprising given the tumultuous relationship between Knicks’ players and their unforgiving home crowd.

“It was really like 6 on 5 out there because [the Knicks] were frustrated & missing shots. The [MSG] crowd was frustrated so they were booing them & giving us fuel. I’m not saying the fans were on our side, but they weren’t on their side either.”

Despite their lack of success to date, there is a bright spot on the horizon for the Knicks in Cam Reddish. On January 13, 2022, the Knicks traded Kevin Knox and a conditional first-round pick to the Atlanta Hawks for Reddish, the former Duke standout selected 10th in the 2019 draft. There is a chance Reddish could make his Knicks debut on Sunday against the Clippers, reuniting him on the hardwood with R.J. Barrett, his former Duke teammate.

Reddish, 22, was averaging 11.9 points on 37.9 percent shooting from deep in 34 games this season with Atlanta. He is a high-upside addition for the Knicks and could give them the push they need to get back into playoff contention.

Fun Franchise.  The Clippers have been a surprisingly fun watch this season, even without “Fun Guy” Kawhi Leonard and co-star Paul George. The team has demonstrated a flexibility, adaptability, and heart unmatched in the NBA. Much of the franchise’s success can be attributed to Los Angeles’ excellent coaching staff and the culture they have built. However, the majority of the credit must go to the players themselves, many of whom have exhibited a maturity, confidence and grit well beyond their years in the league. They continue to fight, night after night, regardless of who is on the floor or available off the bench. The Clippers may not get Paul George or Kawhi Leonard back this season or achieve the goal of a 2021-22 championship, but when all is said and done, I think most fans will consider this season a success, even if just from a player development and chemistry building standpoint.

Glue Guy.  Thirteen-year veteran and fan favorite Nicolas Batum continues to have a solid season, despite injury and cycling in and out of health and safety protocols.  He is shooting a career-high 41.4 percent from distance, and has made a meaningful impact on defense with his length and anticipation. The best “Glue Guy” in the league as Reggie Jackson described him after Friday’s comeback win in Philly.  Nico’s wife (and also a fan favorite) Lily endorsed the sentiment with a retweet.

Nico’s calm demeanor, excellent hands-on defense, and timely shot making were all contributing factors in the win against the Sixers. Batum ended the game with 15 points, 2 steals, 3 assists and 7 rebounds, in just under 30 minutes. Days earlier, the Frenchman scored all 32 of his points in the second half and had his most points in a game as a Clipper.

It’s a Family Affair.  The Clippers’ win against the Sixers illustrated their depth, confidence, and chemistry. Despite missing their dynamic duo of Leonard and George, they really believe they have the talent and will to beat any team in the league. And they do – the Clippers have six wins against the NBA’s top 12 teams. Four of them have come without Paul George (and no Kawhi in all six).

The Clippers also perfectly embody and embrace the phrase “next man up.” On any given night, the Clippers boast a number of unassuming gritty players who can hit double figures and help carry the team to victory. Friday’s success demonstrates this perfectly. In the franchise’s balanced comeback win, seven Clippers scored in double figures: Jackson (19), Batum (15), Morris (12), Zubac (12), Coffey (12), Kennard (10) and Hartenstein (10).

Feel free to stick around and chat down below as this article’s comment section will serve as our live game thread tonight against the New York Knicks. Sign up for a free account and join the conversation!