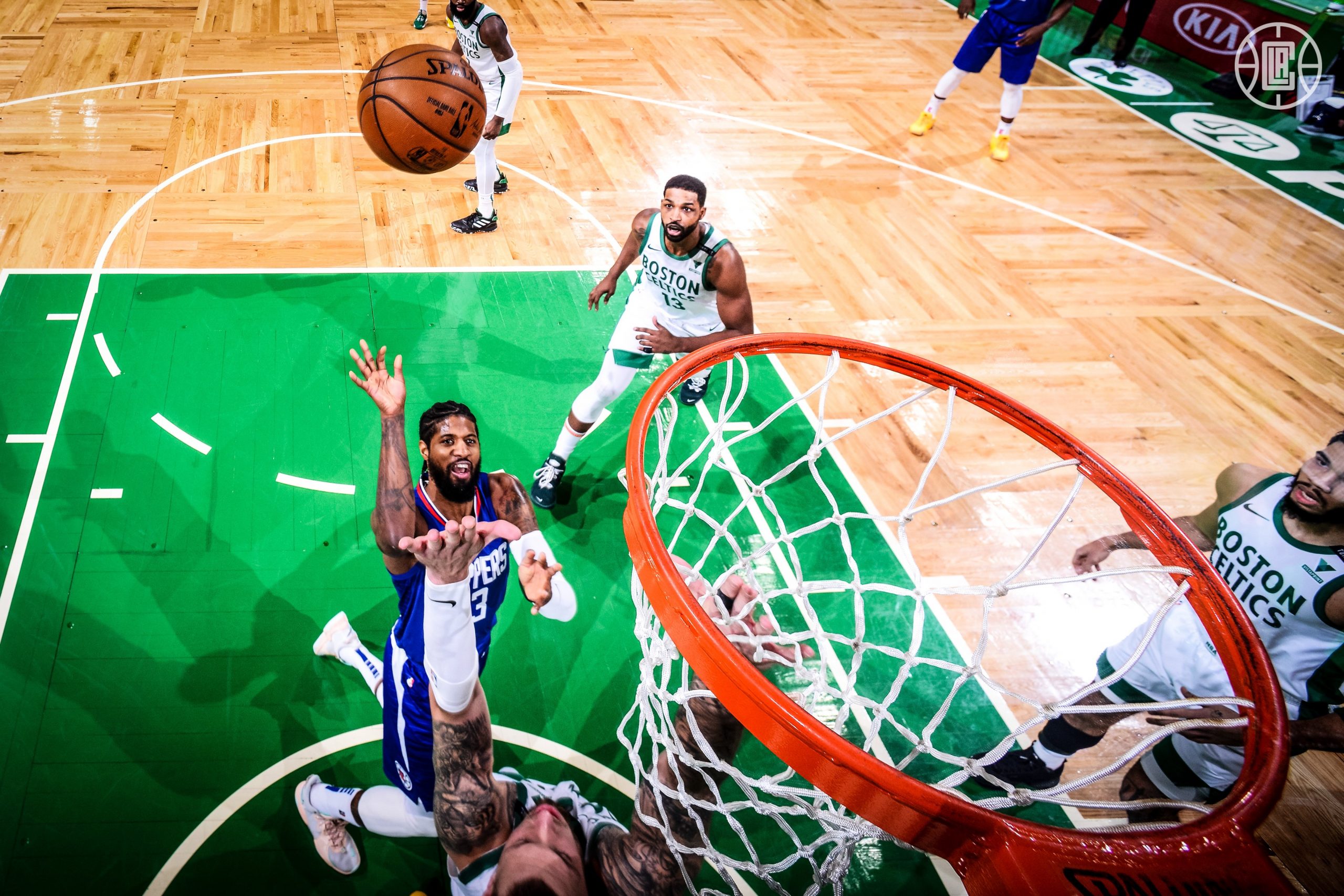 Before we get to the game play, a few things happened between our preview and this recap: First, Jaylen Brown went from questionable to available, and started for the Celtics. Second, Kawhi Leonard was a very late scratch. Per the Clippers, although Reggie Jackson started for Kawhi, he was supposed to be available. Then, towards the end of the quarter, it was announced that he was out due to back spasms. Now, on with the rest of the recap of the Clippers’ loss to the Celtics.

The first quarter was fairly high scoring, with the Celtics taking a 35-32 lead, and both teams shooting above 59% from the field. The Celtics were led by Brown, who hit six shots (two threes) in the first frame, finishing with 14 points. He was rivaled by Paul George, who was 5/6 (1/2 from three) and finished an and-one for twelve points. Neither team was particularly sharp on defense, but the Celtics certainly getting easier looks early. They probably should have been up by more if it were not for four turnovers.

Zubac was great on the glass early, with two offensive and defensive rebounds each in the first quarter and already had six by mid-way through the second quarter. Marcus Morris, Sr. was huge off the bench, finishing halftime with 10 points on 4/7 shooting. Morris and George were able to keep the Clippers in the game after the Celtics opened up an eight point cushion early in the second. George was aggressive and took advantage of smaller defenders (21 points on 8/12 shootings the half). The lead changed hands a few times but stayed close, with the Clippers going into halftime with a one point lead, 63-62.

Reggie Jackson also added 10 points and the Clippers as a whole continued to shoot very well (over 56% from the field and from three). The Celtics’ shooting slowed down a bit, but Kemba and Tatum joined Brown in double digits to lead their offensive production.

Just before the half, Morris went to the locker room early after getting elbowed in the head by Jaylen Brown while going up for a rebound. During the third quarter, it was announced that he in fact had a concussion, and would be out the rest of the game.

In the fourth, the Clippers let themselves get into a hole, including giving up a nine point run. They eventually responded with a run of their own, but the Celtics were able to hold the Clippers at arm’s length. The Clippers got within four (109-113) with about two minutes to go but the next two Clippers shots were rushed Paul George three pointers, neither of which were successful. Although George did hit a three with 11.5 seconds left, it was too late. The Clippers were playing the foul game and the Celtics were able to knock them down (including two clutch free throws by Daniel Theis), closing it out.

Luke Kennard Gets a Quick Look: Although Kawhi was sitting and Morris left the game early, Kennard did not get into the game until the last two minutes of the third quarter. I am a proponent of Luke getting back into the rotation, but he was put in a tough spot (three guard lineup) and did not look ready to go. In my view, this team has a higher ceiling with Kennard playing well because he is a versatile scorer who can take pressure off of Kawhi and George. He has not earned the playing time yet, but I would like to see him quality minutes so he can grow. After all, he barely played last season. He needs reps.

Reggie Jackson Starts: Reggie was extremely productive tonight, so he deserves a shout out. He had 25 points, 7 assists, and three rebounds (three turnovers) on 10/14 shooting from the field and 5/6 from three. He was -10 +/-, for what that’s worth. The bench overall was outplayed, so he might be suffering there because of that.

Drawing Fouls: The Clippers only shot nine free throws all night, which is not good enough, even with Kawhi out. Boston was 17/23 from the line, so their win margin was essentially found there. In fact, the Clippers made more field goals and three pointers. Part of this is due to the fact that the Clippers were taking longer shots and not attacking the basket, of course, but there needs to be more intentionality about getting to the line, especially from Lou and George.

That about does it for this recap of the Clippers’ loss to the Celtics. Stay tuned for Lucas’ player grades and a new episode of TLTJTP, and come back Thursday for a final contest against the Wizards.