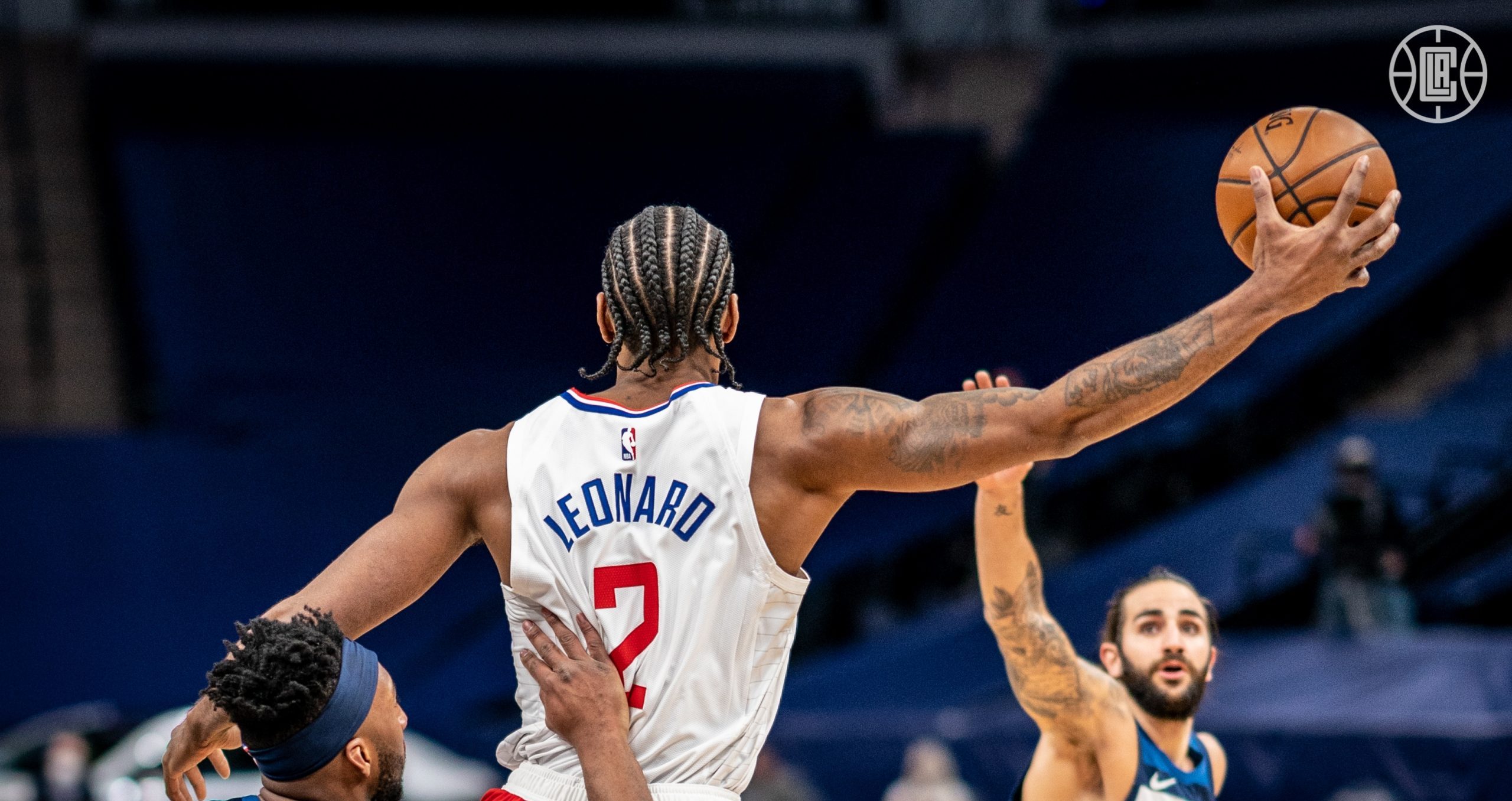 The Clippers won vs the Bulls yesterday to sweep the season series, and it’s time for the newest installment of our player grades series to reflect what we saw from the team tonight.

Reggie Jackson: B-. A bit harsh here for Reggie, who had a perfectly respectable individual line with 11 points on 5-11 shooting, 4 assists, and no turnovers. But even as he made a decent percentage of late-clock bailouts and awkward floaters, he simply hasn’t been able to run the Clippers’ offense well enough. In this game, the team had an offensive rating of 114.3 when Jackson played and 138.0 when he sat (114.3 is still good, but it’s worse than the Clippers’ season average and miles worse than the unbelievably-good 138.0). On a night when the Clippers weren’t benefiting from above-average shot-making, Reggie’s trouble running an offense that could consistently generate good shots could have really cost them.

Patrick Beverley: B. Pat didn’t do a ton tonight, as his minutes restriction kept him to 12 before he got the fourth quarter off with the game in hand, but the team was better with him on the floor–they had a +46.9 net rating in his 12 minutes. That’s essentially a meaningless sample if we’re drawing long-term conclusions, but if we’re just evaluating his 12 minutes it seems fairly notable that he was a part of some dominant basketball.

Kawhi Leonard: A. In Michael Jordan’s house, Kawhi put together a mid-range performance that would make the GOAT blush, going 9-9 on two-pointers longer than 10 feet en route to a 33-point, 6-rebound, 3-assist, 2-steal, 0-turnover outing. The Clippers got smaller defenders switched onto Kawhi and sent him to the mid-post, the Bulls’ help stayed home instead of bringing double teams, and Kawhi elevated and hit practice shots… and hit again, and again, and again, relentlessly crushing Chicago’s hopes. A lot of times you watch some of the league’s most dominant stars in terms of physicality or shot-making–LeBron, or Giannis, or Steph–and feel like it’s just unfair. Kawhi was unfair tonight.

Nicolas Batum: B+. Nic had a quiet night offensively as other Clippers rose to the occassion, but he was still efficient–7 points on 2-4 shooting–and he was very good defensively. As the Clippers played the Bulls’ pick-and-rolls more aggressively to prevent another 40-point outburst from Zach LaVine, Batum was amazing in help and rotation, coming up with 3 steals and a block.

Serge Ibaka: C+. I’d probably say that Serge was a B/B- offensively tonight and a C/C- defensively, as he made solid but unspectacular contributions offensively and was rough but not terrible on defense. He finished with 9 points on 4-9 shooting and while he also had a steal and 2 blocks, he overall was not as good as Zubac in his coverages and the Clippers were better defensively with him off the floor.

Terance Mann: A. Here’s something to think about: Mann played a team-high 33 minutes, and in a game the Clippers won by 19, they lost the 15 minutes when he was on the bench. He wasn’t the team’s best player or the focal point offensively, but he was aggressive and contributed on both ends of the floor with 7 points on 3-4 shooting, 4 rebounds, 2 assists, 2 steals, a block, and 2 turnovers. He was also the team’s primary defender on Zach LaVine, and did a really nice job against a guy who is having one of the best individual scoring seasons ever. Terance is going to have to figure out a new way to fit in when Paul George is back, but it’s veyr hard to keep him off the floor right now.

Marcus Morris: A-. I feel like I use this space a lot to write about how Morris’ shot-making is impactful but he hasn’t necessarily made a well-rounded contribution. Well, tonight he wasn’t great across all categories, but he was good, and his shot-making was at its absolute best: 20 points and 6-8 from three, including 15 points on 5-6 from deep in the fourth quarter. You put up 15 fourth-quarter points, especially as the Clippers pull away with Paul George sidelined and Kawhi Leonard taking a shift on the bench, and you’re getting a good grade.

Lou Williams: A. LouWillVille indeed. Lou’s 17 points on 8-13 shooting and 5 assists to 0 turnovers were essential to the Clippers’ offensive success, second only to Leonard’s mid-range masterpiece and probably even more important in terms of running the offense to consistently generate good looks for himself and others. It’s not surprising that the Clippers’ offense was better with Lou on the floor–138.0 to 116.7. But that margin is astounding, and further evidence that Lou really needs to be playing more as long as Paul George is out. In the four games since George went down, the Clippers have a +10.8 net rating in Lou’s 104 minutes and a +0.5 net rating in his 88 minutes on the bench. Put that man on the court and put the ball in his hands.

Luke Kennard: C. Another night, another nothing burger for Luke Kennard, who had 3 points, 3 rebounds, an assist, and a steal in 18 minutes that the Clippers played evenly with the Bulls (remember, they won the other 30 minutes by 19 points). Luke can’t be overly blamed for that lineup being average, since it was mostly him watching other guards make mediocre attempts at initiating the offense, but he also can’t be credited for much while he’s just standing there watching. I’ll say this, though: as long as Luke isn’t going to make an impact with the ball in his hands, he’s more valuable when Paul George is healthy and the threat of Luke’s shot can keep the floor open for the Clippers’ ball-dominant stars. I noticed tonight how much space Kawhi got in single-coverage in the post when Luke was the nearest shooter. Teams know better than to help off of him.

Ivica Zubac: B+. Zu had a couple of nice shifts for himself, and was effective as a roll man in the LouBac action, which helped fuel the offense in both halves. He also continues to be one of the Clippers’ most impactful defenders as he patrols the paint. Zu finished with 12 points on 5-6 shooting, 4 rebounds, an assist, and a block, but 5 fouls limited him to 15 minutes. A couple of the calls that went against him were pretty rough, but foul trouble has been an intermittent issue for Zubac this season and it hurts the team when their best big man (by a clear margin for several weeks now) has his minutes artificially limited.

Mfiondu Kabengele isn’t going to get a grade for his garbage-time performance art piece pantomiming the three stooges, because I’m trying to be nicer. Daniel Oturu and Jay Scrubb are both listed on ACCO’s roster in the G-League’s Orlando bubble, but neither are playing due to injuries (Oturu, from what I gather, is actually with the team and may or may not return before bubble play ends, while Scrubb isn’t with ACCO and could miss the entire NBA season). Amir Coffey is actually playing for ACCO, and had 20 points tonight in a narrow win. Paul George wasn’t with the team on this two-game trip as the team evaluates his bone edema, and Patrick Patterson was the sole unused substitute for Ty Lue tonight.