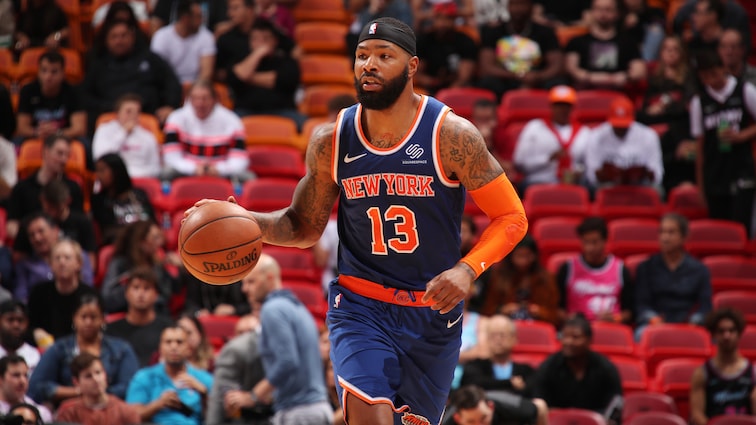 After weeks of speculation, including my foolish-in-retrospect refrain that “the Clippers always do something that we didn’t see coming,” Jerry West, Lawrence Frank, and the rest of the Clippers’ front office did exactly what many have been expecting them to do for months: trade Maurice Harkless, Jerome Robinson, and LA’s 2020 first round draft selection for the Knicks’ Marcus Morris.

The price ended up being slightly steeper: the Knicks also pried Detroit’s 2021 second round draft pick from the Clippers, as well as the rights to swap first round selections in the 2021 draft (top-4 protected). The latter is overwhelmingly unlikely to mean anything, as the odds of the Knicks having a better record than the Clippers in the 2020-21 season (and thus exercising the swap rights) are incredibly low. The former, however, stings a bit: the Pistons are seemingly on the verge of a full rebuild, and could bottom out next year, making their 2021 second round pick in the early 30s. For a pick-depleted Clippers team (they do not have a first round pick to trade until 2026 or their own 2021 second round pick), that Detroit selection would have represented their best chance to be a buyer at next year’s trade deadline.

Still, acquiring Morris for Harkless and Robinson makes this team better on the court this season, and that’s significant. The Clippers have Kawhi Leonard and Paul George in their primes on two-year contracts. Even if the team’s championship window is extended by new contracts in the summer of 2021, Leonard’s chronic injury issues could mean an earlier-than-usual retirement for the two-time NBA Finals MVP. The team already forfeited any present/future balance by trading Shai Gilgeous-Alexander and a bushel of picks to acquire George. It’s clear: the time is now, the Clippers are all-in.

Morris isn’t necessarily only a short-term piece, though. At 30 years old, he roughly fits the Clippers’ timeline even beyond this two year window (George is 29, Leonard 28), and when Morris’ $15,000,000 contract expires this July, the Clippers will be able to re-sign him to a deal starting at as much as $18,000,000–more than enough to keep him around.

One of the Clippers’ oft-discussed weaknesses this season has been a sometimes stagnant, isolation-heavy offense with their starting unit. The obvious answer would be to add a distribution-oriented point guard, but such an addition would be complicated: no such target was readily available, and changing the offense so drastically would take the ball out of George and Leonard’s hands. Also, Patrick Beverley’s unique skillset, intangibles, and leadership would be difficult to replace with a more traditional point guard.

The next-best alternative, then, seems to be playing an elite shooter in lineups with Pat, Paul, Kawhi, and one of the team’s centers. Landry Shamet, likely the team’s best three-point shooter, has had an up-and-down year but has clearly made large a positive impact in recent weeks as he’s found his rhythm. To a lesser extent, the Clippers’ offensive fluidity has seemed slightly better when Patrick Patterson, a capable and willing shooter, has played at power forward.

That’s where Morris can provide the Clippers’ offense with a big boost. A solid career shooter from deep (36.9% on 7.4 attempts per 100 possessions for his career, and 37.2% on 8.6 attempts per 100 possessions across 2017-19 in Boston), he’s shown elite marksmanship this season, hitting 43.9% from deep on 9.3 attempts per 100 possessions, good for fourth in the NBA. Even if his shooting numbers regress slightly–and they already are, as he shot 56% from three in November, 36% in December, and 40% in January–he brings a drastically more willing, efficient, and reliable shooting option at the power forward position than Harkless, who was reluctant to even attempt threes, and Patterson. The situation is slightly murkier with the Clippers’ JaMychal Green, who was a major contributor last year (and shot 41.3% from deep) but has been inconsistent across health, minutes, and effectiveness this year.

In contrast to Shamet, Morris potentially gives LA an elite shooter with size, meaning that they can hope to replicate the spacing of a Beverley – Shamet – George – Leonard quartet with Morris at power forward and George and Leonard on the wings, protecting Kawhi from defending big men. Morris likely won’t imitate Shamet’s movement offensively with regards to navigating off-ball screens, but he’s more capable in terms of creating his own shot or driving against close-outs on the perimeter.

One bigger disparity will come in ability to create for others. While Shamet is not exactly a major initiator, he has a higher assist percentage than Morris (9.0% to 6.9%, measuring what percentage of teammates’ makes they assisted while they were on the floor) despite a drastically lower usage rate (13.3% to 24.3%). In fact, Shamet is averaging more assists than Morris despite playing fewer minutes per game and seeing drastically fewer touches.

At the very least, it will be interesting to see if Morris’ shooting helps to open up the Clippers’ offense, or if his mid-range-heavy, ball-movement-light tendencies bog it down. That balance will likely be the biggest determining factor for his success in LA.

Defensively, Morris isn’t as good as Harkless as an individual or team defender, nor is he as versatile as the smaller, quicker Harkless. The Clippers frequently used Moe on opposing guards. However, the need for such cross-matching from the power forward position was always questionable at best, as the Clippers’ starting lineup features three top-tier perimeter defenders, and seemingly was not enough to offset Harkless’ offensive deficiencies. Morris can’t defend across as many positions as Moe, but he is slightly bigger, stronger, and a little grittier, which could end up being a slight net positive by replacing a redundant good defender with a better fit for an above-average defender.

The largest question unanswered, though, lies at the center position. Clearly the Clippers’ biggest weakness heading into the deadline, this deal does little to address the critical combination of Doc Rivers’ lack of trust in Ivica Zubac and Montrezl Harrell’s lack of defensive effort and ability. Morris could hypothetically play center in extreme small situations (like against the experimental Houston Rockets), and his presence as a more legit power forward might make JaMychal Green center minutes more viable than the smaller Harkless, but ultimately he is not going to be a consistent option at the position.

The Clippers do have two open roster spots, and–thanks to a salary-dumping trade of Derrick Walton Jr.–enough room under the luxury tax line to sign two rest-of-season deals in the buyout market. My guess is that Beverley, George, Leonard, Morris, and Zubac start while Lou Williams, Shamet, Green, and Harrell serve as key rotation pieces. The underwhelming Rodney McGruder, then, is the Clippers’ emergency wing, while Patterson is their emergency power forward. At point guard and center, however, the team would have to turn to Terance Mann or Jonathon Motley, and you’d hope that neither would see playoff minutes this season, so I’d expect them to pursue veteran options at those positions to fill out the roster.

The reality, though, is that it would be unrealistic to expect anyone that the team could add at center at this point to actually bolster their interior defense. The Clippers’ largest weakness went unaddressed at this deadline, and they’re banking on the addition of Marcus Morris providing enough offensive potency to make up for it.