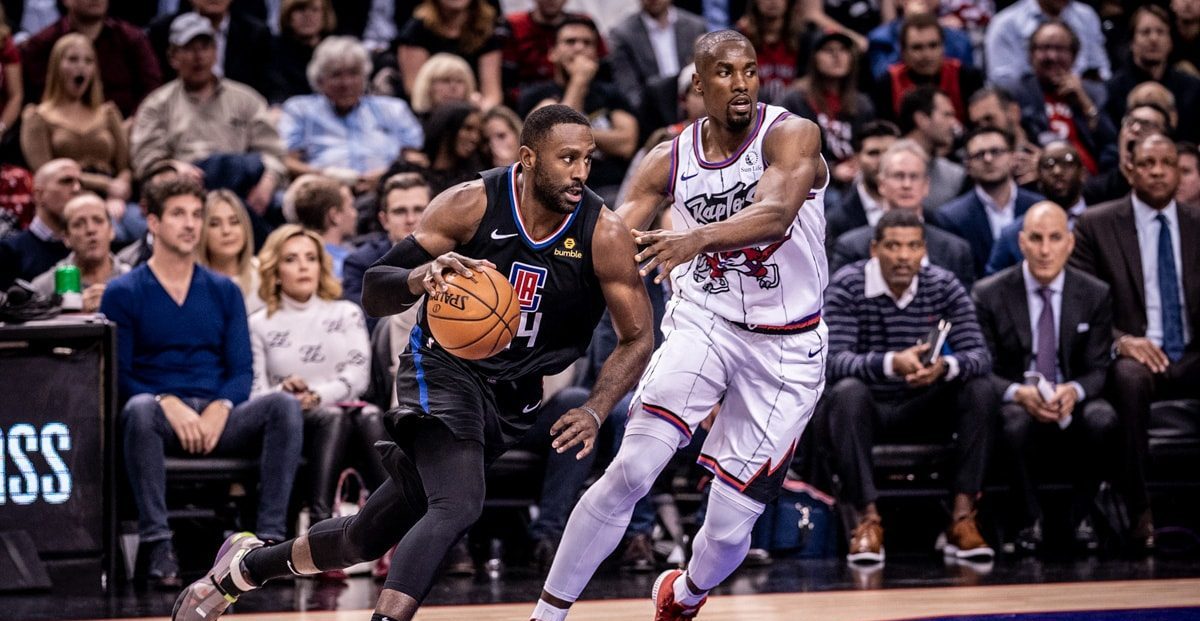 Clippers Free Agency: Serge Ibaka Would be a Dream

As the NBA Finals continue, the Clippers are among 28 NBA teams with their eyes set on free agency, and Serge Ibaka should get a lot of attention once the off-season begins.

Key stats: Last year, made 55 appearances and 27 starts for the Toronto Raptors, averaging 27 minutes per game and 15.4 points and 8.2 rebounds while shooting 38.5% from three on 3.3 attempts per game.
Contract status: Ibaka is an unrestricted free agent coming off of making $23.3 million in the last year of a 3-year, $64M deal with Toronto. The Raptors have his bird rights and can exceed the cap to make him an offer.

Despite making his name in the NBA as a lob-finishing, shot-blocking hyper-athletic power forward, Serge Ibaka has evolved as his career has gone on–his greatest strength is now his three-point shooting and all-around offensive game.

If the Clippers, as expected, move on from Montrezl Harrell this off-season and are looking for a new backup center, one of the biggest questions will be where the team will replace Harrell’s offensive production: 21.7 shot attempts and 31.7 points per 100 possessions in the regular season. While his playoff shortcomings outweighed his regular season volume scoring, those 82-game contributions are still important–and Ibaka is the best candidate on the market to potentially replace that output, posting per-100 possession numbers of 27.1 points on 21.5 attempts (most of the discrepancy in output came from Harrell getting to the foul line more often).

In terms of how they get their points, however, Ibaka and Harrell are much different players. Where Harrell works almost exclusively at the rim, Ibaka has a more diverse offensive game, with his shots mostly concentrated in the paint and three-point line but also coming from the mid-range. In the regular season, Ibaka took 27% of his shot attempts from three, but that number increased in the playoffs to 41%. A lot of his work came in pick-and-pop situations, and over 90% of his regular-season field goal attempts came following either 0 or 1 dribble–meaning he was finishing plays not creating. As a passer, he doesn’t bring much.

Defensively, Ibaka played on one of the NBA’s most cohesive squads, so it’s a bit harder to project where he’d fall on that end on another team. A 3-time All-Defensive 1st team player (from 2012-2014), he has the veteran pedigree and awareness to play within a system and do his job. Nobody should be expecting the Ibaka they remember from seven years ago, but he’ll be a solid option as a second defensive 7-footer, something the Clippers didn’t have last season.

Funnily enough, considering his history as one of the league’s most prolific shot-blockers, Ibaka’s weaknesses are what were once his signature strengths: dunks and blocks. Last year, he had less than one of each per game–far fewer than during his peak years and even fewer than Montrezl Harrell last season. While those are largely glamour stats, it’s worth noting that as Ibaka’s defensive game has evolved from highlight blocks to more solid positioning-based play, he’s evolved from playing PF early in his career to almost exclusively C.

Offensively, he isn’t going to provide the same kind of speed and athleticism as Harrell when rolling to the rim and finishing in traffic. He doesn’t get to the foul line as often as Trez, and Ibaka can be prone to taking lower-efficiency mid-range jumpers when driving lanes are unavailable to him. It’s also worth wondering how many of his looks he’d still get on a Clippers team that doesn’t move the ball as well offensively as the Raptors: over the last two seasons, 79% of Ibaka’s two-point field goals have been assisted, as have 99% of his three-pointers.

Overall, Ibaka would be an exceptional fit on the Clippers, and he’s their best-case scenario as a backup big man this off-season. He’d split time with starter Ivica Zubac, allowing the young big man to play significantly more than last season without thrusting too much responsibility into the lap of a still-developing player. Importantly, the two would also be able to split time in the playoffs against matchups like Nikola Jokic, and Ibaka would give the Clippers a more versatile option against small-ball looks without needing to fully commit to playing a small lineup of their own.

The Clippers would miss having a real rim-runner, which has been a fixture of the team’s offense through the DeAndre Jordan and Montrezl Harrell years, but Ibaka would provide them with the ability to stay big and space the floor from the center position, opening up driving lanes for Paul George and Kawhi Leonard. For a team that doesn’t have true pick-and-roll ball-handlers, it might not be so bad to go away from a guy like Harrell, who is stylistically at his best when rolling to the rim.

Ibaka’s pick-and-pop style could also at times be a bit redundant with the Clippers’ power forwards. Marcus Morris, JaMychal Green, and Patrick Patterson are all headed into free agency this summer, but the team would like to retain them (particularly Morris and Green). But minimal returns from last season are promising: the Clippers had a 121.8 offensive rating with both Morris and Green on the floor, so fitting Ibaka into those lineups should work well. At the end of the day, putting 5 efficient three-point shooters on the floor is never a bad thing for your offense, especially with players like Morris and Ibaka who have a lot of versatility heading to the rim as well. Playing shooters in the front court could also indirectly help the Clippers with their point guard issue: it would be easier for the team to add a downhill driver at guard who isn’t a great shooter if the second unit is stocked with Landry Shamet, Green, and Ibaka.

The Clippers will likely be unable to offer Ibaka more than the taxpayer mid-level exception, starting at 6.1M and running for up to 3 years. That’s far, far less than Serge’s market value will be this summer after a stellar season in Toronto, and the Raptors have his full bird rights to potentially offer him a bloated one-year deal to return. After having a resurgence at 31 years old, and with his colleague Marc Gasol pushing 36 (in January) and slowing down, it seems like the Raptors would want to prioritize keeping Ibaka around.

But veterans have chosen situation over money before, and Ibaka has made a lot of money in his career–over $120 million. The Clippers, and his good friend Kawhi Leonard, can paint an attractive picture of what Serge’s final 3-4 years of his career could look like living in Los Angeles and playing on contending teams. While the Raptors deserve remarkable credit for being incredibly good in 2020 after Leonard’s departure, their path back to title contention involved staying competitive with veterans like Ibaka on one-year deals, then casting him aside next summer to pursue bigger free agents. If Toronto has money and familiarity on their side, the Clippers’ main hope would be making a longer commitment that Ibaka is part of their plans beyond next season.

Overall, he’s overwhelmingly likely to return to the Raptors on a one-year deal. The money will be very good, and the situation is very good too. But if the Clippers are making a list of veteran big men to pursue in free agency, Ibaka should be the first call when the window opens–perhaps with some pre-free agency recruitment from his friend Kawhi to take Serge’s temperature. Landing him would be a huge step forward for this squad, so it’s worth making as strong of an attempt as possible before moving on to more realistic options.

One last wrinkle could be a sign-and-trade with Montrezl Harrell, who the Raptors are rumored to have interest in. As I discussed with Raptors writer Sean Woodley, Harrell doesn’t really make sense for the Raptors and helping Ibaka leave to bring Trez in would be just as much of a downgrade for a normally-savvy Toronto front office as it would be an upgrade for the Clippers. But even if Toronto was willing, such a deal would be complicated financially: Harrell’s outgoing salary number for trade math is limited by the base year compensation rule, making a workable deal hard to find. One bonus, though, would be that this pathway would allow the Clippers to pay Ibaka more than $6.1M while potentially saving that taxpayer mid-level exception for another player (the exception would be unused but the team would be hard-capped and might not have space to use it). Again, though, it feels unlikely that the Raptors would go along with helping the Clippers pry Serge away, especially if bad blood remains from LAC’s recruitment of Kawhi Leonard last season.