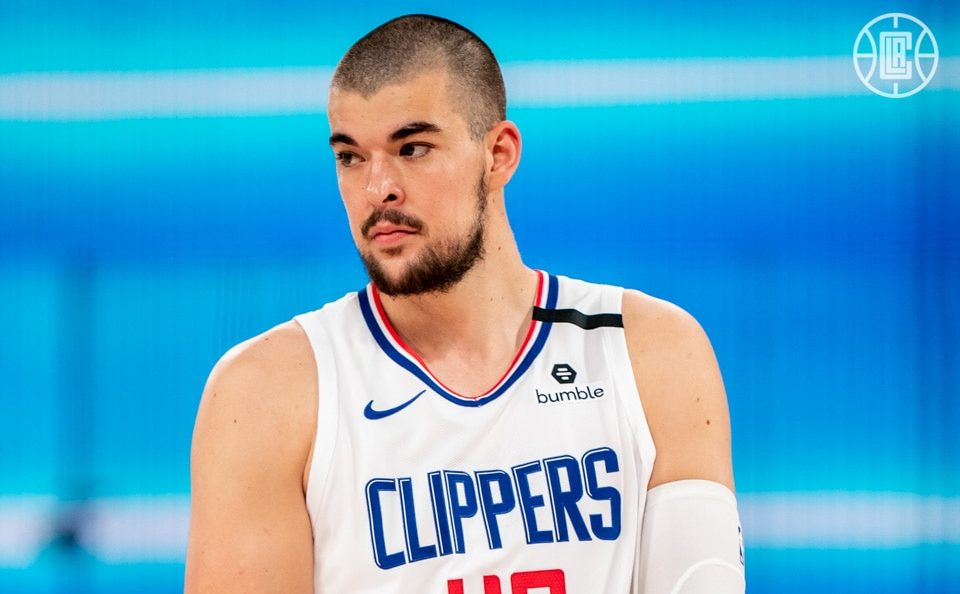 Now that the Clippers’ 2020 season has reached its disappointing end, 213Hoops will work through the roster player-by-player for our “Exit Interview” series. Today’s exit interview features rising center Ivica Zubac.

While most fans were excited that the Clippers gave up literally nothing (Mike Muscala, a guy they were probably going to waive) for Ivica Zubac, his actual play was considered more workman-like than anything else. Sure, for a 22 year old playing meaningful minutes for the first time in the NBA that was a huge step forward, but in the grand scheme of things he was just a piece to the Clippers puzzle, nothing more. His signing to a 4 year, $28M contract last summer was met with praise, but was not regarded as a massive win. The expectations for Zubac were simple: be a stopgap starting center who would start games off on a solid note, and then step aside to let sixth man Montrezl Harrell play the bulk of the crucial minutes in crunch time. As a young player, Zu was expected to improve, but nobody thought he would take a real leap except maybe as a shooter.

The shot never developed at all, but Zubac improved in almost every other facet of his game, and quickly won over fans who had been scarred by his poor performance in the 2019 playoffs. There were calls for him to play more minutes within weeks of the season starting, and those cries only grew louder as the team’s defense proved inconsistent and Doc’s reliance on Harrell became more blinding.

However, ever as Zu’s game took steps forward, his minutes decreased, shrinking from 20.2 in 2019 to a paltry 18.4 in 2020. More frustratingly, Zu almost never got a chance to play in the 4th quarter, with Harrell frequently playing from the mid-3rd quarter to the end of the game without rest. Not only did this blunt Trez’s effectiveness, but it also prevented Zu from getting reps with the starting unit in close, end-game situations – something that bit them in the playoffs. By the playoffs, the call to play Zu more minutes was overwhelming, extending even to beat reporters and close analysts of the team, as everyone saw the need for more Zu.

How exactly did Zu take such a leap? Well, first and foremost, he improved significantly on the defensive end of the court. While still not exactly prim Shaquille O’Neal, Zu was notably bigger and stronger this year, and that showed frequently. When other big men would post him up, he was able to hold his ground, and not give way as he had earlier. More importantly, he was able to go up strong as a rim protector, challenging shots at the rim on a frequent basis. When Zu played, the Clippers gave up fewer attempts at the rim and opponents shot a poor field goal percentage in that area. When he was out, opponents feasted. Zu went from a so-so defensive player to a quite good one in one season, and at the position where defense is most impactful at that.

It wasn’t just Zu’s defense that was enhanced though. His offensive game, too, was stronger. While not much was necessarily added (those videos of him draining threes were predictably misleading), his newfound strength led to going up much stronger in traffic. His field goal percentage surged as a result, going from a decent 53.8% in 2019 to an excellent 61.3% mark in 2020. And not only was Zu finishing more, but he was also getting to the free throw line at a higher clip, with a free throw rate of 0.431 compared to 0.323 the year before. To top it all off, he turned the ball over at a far less rate as well, and improved his offensive rebounding percentage to be tops in the entire league for qualifying players.

His abilities and Harrell’s prolonged absence from the Orlando bubble culminated in Zu playing more heavily in the postseason, upping his minutes to 24.6. Unfortunately, while this was an improvement, it still wasn’t enough, as the Clippers bled points when Montrezl Harrell took the floor. Additionally, Zu’s lack of playing time in tight situations was made evident by a couple end-of-game blunders, and by some fatigue late in contests. Still, even with a rough end to the Nuggets series, Zu was probably the 3rd best Clipper in the playoffs behind only Kawhi Leonard and Paul George, and probably the only Clippers outside of JaMychal Green to play above expectations instead of below.

In short, it was a stunning campaign, one that cemented Zu as the Clippers’ starting center for the next three years (hopefully more), and made his contract look like an absolute bargain.

The above statement really says most of it. Ivica Zubac has the Clippers’ starting center spot locked up, and with the presumed departure of Montrezl Harrell this summer, should see around 30 minutes per game for the foreseeable future. He’s not a franchise cornerstone like Kawhi or George, but his age, performance, and contract means that it is highly unlikely that the Clippers move him – he’s a great fit with their stars, is likely to keep improving, and is cheap to boot. Only a trade for another true star would cause the Clippers to even consider moving Zu, and that seems unlikely. Even in trades for guys like Chris Paul or Ricky Rubio, Zu should be safe. So sit back, relax, and get ready for more years of ZuBacca in a Clippers uniform – it should be a fun ride.