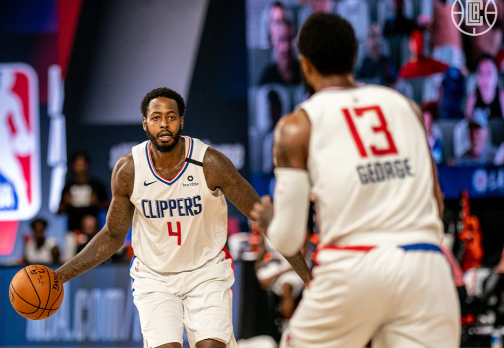 The LA Clippers defeated the Denver Nuggets, 124-111, to clinch the 2nd seed in the Western Conference, the highest finish in franchise history. The victory locks in their first-round matchup with the Dallas Mavericks.

The Clippers just wanted it more.

No really. I’m not leaning on some old sportswriters’ crutch. I won’t write a Shakespearean ode to the Clippers’ gallant heart and titanic will to overcome. They just wanted it more.

How do I know? Doc Rivers played his best players in the fourth. Denver Head Coach Michael Malone did not. The Clippers wanted to clinch the 2nd seed, the Nuggets were safe from a fall to 4th and knew that passing LAC was unlikely (and pointless, without home-court advantage).

With that neatly wrapped up, let’s go quarter by quarter…

I sat down to watch a critical seeding game and a scrimmage broke out. The pace was. . . relaxed. Let’s fast forward.

I guess these guys meant it when they said they didn’t care about seeding. The Clippers shot a lot of midrange jumpers. Let’s just get to the halftime numbers.

Nikola Jokic’s 15 points and six assists led everybody (in both). Kawhi Leonard looked sprightly and led the Clippers with 14 points, five of which came at the free-throw line. Lou Williams also looked fresh, which lifts one pre-postseason weight off. He scored 11 in the half. Jamal Murray looked healthy, which is a weight lifted for Denver. And Ivica Zubac was a menace again.

Nobody shot well. Neither team managed better than 30% from three. The Clippers ended the half trailing by eight.

Oh, look what showed up. A COMPETITIVE QUARTER.

Suddenly, there was intensity. It was like the fourth quarter of the All-Star Game. The Clippers sprinted out, first to a tie, then to a lead, both on the strength of a 23-7 rally. They began to move the ball with purpose, and their incisiveness opened the floor for better looks (and makes) from high-dollar territory.

Kawhi was a powerhouse with a soft touch. He scored with brutality and passed with acuity. He looked as fit as he has at any time in the bubble. He finished with an economical 26 points and five assists.

He also did this:

But the fun (guy) couldn’t last forever. Denver turned to Jerami Grant, it’s only credible option against Kawhi, who returned from a one-game injury absence. Only, instead of the guy you can kinda leave open in the corner, Denver got an unholy Game-Six Josh Smith/Corey Brewer tentacled creature with defensive chops and ambitions of grandeur. The Kawhi quarter quickly became the Jerami quarter, with Grant scoring 15 of his 25 total points in the frame.

Fittingly, Grant ended it like this, and if you watch closely, you can see the exact moment Doc considers a change in career.

Denver Coach Michael Malone tells ESPN between quarters that he won’t play stars Jokic and Murray very much in the fourth quarter. As it turned out, he didn’t play them at all.

With Jokic on the floor and Kawhi mostly on it, the Clippers ran out to a 15-5 start. And that was the contest and the second seed.

The Clippers wrap up the seeding games against Oklahoma City on Friday, with their near future in hand and perhaps Montrezl Harrell too.