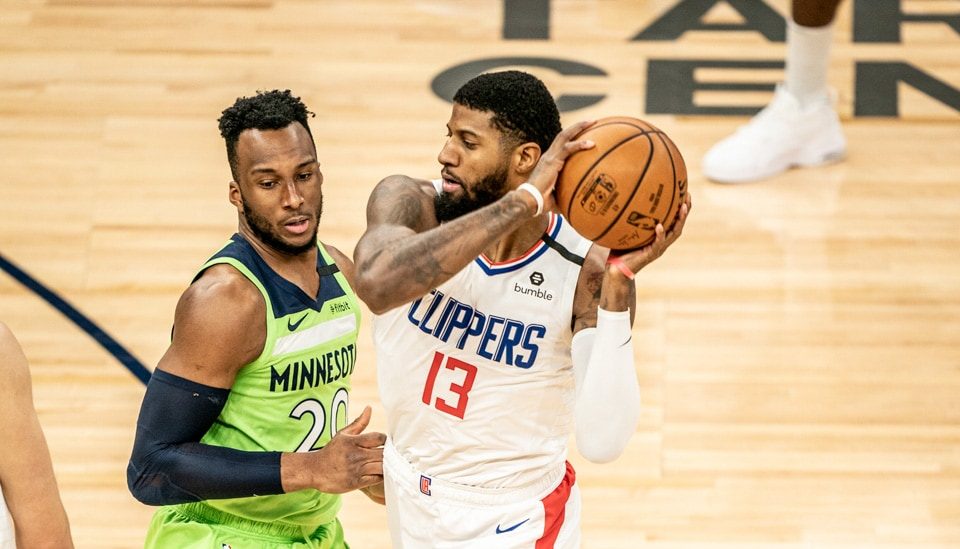 After the worst loss in franchise history, LA will need short memories heading into this week’s games. Read on for a full Clippers vs Wolves game preview.

That loss was a strange game, as the Clippers were without Moe Harkless following the trade deadline but didn’t have Marcus Morris available yet. The Wolves also had an unusual rotation following deadline deals of their own, most notably the Andrew Wiggins-D’Angelo Russell trade, and two-way contract point guard Jordan McLaughlin got the start and notched 24 points and 11 assists. The Wolves made a season-high 26 threes and shot a season-best 59% from downtown, beating their second-highest mark in both categories by a considerable margin (3 made threes and 9%).

It’s still very early in the 2020-21 NBA season. If we keep saying that, it’s because it’s true. These games matter, both in the standings and in terms of quality reps to build confidence and cohesion long-term, but we shouldn’t mistake individual games for having overwhelming significance when it comes to defining this team’s identity or projecting ultimate outcomes for the season.

It won’t take a Clipper historian to remember that the team beat the Lakers on opening night last season, only to fall short in the second round while their cross-town rivals went on to win the title. Patrick Patterson and Quinn Cook featured prominently for their respective teams in that matchup and neither played outside of garbage time in the playoffs. In his last season as coach, Vinny Del Negro led the Clippers to a perfect 16-0 December record… before losing in 6 games to Memphis in the first round several months later.

Eventually, the Clippers’ historically pathetic 51-point loss to the Dallas Mavericks will share footnote status with their opening night win in 2019-20 and perfect month in December 2012. Right now, though, even without overreacting to a single performance, the Clippers should approach their next game with a heightened sense of urgency to make sure they rinse the bad taste out of their mouth and get back on track. After all, every team has bad losses (though we’re all aware that Sunday’s massacre was uniquely miserable). Last season, the Clippers’ response to low moments was seemingly to shrug their shoulders and go “who cares, nothing matters until we see the Lakers in the Western Conference Finals.” While you can’t act like the sky is falling and make drastic changes on account of one regular season game, their current reaction so far feels a little more appropriate: Paul George saying he takes responsibility for the team’s lack of preparedness and will ensure they’re ready going forward, Kawhi Leonard and Marcus Morris sensing the team needs them back in the lineup with minor injuries (both practiced Monday, and Leonard may return to the lineup Tuesday while Morris remains out), Ty Lue scheduling an additional practice on an off day.

In the wider scope of the team’s schedule, this game against Minnesota represents a brief reprieve between sets of games against Western Conference playoff teams: the Lakers, Nuggets, and Mavericks to open the year and the Trail Blazers, Jazz, and Suns in upcoming days. Going 2-1, despite the nature of the 1, in those opening 3 is an outcome any team could be happy with. Similarly, 2-1 in the upcoming stretch (with the Blazers being on the second night of a back-to-back) would be a solid performance. Winning this easier match-up against the lottery-bound Wolves, who are missing their best player, would be a nice bridge. And once they get past Phoenix, the schedule really opens up: 9 of their next 10 games are against lottery teams in a January that represents the soft underbelly of their 2021 campaign.

The Wolves finished 19-45 last season, and while they added some talent–swapping Wiggins for Russell last deadline, bringing in Ricky Rubio, drafting Anthony Edwards with the first overall pick–I just don’t see them having improved their stock enough to get into the top 10 in the conference.

Minnesota has also, as seems to be the case when teams have smatterings of talent but never figure it out, dealt with some bad luck in recent years. After two wins to start the season, including a quality road win against a perennial playoff team in Utah, the Wolves lost Karl-Anthony Towns to a dislocated wrist which will keep him out of the lineup at least this week and potentially beyond. Towns, who is Minnesota’s clear best player, averaged 26.5 points, 10.8 rebounds, and 4.4 assists last season while shooting 41.2% from three on 7.9 attempts per game as a 7-footer. Players like that are inherently irreplaceable, though his presence didn’t necessarily make them less dreadful last year–the Wolves were still just 10-25 when Towns played last season compared to 9-20 when he was out with injury.

It doesn’t help that Minnesota’s roster is severely unbalanced. Look at the way they’ve shed forwards and consolidated guards in the last year:

As a result, you’ve got a team with 4 legitimately good NBA guards in Russell, Beasley, Rubio, and Edwards, an All-NBA center in Towns, and… not much else. They’ll play three-guard lineups with the aforementioned quartet, 6’4″ defender Josh Okogie, and 6’6″ sophomore wing Jarrett Culver, and fill in the gaps with forwards like Jake Layman, Juancho Hernangomez, and Naz Reid. By my count, Minnesota has given 67.4% of their minutes through three games to players 6’6″ and under who are nominally designated as guards. Even if Towns was playing, the Wolves’ forward positions are a nightmare and teams will relentlessly target 6’9″ backup center Naz Reid when KAT sits. In a full game without him, it should be open season against Minnesota’s interior. Anything short of dominating the rebounding and points in the paint battle against the lineup LAC will see tomorrow would be an utter disappointment.

That the Lakers crushed the Wolves early in their Sunday matchup and coasted to a 36-point win is no surprise considering Towns’ absence and replacements, though doing so without even needing Anthony Davis to dominate Minnesota inside is impressive. There’s no reason for the Clippers to not similarly run the Wolves out of STAPLES Center, particularly given their need for an emphatic statement following their evisceration at the hand of the Mavericks two days ago.