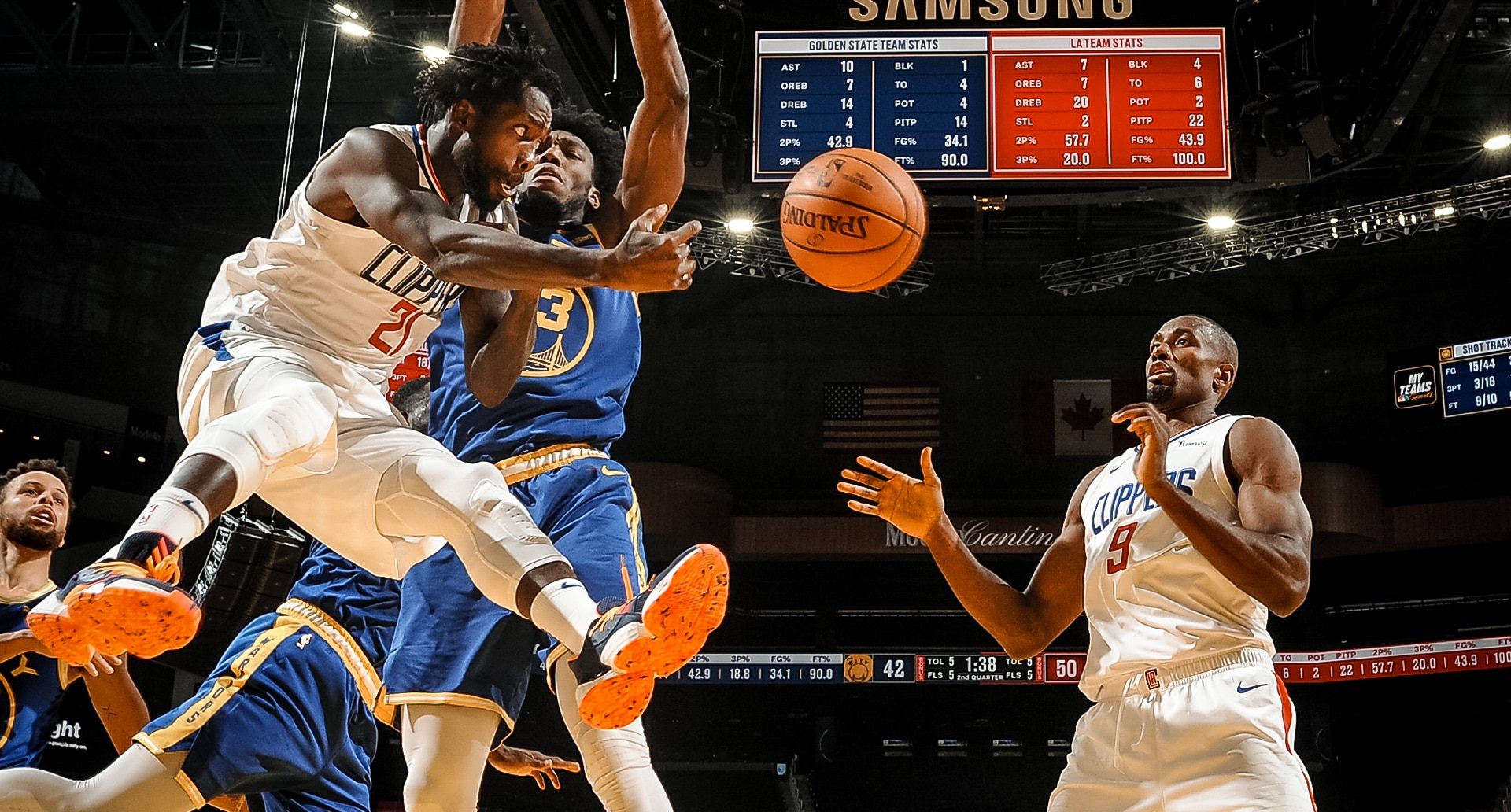 It’s time to dole out Clippers vs Warriors player grades after LAC won the first game in the series between the two this week. The sides will also face off Friday evening in a rematch, so make sure to keep your eyes out for Clippers vs Warriors Player Grades (Part 2) after that one.

For now, let’s dive into a game that the Clippers found a way to win despite an underwhelming overall performance, with the added intrigue of having it be the first night where the team’s rotation was fully healthy–including Marcus Morris, who made his season debut coming off the bench.

Patrick Beverley: A-. Pat followed up a 20-point, 8-rebound, 8-assist performance on Tuesday with 7 points, 3 assists, and 1 rebound on Wednesday. So why the good grade? Look at Steph Curry’s line: 13 points on 5-17 from the field. Sure, it was a team effort–the Clippers overplayed Curry at every turn and forced the other guys to beat them (and they nearly did). But Bev at the point of attack was the centerpiece of an ultimately successful defensive strategy, and he ate up space around Curry while avoiding fouls all night.

Paul George: A-. Here’s what you like about Paul George tonight: after a red-hot start to the season, a cold shooting performance didn’t stop him. He was just 5-15 from the field and 2-6 from deep, but developed an uncommon-for-him determination to get to the rim and free throw line, going 9-9 from the stripe to ultimately finish with 21 points on 15 shot attempts. He also helped on defense, as always, and pulled down 12 rebounds, tied for his high as a Clipper.

Kawhi Leonard: B. It was a night of the good and bad for Kawhi, whose masterful mid-range play and late-game aggression moved an uncertain result into the win column for the Clippers. In particular, it was nice to see “Angry Kawhi” who just bullied the Warriors after a particularly hard foul where Draymond Green hung on to his arm and pulled him out of the air. But a big part of the reason why LAC was in trouble against an inferior team to begin with was their sloppiness with the ball, and Kawhi’s 7 turnovers were the primary culprit.

Nicolas Batum: A-. All this guy did was guard Draymond Green and then switch on to Steph Curry on ball screens. Oh, and he scored 13 points on 3-6 from deep, including back-to-back corner triples to stretch a 3-point lead to 9 in the waning minutes of the game. Slight knock for 0 assists, as the Clippers’ offense simply runs better when Nic is a little more deliberate about getting involved and finding others.

Serge Ibaka: B. Maybe harsh for a 13 point, 14 rebound performance, but probably kind considering my eye test evaluation of his night tonight. The production is undeniable, but I’ve found him to be a bit pedestrian offensively lately, and the Warriors’ undersized backup bigs were largely unbothered around the rim tonight. Eric Paschall had 19 points–some of that came against Zu, who we’ll get to in a minute, but Serge was the center for 35 minutes last night and the interior defense was poor for all 48.

Lou Williams: C. It was a rough night at the office for Lou, who was just 1-4 from the field for 3 points and doesn’t really seem to be getting in to a rhythm this season. It’s good for the team to be less reliant on him and have a better-structured offense. It’s probably bad for the team if he’s getting iced out because the ball is in Reggie Jackson’s hands.

Luke Kennard: B. I thought Luke made a nice impact offensively in this game, making a few plays in the lane and hitting a spot-up corner three when playing with the starters in the fourth. But much like Lou, the ball just isn’t getting into his hands enough. Not only is the three-guard bench unit a disaster defensively, but it’s marginalizing the strengths of important Clippers by spreading the touch/shot distribution too thin.

Marcus Morris: A. I’m giving Marcus a free “A” tonight for two reasons. The first is that it’s his first game back from injury, so some rust is to be expected and critiquing his 3 turnovers feels a little unfair. The second is that he came off the bench behind Nicolas Batum, not because Ty Lue made the difficult decision to demote him, but because he saw how well the current 5-man starting unit was playing and went to Lue and requested to come off the bench so that one of the team’s strengths could stay intact and Morris could try to help fix one of the team’s weaknesses. That’s A-level stuff.

Ivica Zubac: D-. Five fouls in 10 minutes, and a lot of production for Kevon Looney and Eric Paschall on his watch. The three-guard bench lineup might have the worst effect on Zubac of anyone, as he’s left trying to cover for three poor defenders in front of him. In his efforts to do literally everything for the second unit on that end of the floor, he’s falling short and making mistakes on the basics. The second unit looked better in the second half when Lue played a 9-man rotation and kept one of George/Leonard in with Williams, Kennard, Morris, and a center. That lineup should be more viable defensively and hopefully Zu can start to get things back on track.

Reggie Jackson: B+. I think Reggie did his job tonight–nitpick his bad floater all you want, but when he’s 3-5 with 3 assists and 0 turnovers it feels particularly harsh to dock him for one of the two missed shots. The real problem isn’t with his individual production but with his fit. As a small guard who doesn’t defend well, Reggie needs to be the depth guy who plays in place of Patrick Beverley, Lou Williams, or Luke Kennard–not alongside them. This Clippers team is short a wing/forward and they’re using Reggie to supplement that, but the fit just isn’t good. That’s not Reggie’s fault, and he’s been pretty good individually.

Jay Scrubb remains out. Mfiondu Kabengele and Terance Mann both saw a few seconds of play on separate defensive possessions, but neither stint warrants a grade. Patrick Patterson, Daniel Oturu, and Amir Coffey did not play.