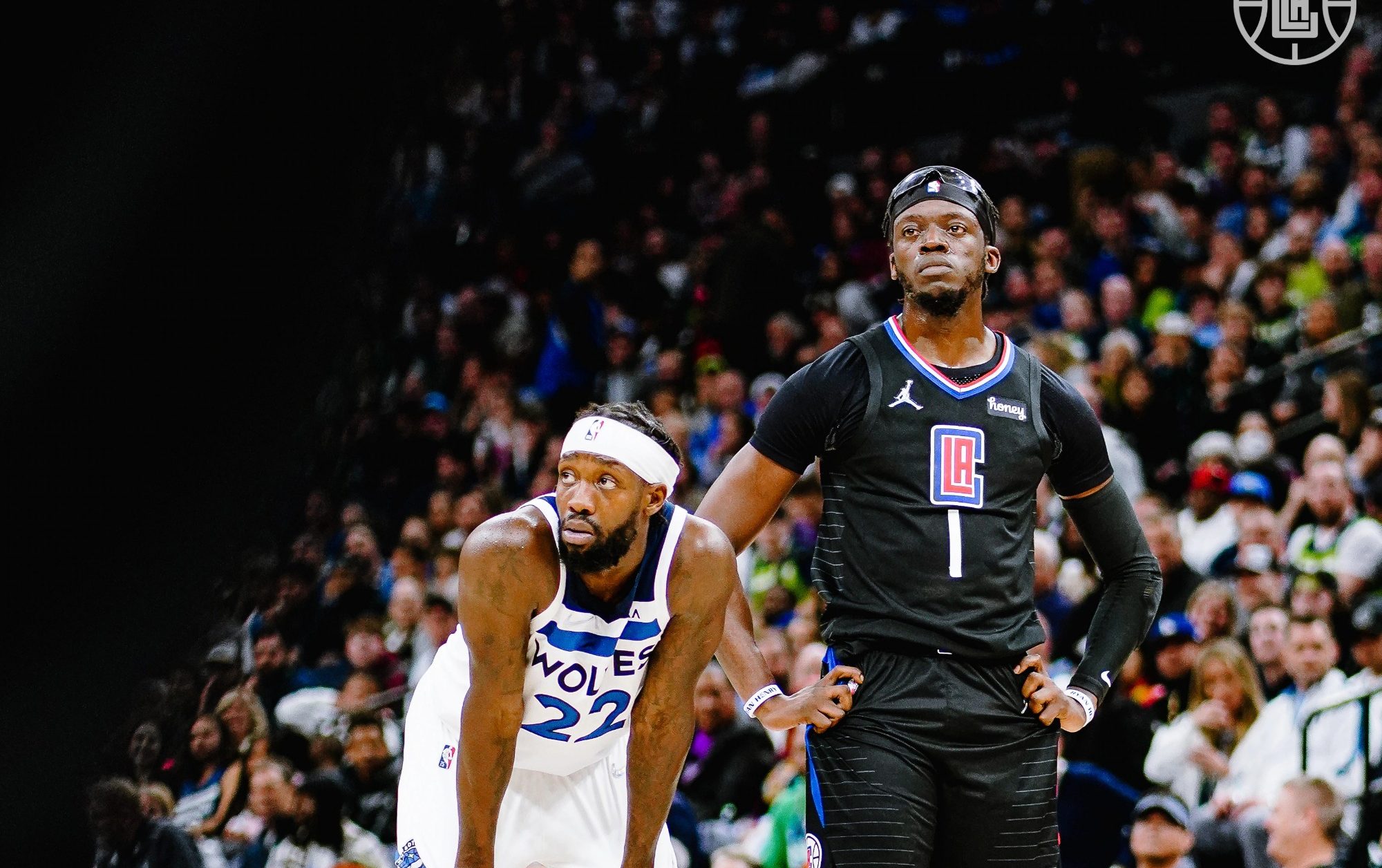 In a game that went off-kilter with a frenzy of fouls all night long, the LA Clippers could not capitalize on several golden opportunities before falling to the Minnesota Timberwolves 109-104 Tuesday night. Paul George put up a game-high 34 points (10-24 FG, 6-12 3PT, 8-11 FT), seven rebounds, five assists and three steals in 41 minutes. Anthony Edwards was spectacular for Minnesota all night long, posting a team-high 30 points (10-21 FG, 5-11 3PT, 5-6 FT) and five rebounds. D’Angelo Russell was right there with him for the Wolves, with 29 points (10-18 FG, 3-5 3PT, 6-8 FT), five rebounds, six assists and three steals. Read on for our full Clippers vs. Timberwolves game recap.

The atmosphere was absolutely electric to start, with none other than the stellar sophomore Anthony Edwards getting things started with a personal seven-point strike. Immediately after, the Clippers responded with a 10-0 run on Reggie Jackson, Marcus Morris Sr. and Paul George getting loose. Easily the story of the frame was the Clippers’ mismatch-doubling scheme on Karl-Anthony Towns working to perfection as the big man finished 0-for-5 from the field with two turnovers and two fouls. PG was solid in his opening stint, putting up an efficient six points, assist and two steals, albeit coughing it up twice. Unfortunately, there was perhaps no individual more impactful on the floor in the first than referee Scott Foster, whose crew put up 11 whistles in the first 10 minutes. Playing the game being presented to them soon enough was Patrick Beverley and Norman Powell. Bev drew the first win, getting a citation handed to Powell while trying to get open off the ball. Getting the last laugh, however, was Norm, who drew a late-clock foul on a recovering Pat to tag him with his third in the period. After a Jaden McDaniels 3 at the buzzer, the Clippers held a 26-20 lead heading into the second.

In what an otherwise decent frame, the Clippers had an absolutely dreadful close, squandering an eight-point advantage with four minutes left. Aside from KAT having four fouls and just two points in the entire half, LAC not only weren’t able to capitalize but fell behind altogether. The process for the most part, was solid offensively, as the Clippers routinely caught Minnesota in rotation and hit the open man for 3. After Edwards went on a personal 8-0 run, however, LAC looked frazzled, missing some decent-quality jumpers and four freebies from the charity stripe. In the final 7:21 of the frame, the Clippers scored just seven points — all from the free-throw line. Meanwhile, D’Angelo Russell broke loose for a 10-0 run to get the Target Center crowd dialed all the way in. Nicolas Batum’s 3 with 2.6 seconds left fortunately ended the drought, but the Wolves still overcame all of their struggles to take a 53-51 lead into halftime.

Out of the break, all eyes were on PG and KAT to see which of the struggling stars could get their act together. Fortunately for LA, things went No. 13’s way. Early on, it appeared to be more of the same as the Clippers opened up with four missed jumpers, a turnover and nearly saw Morris Sr. get ejected with a ticky-tack back-and-forth with Beverley. Where things began to change, however, was the other guys easing the load offensively for George. After seeing a pair of Ivica Zubac hooks and Jackson and Morris Sr. triples go down, PG got into the mix and knocked down his next three treys en route to 17 points in the period. As for Towns, LAC continued to involve him in pick-and-rolls as well as exploit his inability to be aggressive due to his four fouls. The highest point of the period for LAC came once Tyronn Lue went with an all-wing lineup featuring Powell, George, Batum, Robert Covington and Morris Sr. Almost immediately, Batum and Morris Sr. played KAT perfectly into his fifth foul. Another blundered close courtesy of a Malik Beasley 3 at the buzzer soon injected life right back into the building, but LAC nursed a 84-78 lead to the final frame.

The fourth quarter perhaps perfectly encapsulated the Clippers’ issues in this one up to this point. Both teams started off about even, with the slightest of advantages and Terance Mann coming alive causing Chris Finch to take time early to shake things up. As KAT came back in, five fouls and all, LAC soon went small and had a clear objective once again. Getting a nice corner three off of Towns’ switch, however, the star big man soon fouled out on an unprompted loose-ball bump on PG. With the Clippers up seven with 7:34 left, it was time for them to either figure something else out or let go of the rope once again. Unfortunately, the latter happened, with Edwards, Russell and Beverley each getting their much-deserved shines in the postseason spotlight as the Timberwolves locked in the seven-seed.

Up Next: The Clippers will head home to host the winner of San Antonio-New Orleans in the final game of the NBA Play-In Tournament at Crypto.com Arena on Friday, April 12, at 7 p.m. PT.