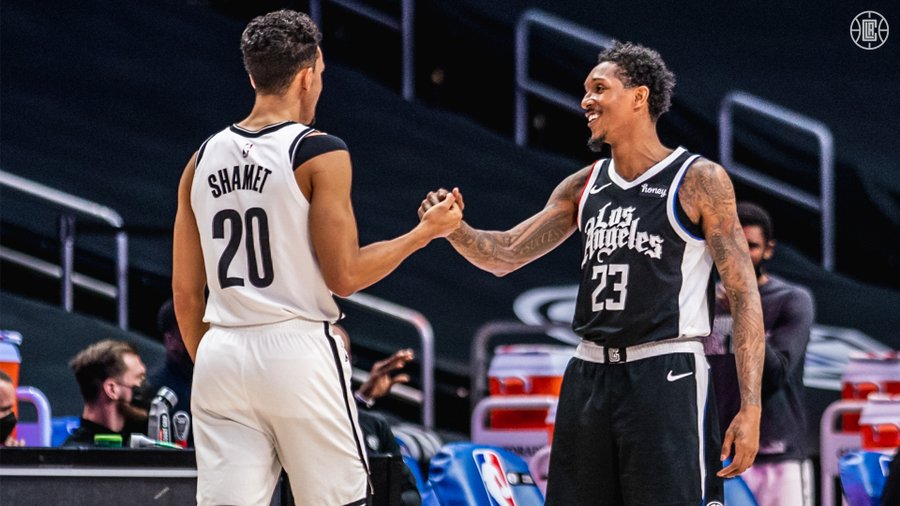 The Clippers fought hard but were ultimately outplayed by James Harden, Kyrie Irving, and the Brooklyn Nets, falling 112-108. Read on for the full recap of the Clippers’ loss to the Nets on national TV in a fairly thrilling contest.

The game started off quickly, with both teams exchanging heavyweight blows. Kawhi Leonard was the guy for the Clips early, nailing a couple threes and showing a level of aggression that he usually only reserves for big games. However, he was more than matched on the other end by Jams Harden and Kyrie Irving, who hit difficult shots both from deep and around the basket. The game was also chippy, with an early foul by Beverley on Harden to stop a fastbreak earning the ire of the Beard. As the quarter went along, the Clippers grew a bit chilly, leading to a 13-1 Harden and Kyrie run. A jolt of energy from Terance Mann then spurred a countering 8-0 run by the Clippers, who led by two after the first period.

With Kawhi finally getting a rest, Paul George took over the mantle of the Clippers’ offensive generator, and he responded with several beautiful midrange jumpers. Unfortunately, while Zu chipped in a couple baskets as well, both Lou Williams and Marcus Morris were off, resulting in a handful of zero-point possessions. The Nets, meanwhile, scored nearly at will, with Harden lofting a variety of floaters over the outstretched arms of Clippers’ defenders. The Clippers’ starters returned, but they actually played worse than the reserves had. Serge Ibaka got beat several times backdoor by DeAndre Jordan lobs, and both he and Nic Batum had several uncharacteristic turnovers. Sloppy offense and mostly bad defense meant that the Nets had a seven-point lead going into the halftime break.

Leonard and George started off the third with several jumpers between them, but the Clippers remained unable to stop the Nets, who continued to get to the rim and finish at will. A Batum missed three led to a Kyrie dunk in transition, and Ty Lue took a timeout with the Clippers down 11. Whatever Lue said seemed to work, if briefly, as a brief spurt of energy defensively and increased ball movement drove a 9-2 surge to cut the lead down to four. His stretch did not last, with Irving and Harden proving too much for the Clippers to handle. Worse, Bruce Brown made several winning, hustle plays to keep Nets possessions alive, and finished a couple tough shots in the paint. The Clippers’ offense stuttered, and only a couple missed Nets shots kept their lead at a mere 10 entering the final frame.

The Clippers’ start to the 4th did not raise the hopes of fans. The offense continued to stagnant with one on one play, leading to contested shots and brutal turnovers. Fortunately, the Nets were only able to score a little bit, as the Clippers’ defense finally tightened up. Ivica Zubac was huge for the Clips, finishing up a couple missed Lou Williams’ shots and then getting two more easy shots at the rim on nice feeds from Paul George. George was the ultimate catalyst, however, draining a tough three and forcing his way to the line to cut the Nets lead down to two. George, unfortunately, was taken out with around three minutes to go due to his minutes restriction, and watched the rest of the gam from the bench. Meanwhile, a hard foul on an illegal screen by Pat Beverley was a huge blow, as it was another turnover and also prompted a really poor challenge by Ty Lue on a clear offensive foul. The Clippers were able to tie the game on a Lou three and Kawhi free throws, but a small lineup out of a timeout (another questionable decision) resulted in DeAndre Jordan getting a tip-in with just 11 seconds left to give the Nets a two point lead. On the Clippers’ critical possession, James Harden performed an egregious flop to earn an offensive foul on what otherwise would have been an easy Kawhi layup. With no challenge, the Clippers could do nothing as the Nets made free throws to ice the game.

Turnovers, Turnovers: Harden flop and poor challenge aside, the real reason the Clippers lost this game was due to turnovers. They had 16 giveaways to the Nets’ 6, and those turnovers resulted in 30 Nets’ points. That just can’t happen against a team as devastating offensively as the Nets – they have enough opportunities to score without giving them extra. Quite a few of the turnovers were virtually unforced as well, and happened due to sloppy ballhandling or miscommunication. Some of that is rust, especially from George, who had six turnovers, but it was still brutal to watch. This was a game the Clippers could have won, especially with the Nets lacking Durant, but unforced errors cost them.

Zu over Serge: While the Clippers’ starting lineup has been great when healthy (I’ll give a bit of a mulligan to the past two games due to the missed contests by Kawhi, PG, and Batum throwing things off), it’s getting harder and harder to justify Serge having a bigger role on the team than Ivica Zubac. After a very slow start to the year, Zu is simply outplaying Ibaka on both ends of the court. His rim-running and offensive rebounding is more valuable than Serge’s shooting, especially because Serge keeps posting up for some reason. And, on defense, it’s just not close as to who makes a bigger impact. Neither closed this one as Ty Lue went small, but Serge played 21 minutes on a night when he was quite bad while Zu played 20 when he was pretty clearly the Clippers’ 3rd best player. Serge has earned some benefit of the doubt, and if he’s the token starter that’s fine, but Zu needs to start playing more minutes than him on a consistent basis.

Off Night for Clippers’ Role Players: This was a very tough night for most of the Clippers beyond Kawhi Leonard and Paul George (who were, as described throughout the recap), the only players keeping the Clippers attached to the Nets. Lou Williams was 2-11, Marcus Morris was 2-7, Nic Batum was 1-6, and Pat Beverley was 2-6 (though he did play quite well on defense). A lot of the missed shots were open, and on a night when some of those fall, the discussion around this game would probably be quite different. However, that’s not what happened, and the lack of support for Kawhi and PG doomed the Clippers on a night when Kyrie and Harden matched them step for step while also getting big contributions from Bruce Brown and DeAndre Jordan.

That’s about it for this recap of the Clippers’ loss to the Nets. Complain about the Harden flop and bad officiating in the comments below, and prepare for the Clippers’ next game against a surging Wizards team on Tuesday.