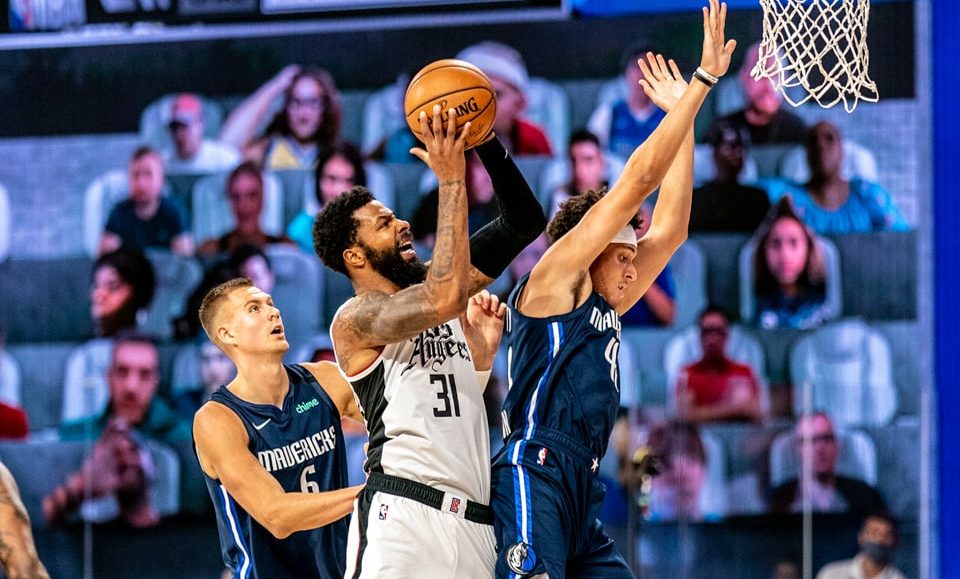 The LA Clippers were able to restore home court advantage, again beating the Mavericks on the road in Dallas. The Clippers dominated from start to finish, and now have some momentum going into Game 5 on Wednesday. Before we get to the full recap of the Clippers’ Game 4 win over the Mavericks, however, here are a few updates that came in between our preview and tip:

After taking the first punch in the first three games, the Clippers landed the opning blow of Game 4. They would end the first quarter with a nine point lead, but they led by as much as 12. The Clippers would then go on to win the second quarter by seven, giving them a 16 point lead at half. Kawhi Leonard and Paul George – once again – carried the offensive load, with 17 and 18 first half points respectively. Reggie Jackson and Nic Batum each added seven points in the first 24 minutes.

The Mavericks were still cold to start the game, but they did get a spark from a Rick Carlisle adjustment: bringing in Boban Marjanovic early to get the Clippers off balance and disrupt Ty Lue’s rotations. And, it worked. Boban leaked out for a transition layup and eventually forced the Clippers to abandon small-ball and bring in Zubac earlier than planned. At half time, he had the best +/- for the Mavs.

The rest of the Mavericks, however, were not as effective in the first half. First, Luka, whose shoulder/neck injury was apparent throughout the game, had an efficient 15 points (7/15 shooting) but was not as aggressive as we have seen him so far this series. Moreover, except for Kristaps Porzingis, who started off hot and finished the first half with 12 points, the Clippers held all of the other Mavericks to five or fewer first half points. The Clippers defense certainly looked tighter and more confident, but the Mavericks also missed a bunch of shots that they were making in the first two games.

In the third quarter (historically a terrible quarter for this franchise), the Clippers came out very strong, scoring eight unanswered points in the first three minutes. And those eight points were basically the difference between the two teams in the third, as the Clippers finished with 21 points and held the Mavs to just 15. Marcus Morris, Sr. also hit two nice shots, grabbed three rebounds, and had an assist in the third quarter. The rebounding was especially key, and the Clippers overall were stronger on the boards tonight. Although the Mavericks grabbed 10 offensive rebounds, the Clippers had nine of their own and even out-rebounded the Mavs overall, 53-41.

The fourth quarter was largely uneventful, even though Clips Nation was pretty tense until the final horn blew.

But, in the end, the Clippers were able to hold the Mavericks off and even got to let the bench get some burn in the final four minutes of the game.

What’s up with Luka Dončić?: After the game, Luka said he was “100%” but that clearly was not the case. He finished the game with 19 points on 9/24 shooting and showed flashes of the defense-carving he has proved capable of in the first three games of the series. He was 1/7 from three, though, as well as 0/5 from the free throw line. Going forward, regardless of what Luka’s injury status is, the Clippers need to continue studying what has worked defensively to contain him in these last two games because he is still the engine of their offense. I personally thought Batum did a pretty good job on him tonight, without looking back at the film.

What to do with Ivica Zubac: I was honored to learn that Ty Lue is an avid 213Hoops reader when I saw that he was starting Batum and trying to match Zubac with Luka’s rest. But Zubac had a tough night nonetheless: he was 2/5 from the field and had just seven rebounds in 17 minutes before fouling out. Hopefully, Ty Lue can continue tinkering with the rotations and gameplan to maximize Zubac in a way that is not simply playing him less. With the Mavericks’ size, they have the potential to devastate the Clippers’ small-ball lineup.

The Mavericks Shooting: The Mavs were 34.8% from the field and 16.7% from three tonight. Sure, the Clippers’ defense has been better over the last two games, but they are also simply missing shots they were making earlier in the series. The Clippers should assume the Mavs will get back to their average in Game 5 and plan accordingly.

That about does it for this recap of the Clippers’ Game 4 win over the Mavericks. Celebrate in the comments below!