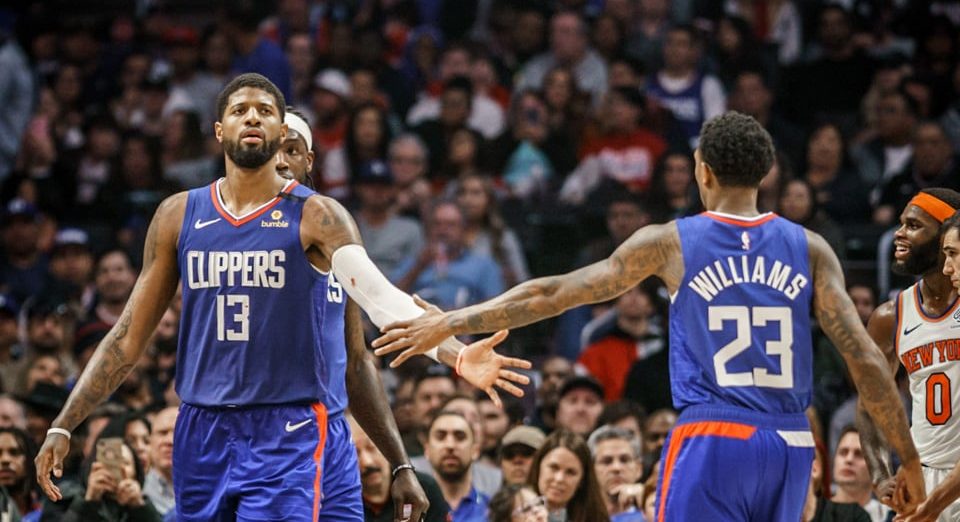 Despite a last-minute injury for Nic Batum, the Clippers continued their winning ways on Sunday at Madison Square Garden and improved to 16-5 on the season and 3-1 on this road trip. Read on for our full Clippers vs Knicks player grades.

Reggie Jackson: A-. Reggie had a really solid and efficient all-around game, with 18 points on 6-12 shooting, 3-6 on threes, 5 rebounds, 3 assists, and 0 turnovers in his 26 minutes of court time. It is incredibly, incredibly nice to be starting your third string point guard and having a performance like this be unexceptional based on how he’s done in the last week.

Paul George: B-. It wasn’t a great shot-making night for PG, who had 17 points on 7-16 shooting, 8 rebounds, and 5 assists. He wasn’t bad by any means, but if PG has a more normal scoring night this game probably gets blown open well before it did–and against a better team, like Brooklyn on Tuesday, the Clippers might not be able to put up a huge offensive performance without Paul’s firepower.

Kawhi Leonard: A-. Kawhi had a fantastically efficient night, putting up 28 points on 15 shots as he got 11 free throw attempts and made all of them. In the second half, he had 16 of his points and shot 5-6 from the field. And, of course, he was dominant defensively.

Patrick Patterson: A-. Patterson realitistically did everything you could possibly want him to do as a last-minute fill-in starter, especially as he was red-hot offensively and put up 13 points on 5 shots, hitting all three of his threes and converting on two floaters as well. The minus comes because part of the rationale in these grades has been to not overreact to made and missed shots so much as look for good process and team results when a player in on the floor. Patterson’s offense was great process tonight, even if he hadn’t been perfect from the field, but he was on the floor for some bad team defense with the starting unit.

Serge Ibaka: A-. Similarly to Patterson, Serge had a phenomenally efficient offensive performance while getting dinged a bit for team defensive issues. He finished with 15 points on 5-6 shooting, but had only 2 defensive rebounds in 24 minutes and is clearly the inferior defensive center in the Clippers’ rotation.

Marcus Morris: B+. Marcus had a good offensive performance, taking 6 of his 8 shot attempts from deep. He split those long balls, converted one short jumper in the lane, and missed one mid-range shot. If Marcus routinely puts up 11 points on 8 shots in 28 minutes, he’ll be a very effective and consistent bench player–and if he takes 75% of his shots from beyond the arc, he’ll make Robert Flom very happy with his shot selection. But he didn’t do much else–3 rebounds in 28 minutes and no assists, blocks, or steals.

Ivica Zubac: A-. Gotta give it up to the big man for not just having 8 points and 7 rebounds (including 3 offensive) in 23 minutes, but also tallying 4 assists without a turnover. A 50-50 minutes split with Ibaka is fine on nights like tonight when Serge has it going, because the floor spacing is a really nice complement to Zu’s interior play. But when Serge doesn’t have his jumper going… Zu’s just been the better overall player.

Lou Williams: B+. Lou seems to be finding a niche role as a more efficient off-the-dribble playmaker in smaller doses than he’s used to seeing off the bench, and his offensive creation has really helped create good shots for others in key moments the last few games. He had 9 points, 5 assists, and 2 rebounds in 23 minutes tonight–with any luck, he’ll find a better rhythm shooting the ball soon.

Terance Mann: C. The Clippers got a pretty big nothing from T-Mann tonight, with 4 points, 1 assist, and 1 rebound in 16 minutes. Honestly, I’d be inclined to give him a NG, but not prodividing real material for evaluation in 16 minutes of court time is itself something worth evaluating.

Luke Kennard: C-. I’m not willing to move Luke out of passing territory for a night where he didn’t have any major screw-ups and put together a decent low-volume line: 6 points and 3 assists on 2-2 shooting in 11 minutes. But I also think he deserves a huge knock for only playing 11 minutes, as Ty Lue had him on a short leash in the first half and pulled him quickly when he passed up a good look from deep early in his first shift.

Mfiondu Kabengele and Amir Coffey got in for a few possessions of garbage time, but not enough to evaluate. Patrick Beverley, Nicolas Batum, and Jay Scrubb were all sidelined with injuries. Daniel Oturu was inactive, possibly because he’s preparing to head to the Orlando bubble to join ACCO for their shortened G-League season.