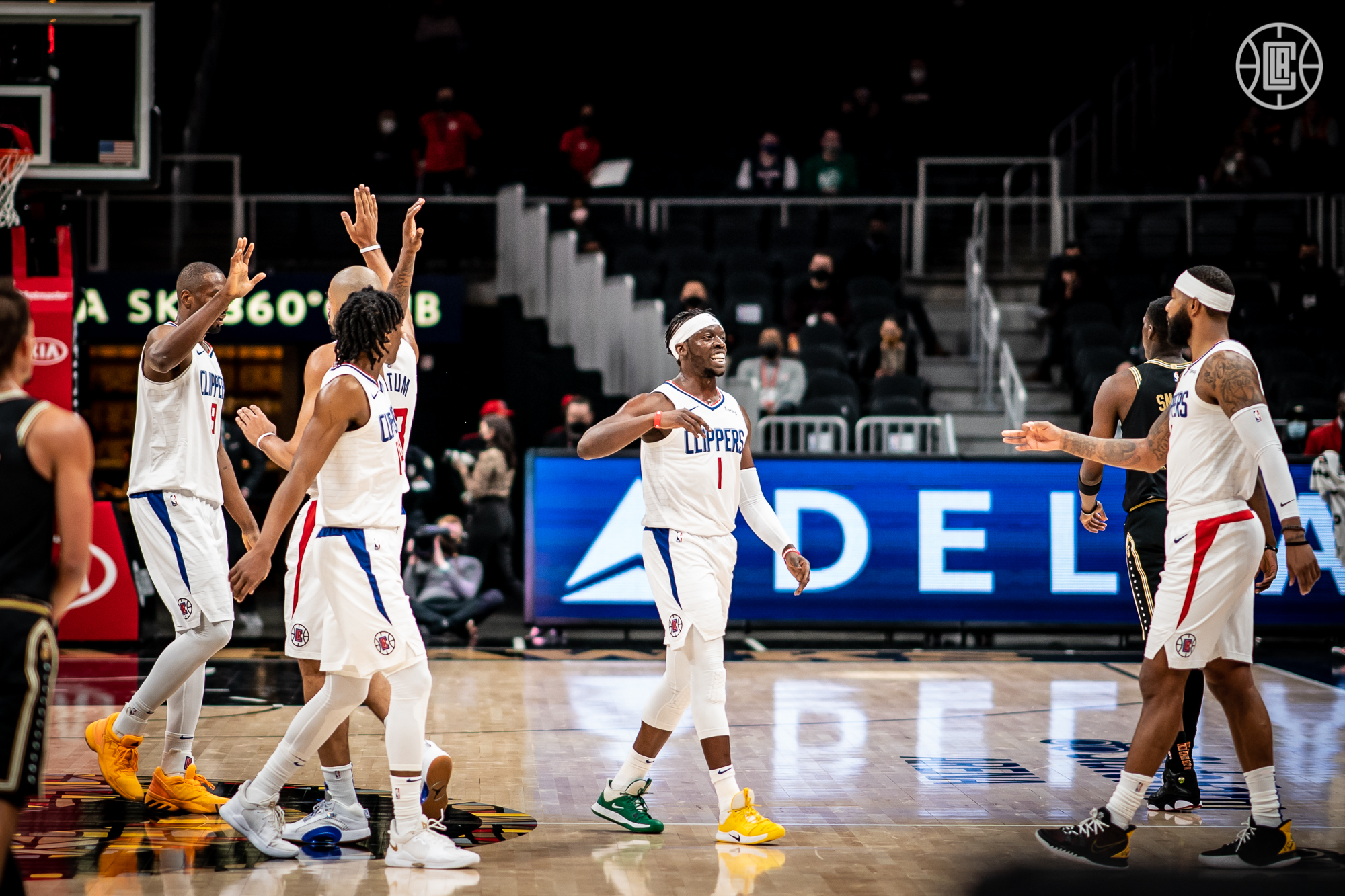 The Clippers fought hard without Kawhi Leonard, Paul George, and Pat Beverley, but fell to the Hawks 108-99 after late game scoring outbursts from Trae Young and Kevin Huerter. Check out the full recap of the Clippers’ loss to the Hawks below.

The short-handed Clippers started off the game running their offense through Serge Ibaka. Rather than getting shots mostly through pick and pops, as he has the bulk of this season, Ibaka received the ball in the post and rolling to the rim. And, surprisingly enough, the Clippers were able to generate some good looks this way. On the other end, however, Serge was less effective, with the Clippers giving up several offensive rebounds and easy buckets in the paint. The bench unit began trickling in, and the already stodgy offense became even less effective, with Lou unable to connect on good looks. Yet, despite the continued bricks, the Clippers trailed by a mere point due to their stout defense.

The Clippers’ perimeter players continued their errant ways in the 2nd quarter, with Amir Coffey offering virtually nothing on that end, and Lou Williams remaining cold. Fortunately, Ivica Zubac followed in Serge’s footsteps, and showed up well on both ends of the court. Zu’s scoring and a couple Marcus Morris midrange jumpers kept the Clips afloat, but they weren’t able to extend their lead much even with the Hawks being cold. The starters came back in, and the offense got going a bit more, as Luke found Serge with a nice pass for three, and then Reggie found the big man running the court in transition. Combine that with a couple steals from Luke Kennard and the Clippers found themselves with a five-point lead at halftime.

Unfortunately, that lead quickly slipped away from them. The Hawks finally started to get more penetration on the Clippers’ fatiguing defense, and the Clippers looked equally as sloppy on the other end. Even some incredible defense by Mann to force steals couldn’t result in easy points. Meanwhile, Ibaka, after looking so sharp in the firs half, was getting dominated by Clint Capela on both ends. Fortunately, Lou was finally able to get going with seven points down the stretch of the quarter. Unfortunately, Trae Young also got going, torching Nic Batum a couple of times off the ball. This resulted in the Clippers’ lead getting flipped, with the Hawks maintaiing a six-point margin entering the 4th.

The Clippers started off the final period with a quick 6-0 run capped off by a massive dunk from Ivica Zubac. The Lou-Zu pick and roll was in full effect, and the Clippers go positive results several possessions in a row. The bad news was that the hitherto quiet Kevin Huerter drained a couple threes when Amir Coffey sagged too far off him, and the Hawks regained their advantage. With around 8 minutes to go, Ty Lue brought back Luke Kennard alongside Lou and Reggie Jackson, seemingly abandoning defense for more firepower. Oddly, the Clippers failed to get anything going on offense, but the defense held up, keeping them vaguely attached. Unfortunately, the rest of the game played out similarly, and while Reggie Jackson did his best with a couple of floaters, a deep Trae bingo and some ref-baiting free throws put the game out of reach. And really, that is a solid recap for the game, with good fight and effort from the Clippers, but just too much talent and firepower from the Hawks.

Terance Mann’s Best Game: Terance Mann might have been the only Clipper who played well above expectations tonight. While he only finishd with 10 points on 4-8 shooting, he pulled in 9 rebounds (second most on the team), and played pretty close to spectacular defense at times. His length and size dogged the Hawks’ wing players, and he was able to avoid a few fouls (though he did pick up 5). Really, he just looked like he belonged, and the Clippers’ defense and energy sagged when he was out of the game. The lack of shooting is a legitimate problem, and it gummed up the offense a fair bit while he was out there, but he’s shown that he’s at the very least someone the Clippers can count on for regular season minutes if needed.

Reggie Jackson Shines: While Mann played above his paygrade, Reggie Jackson was probably the Clippers’ overall most effective player. He scored 20 points on 16 shots, collected 7 rebounds, dished 8 assists, and gave away only 2 turnovers. Reggie had a couple baffling shots, and his two turnovers were particularly dreadful, but overall he ran the offense to the best of his ability and competed hard on defense. He even made a couple good decisions in transition! He’s not perfect, but Reggie has played his role well this year, and deserves kudos for being ready to go from DNP-CDs to 39 minutes as a starter.

Serge and Zu Continue Strong Play: Serge Ibaka and Ivica Zubac both played well in this one, even though they each had some poor stretches. Serge powered the offense early with eight first quarter points (though he only scored seven thereafter) and also made some nice passes. Zu, meanwhile, had some nice rolls to the rim off passes from Lou Williams, and grabbed 10 rebounds in just 18 minutes. Neither was great defensively, as Capela largely outplayed Ibaka in the paint and Zu sagged too far off shooters at times, but Ty Lue probably should have closed with them together on the court in this one.

The Limitations of Nic Batum: Maybe this game was a glimpse into Hornets-Batum. Despite playing 33 minutes, Batum felt largely invisible. He didn’t have any glaring gaffes, and had an ok statline with 5 assists and 4 rebounds, but really didn’t make his presence felt. In short, he’s a nice ceiling raiser with very good players around him, but is much less effective when forced to carry more of a load. And that’s fine! The Clippers don’t need the latter from him. Still, considering how good he’s been this year, this was a disappointing effort.

The Lou/Luke Conundrum: Neither Lou Williams nor Luke Kennard played well in this game. Clippers’ twitter seemed more down on Lou, who was 4-14 for 11 points and had 3 assists to 2 turnovers, but I was more disappointed in Luke despite his somewhat superior numbers (13 points on 5-13 shooting), 2 assists to 0 turnovers. Luke’s threes both came off the catch, and his forays at creating opportunities largely did not work out. He just can’t seem to work himself free much off the dribble, and when he does, he’s seemingly hesitant to take advantage. Luke’s also clearly just not as gifted a passer or playmaker as Lou is yet, and can’t generate open looks for others. In short, he’s similar to Batum in that he’s a nice fit with great players who can create for him, but he’s not good enough to carry a bench unit yet.

Well, that’s about it for this recap of the Clippers’ spirited loss against the Hawks. Hopefully the Clippers have at least one of Pat Beverley, Paul George, and Kawhi Leonard against the Heat on Thursday. If not, that game will probably be similar to this one.