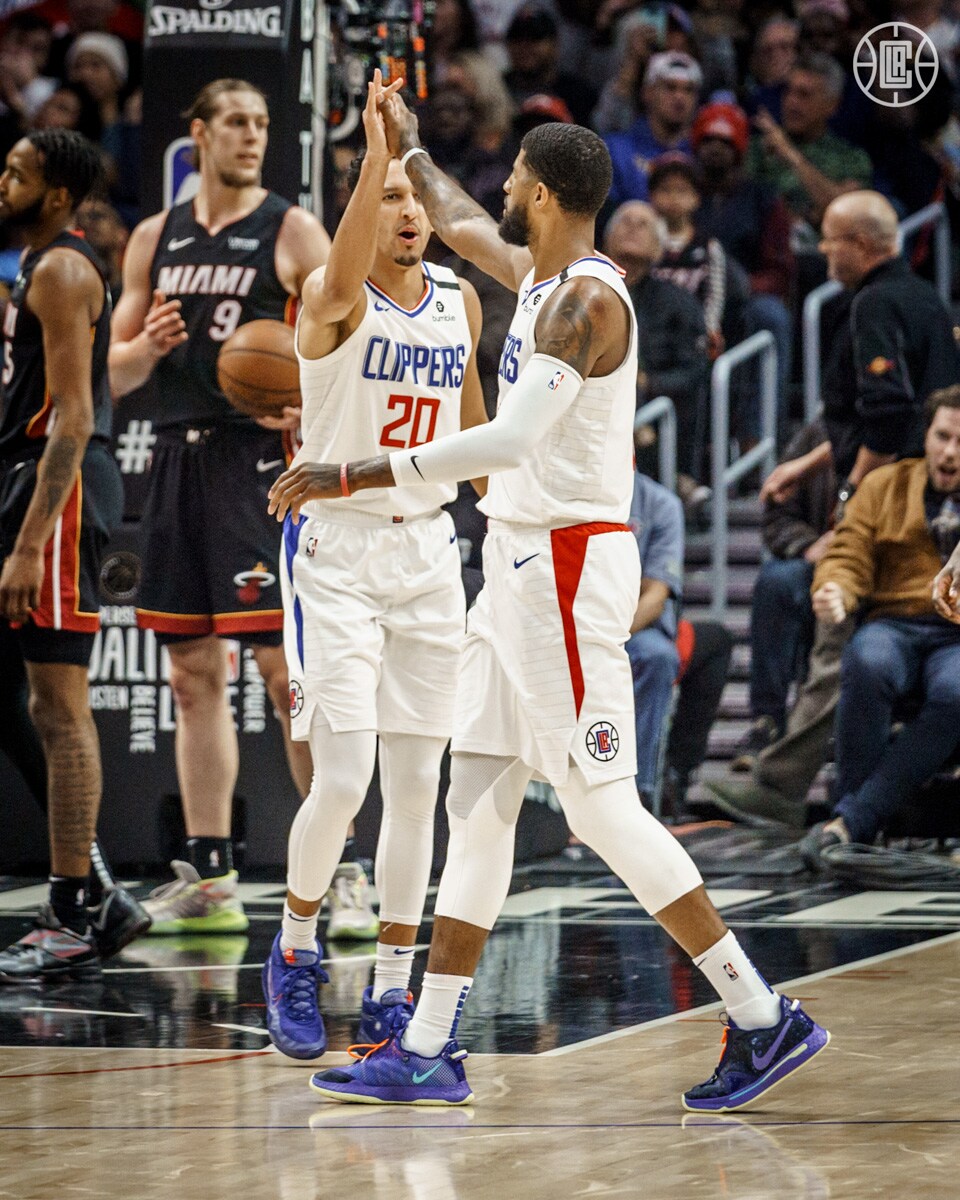 Clippers Lose Iguodala to the Heat but Win the Game, 128-111

Mere hours before tip-off, the Miami Heat reportedly acquired and extended rumored Clipper-target Andre Iguodala. This news was just one transactional imprint upon a game distinctly colored by trade-deadline intrigue.

The Clippers received revelatory performances from Landry Shamet and Ivica Zubac to complement the usual star turns from Kawhi Leonard and Paul George in a fire-bombing 128-111 victory over the visiting Heat.

Recent reports indicated that the Knicks have sought Shamet in return for Marcus Morris, and while the second-year guard has been labeled untouchable in those talks, he emphasized his serious potential by scoring 14 of his 23 points in the fourth quarter. (You know, in case there was any doubt.) Shamet blitzed the Heat with 10 straight points at a critical juncture to slam a door the visitors were cracking slightly.

Shamet’s six made threes also paced the Clippers in a record-setting shooting performance. The Clippers addressed Miami’s zone defense with a long-range barrage, establishing new franchise marks for both threes made (24) and tried (54). Their 27 three-point heaves in the first two quarters made franchise history for a half.

Zubac, still playing under the pressure of near-daily rumors of his team’s search for an alleged upgrade at center, demonstrated his burgeoning pick-and-roll chemistry with Kawhi while expertly supervising the rim on defense. Much to the frustration of everyone but the opposing Heat, Zubac sat for too-long stretches in the second and fourth quarters, but his healthy box-score line (12 points, 8 rebounds, 3 blocks, 6-6 FG) and gaudy +14 rating piled on the evidence that the young Croatian should be playing more frequently.

Kawhi finished this game sporting the shiniest plus-minus rating (+24 in 31 minutes) and controlled it with a pace so deliberate you could mistake it for being at half-speed. Kawhi scored a modest 14 points, with 10 of his 13 field goal attempts coming from deep, but with nine assists and seven rebounds he flirted (sorta) with his second career triple-double less than two weeks after the Heat gave him his first.

Kawhi’s mastery of the offense was particularly crucial in the first half while Paul George sat with foul trouble. George picked up two fouls in his first five minutes and his third early in the second quarter. Fortunately, the long-limbed swingman returned to lead the Clippers in an explosive third quarter that flipped the score from a three-point halftime deficit to a 12-point lead at quarter’s end. George finished with 23 points, 10 assists, and a sparkling 5-for-7 mark from outside in just 26 minutes.

For the Heat, first-time All-Star Bam Adebayo starred across 40 minutes, showing off his versatile skillset by burning Clippers off the dribble and recording a nifty 22/11/6 line.

Derrick Jones Jr. began his dunk contest preparation early, sailing through the vast airspace conceded by the Clippers’ reserves. Jones led all Heat players with 25 points on 10-of-12 shooting, and that kind of conversion rate doesn’t come without a little generosity from your opponent.

Jimmy Butler was largely content to be the playmaker, not unlike his counterpart, Kawhi, recording seven assists but just 11 points before exiting with a shoulder injury in the third quarter. If his absence is to be a prolonged one, the Heat, already without Tyler Herro, Meyers Leonard, the reportedly traded Justise Winslow, and possibly soon-to-be-traded James Johnson and Dion Waiters, will be scouring the G-League for even more players.

Miami deployed just eight players for all the meaningful minutes in this one, and 17 of those minutes went to recently recalled Gabe Vincent. Vincent, who entered the game with just a single career minute played, announced his activation from the Pat Riley/Erik Spoelstra role-player factory with three consecutive three-point splashes. (Then he quickly returned to Earth — he didn’t make another bucket.)

The Heat, then, will eagerly welcome any and all new additions tomorrow to bolster their flagging roster. The Clippers, who earned their third straight victory, may also look substantially different in a few hours time. It’s doubtful that this one game swung the front office’s perception of any particular player, but performances like these may have provided one final push.