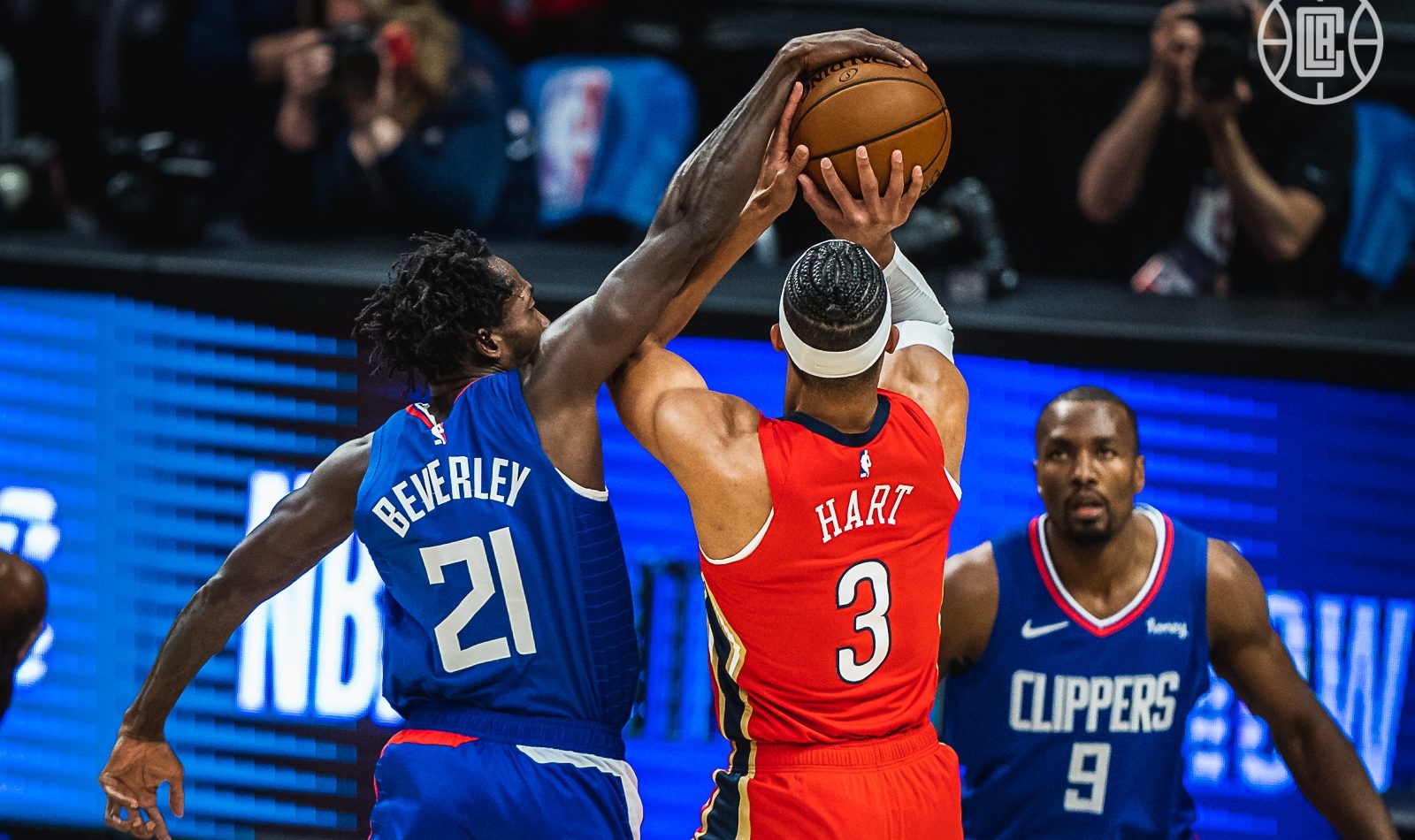 A pedestrian basketball game ended with a whimper, as the Clippers did just enough to fend off an extremely shorthanded Pelicans squad. New Orleans came into the night missing three starters: guards Eric Bledsoe and Lonzo Ball, as well as forward Zion Williamson. Reserve guard Nickeil Alexander-Walker, the 17th overall pick in the 2019 NBA Draft, gladly stepped into the limelight, putting up a career-high 37 points on 15-32 shooting. Honestly I don’t fault the Clippers too much for NAW’s night–sometimes you just have to tip your cap to a young guy coming in as an injury replacement and showing why he deserves a bigger, more consistent role.

The Clippers did enough, considering Alexander-Walker’s outburst, to fend off the Pelicans and win the game. They built and defended leads, even as the Pelicans strung together some second-half runs consisting of fairly unlikely shots, and never really put the game in doubt, even when the margins shrunk.

In the first half, the Pelicans hung with the Clippers mostly with a huge offensive rebounding advantage. They had 10 to the Clippers’ 0 through the first 20 minutes of the game. While the Clippers out-executed New Orleans early on and defended the Pelicans well, holding them to 37.2% shooting from the field in that 20-minute start, NOP had 43 shot attempts to LAC’s 30. That type of volume advantage gave the Pelicans a massive margin for error in efficiency, keeping the game close.

But the Clippers went on a tear to close the half, actually collecting defensive boards and closing the period on a 21-4 run in the final 4:01 of the second quarter. It was their three-point shooting that led the charge, as they were 11-20 from deep. And no, they weren’t “bailed out by a hot shooting night,” nor did they “settle for jumpers instead of getting to the rim.” The Clippers created a bunch of great, wide-open looks for quality three-point shooters by getting into the lane, forcing the Pelicans defense to collapse, and kicking the ball back out to open shooters. As Paul George said after the game, the team’s top priority is attacking the paint, and then finding shooters for threes is just based on making proper reads based on the defense. New Orleans doesn’t allow a league-high 43.9 three-point attempts per game to their opponents by accident; they force teams to kick the ball out and the Clippers, with a rotation full of 40%+ three-point shooters, were right to comply.

When the Clippers struggled offensively in the third quarter and New Orleans cut into the lead, it wasn’t because they went cold from deep but rather because they stopped executing their offense to create those good three-point looks. They take more of their shots from 10-16 feet than any team in the league (13.8% of their attempts were coming from that range entering tonight) despite making just 38.8% of those jumpers, and that trend emerged again in the third quarter. Take a look at their third-quarter shot breakdown:

Obviously, you want to get to the rim whenever you can. And obviously, you can’t over-rely on long jumpers without suffering when you hit a cold spell. But the Clippers don’t over-rely on those shots–their shot distribution has them dead average in terms of the percentage of their attempts that come from beyond the arc, at 15th in the league. Where the Clippers fall into ruts is taking too few threes, settling for mid-range jumpers instead of moving the ball. In the fourth quarter, the Clippers converted more but maintained a similarly mid-range-heavy shot distribution. Their offensive success has been far more sustainable when they work possessions and make extra passes than when their stars take the types of contested pull-ups that they’re perfectly capable of making, but also perfectly capable of getting whenever they want. The old saying about “passing up a good shot for a great shot,” as ESPN’s Mark Jackson said on the broadcast tonight, certainly rings true for these Clippers.

While the Clippers’ execution lagged, the Pelicans pulled close by making some tough shots of their own. They were 9-15 on looks outside the restricted area but inside the three-point line tonight, despite most of those attempts being well-guarded by the Clippers. That was largely the work of Nickeil Alexander-Walker, who got 10 of his 15 buckets in the second half and was absolutely cooking offensively. Not to dismiss NAW’s obvious talent, but he’s a 37% career field goal shooter on over 300 attempts–sometimes random guys have big nights, especially when multiple starters are out and reserves are thrust into bigger-than-normal roles. I know it feels like this is a constant with the Clippers lately, from Patty Mills to Steph Curry to Zach LaVine (obviously Steph and Zach aren’t random but they both had extreme stretches bombing the Clippers from deep), but part of a marathon NBA season is rolling with the punches, sticking to your stuff, and not overreacting.

You would have certainly liked the Clippers to win this game going away, especially considering New Orleans’ long injury report, but sometimes you just play the game in front of you and hope to put a tally in the W column. The Clippers did just enough to fend off the Pelicans, and are now in sole possession of second place in the West heading into Friday’s game against the Sacramento Kings.