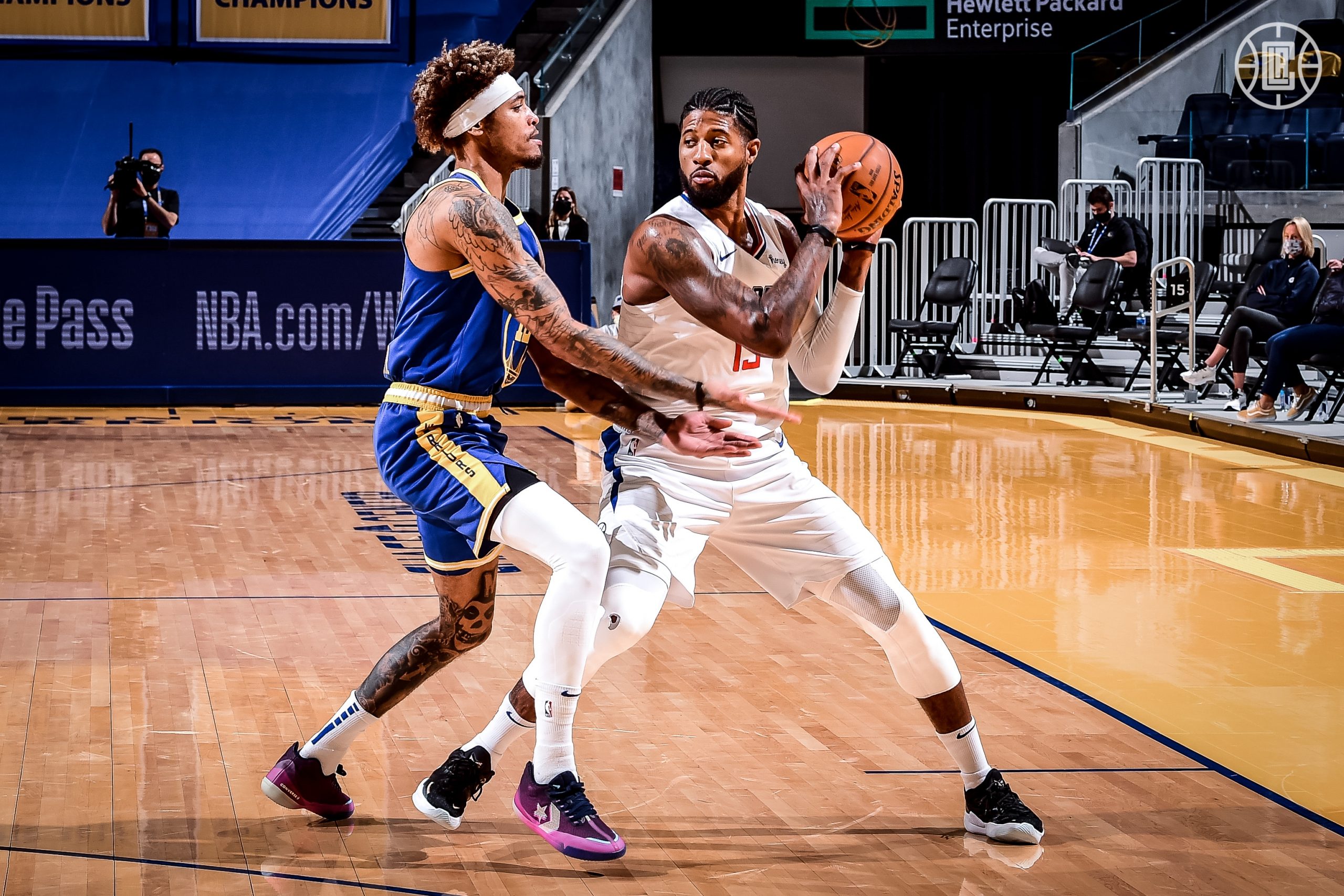 Clippers Fall to Pieces as Warriors Salvage a Split, 115-105

Two nights after winning ugly, the Clippers found a way to lose uglier and fall to the Golden State Warriors, as the Dubs erased a 22-point third-quarter deficit with a 34-6 run to send the Clippers home and Head Coach Tyronn Lue back to the drawing board.

If you switched to Netflix with the Clippers leading 85-63 and just three minutes remaining in the third quarter, then congratulations, because I assume you will sleep more soundly than me.

The Clippers coughed up a 22-point second-half lead with offensive impotence and defensive incoherence, handing the ball to an igniting Warriors squad and dropping the second of this two-game set, 115-105.

Shall we begin with the bad? For the final 15 minutes of game action, the Clippers could do little right. They turned it over 11 times in that stretch, 10 when it really counted. They replaced active hands with upturned palms. All of this while the Warriors gave no quarter, getting bombs from Stephen Curry (of course), Eric Paschall (sure), Damion Lee and Brad Wanamaker (uh), and a final head-shaking dagger from Andrew Wiggins. Ice met fire and made a meltdown.

The Warriors improved to 5-0 in Steph’s 30-point games, and tonight he was incendiary, recording 38 points and 11 assists and splashing nine of 14 threes. Even more impressively, Curry did all that while being stifled for much of the first half, only breaking loose on occasion. The Clippers’ built their lead largely by throwing the kitchen sink and all their other household appliances at the Warriors’ star and watching complementary players fail to take up the dare.

A quick glance at the box score will turn up many culprits for tonight’s loss, especially with minus-20 or worse figures leading like bloody fingerprints to the Clippers’ four favored reserves.

Marcus Morris, in his second appearance of the season, made just one field goal in seven tries. He short-circuited possessions with ill-advised midrange shots, and while it’s extremely early to rush to judgment, one may wonder whether his prominent role with the bench unit will feed his more questionable habits.

Meanwhile, Ivica Zubac continues to play like an off-brand version of his former self, wearing similar packaging to last year’s vintage while providing little of the quality. Lou Williams had as many turnovers (three) as field goals, and Luke Kennard mixed too many puzzling decisions into his sharpshooting cocktail.

That would lay too much blame at the bench’s feet though, and despite solid enough statistics, Kawhi Leonard and Paul George deserve their share, undoing their first 30 minutes or so of excellent work.

George was particularly excellent early, leading the Clippers into the half with 17 points, five assists, and a perfect 4-for-4 mark from three. He would finish with just 25 points and seven assists, as neither he nor Kawhi could successfully tow the sinking bench unit in Lue’s second-half try at a staggered rotation.

Kawhi continues to monopolize possessions for his midrange game, which is only problematic when he misses, which this masked version appears to be doing with more frequency. His temporary waywardness prolonged the Clippers’ second-half drought, and his usual surehandedness dissolved with the rest of the team’s. He would finish with 24 points, a team-high seven made free throws, and two steals.

Want some good? Patrick Beverley was good, pulling down three offensive boards that felt like 30, winning a jump ball over ten-foot tall James Wiseman, and generally making a nuisance of himself. Ignore his seven points for his tied-for-team-high plus-14 at your own risk.

Serge Ibaka had another prolific offensive game, showing his ability to toggle between pops and rolls to the tune of 19 points and a couple of emphatic screams.

Nicolas Batum continues to be the team’s secret sauce, flavoring all that is good with savory touch passes and sweet shooting from his favored left corner. He finished with 10 points, six boards, six assists, two steals, and countless stolen hearts.

You know what else was good? The Clippers, for much of this game. The offense flowed, sweet and crisp like champagne. 15 of the team’s 23 assists came in a purposefully democratic first half. They ably fended off Warriors’ runs until, well, they didn’t.

For the Warriors, Andrew Wiggins wasn’t exactly good, but he was aggressive. He made up for his limited toolkit with extra gusto, driving to the basket and grinding for 16 points. He and Paschall (12) were the only non-Steph Warriors to score in double-digits.

The last good thing? It’s game 10, not game 70. Dismaying as it was, this game revealed warts we already knew were there. In the standings, it will reflect as just another loss, and with time (and adjustments), it may indeed be no worse than that. In all, it’s a loss that shouldn’t have been, but in a chaotic season, there will surely be more of those.

The Clippers return to action on Sunday against the Bulls.