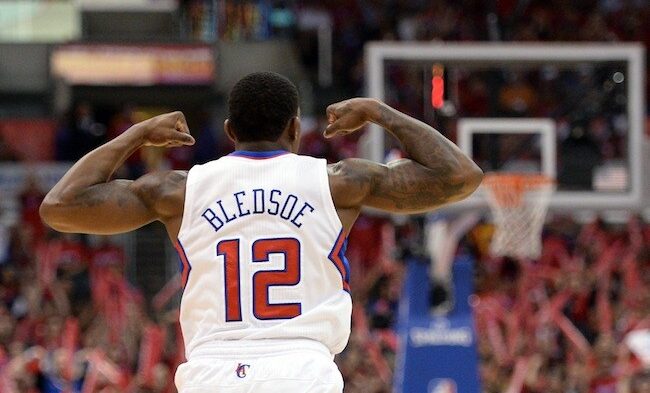 According to ESPN’s Adrian Wojnarowski, the LA Clippers have traded Patrick Beverley, Rajon Rondo, and Daniel Oturu to the Memphis Grizzlies for Eric Bledsoe:

The move consolidates LA’s guard depth, as Beverley and Rondo were occupying two veteran backup point guard spots in front of 33rd overall pick Jason Preston, who also has a guaranteed contract on the 15-man roster for next season. With Preston and fellow rookies Keon Johnson and Brandon Boston both with guaranteed deals to be on the 15-man roster next year and Kawhi Leonard likely to miss much or all of the season following ACL surgery, roster spots were at a premium for LAC and it didn’t make sense to carry as many guards as they had on the team after their draft and re-signing Reggie Jackson.

With their draft and free agent classes official, the Clippers had 16 guaranteed contracts on the roster, and only sophomore big man Daniel Oturu as a third string option at PF/C. In order to reach their final 15-man roster, it seemed likely that they would need to make a 2-for-1 consolidation guard trade (likely involving Beverley and Rondo) while also cutting Oturu and replacing him with a veteran free agent big. With Oturu’s salary thrown into this Memphis trade, the Clippers now have a more balanced roster and one open spot to use on big man depth:

By adding a depth 4/5 and factoring in the Clippers’ ability to utilize Winslow at power forward and Mann or Johnson at small forward, it becomes much more feasible for the Clippers to put together a respectable 82-game rotation. (Jay Scrubb is on the roster on a two-way contract, whle Amir Coffey has an outstanding qualifying offer and could still end up back with the team, either in the other two-way spot as they sign a min salary depth big to the 15-man roster, or vice versa)

Bledsoe, for his part, is no savior. The former Clipper was a fixture on the Milwaukee Bucks for recent years before being traded after consistently underwhelming playoff performances, and became a scapegoat for the New Orleans Pelicans falling drastically short of expectations last season (he wasn’t good, and certainly seemed to be coasting a bit, but he was far from the team’s only problem). He was named to the All-Defense 1st team in 2019 and 2nd team in 2020 as part of a stellar Milwaukee system, so the Clippers should be at least optimistic that they can get a similar impact on that end of the floor from Bledsoe as they were getting from Beverley.

While Bledsoe is a worse three-point shooter than Patrick Beverley, whose spot in the offense and rotation he replaces, he’s a better downhill player, which could be a useful addition to an offense that lacked dribble penetration last year and will need to replace Kawhi Leonard’s offensive creation by committee next season. To make up for Kawhi’s absence, LAC will of course need increased contributions from mainstays like Jackson, George, and Morris as well as steps forward from younger players like Kennard and Mann. While Bledsoe is probably an overall lateral replacement for Beverley, that difference in skillset makes some sense for a Clippers team in a transitional year while they attempt to endure Leonard’s injury. It’s also not an insignificant factor that Bledsoe has been a much healthier player than Patrick Beverley over their respective careers, meaning that LAC is now more likely to get a higher number of minutes and games from their backup point guard after this trade.

In terms of salary cap, the Clippers’ picture didn’t substantially change here. Beverley and Rondo were both expirings, while Eric Bledsoe’s $19.4M contract for the 2022-23 season is only guaranteed for $3.9M (though the team won’t be in a position to gain cap flexibility by cutting him and saving that money). The terms of the deal did work out fortuitously insofar as Beverley and Oturu are enough to bring back Bledsoe’s contract by themselves, meaning the Clippers were able to create an $8.25M trade exception for Rondo’s salary. Due to their luxury tax situation and the trade market, it probably makes more sense for them to just sign a minimum-salary depth guy for the time being and explore opportunities to buy low on a role player in that price range. The exception is good for one year from whenever this trade is officially processed, meaning LAC can look for opportunities to use it at this season’s trade deadline as well as next summer’s draft and in next year’s free agency window.